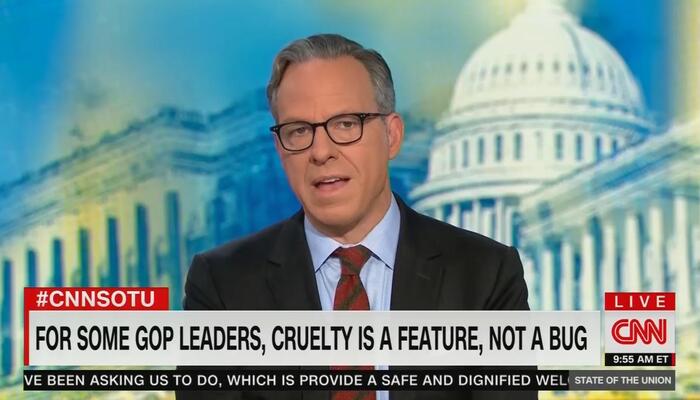 It was probably the worst day of Alec Baldwin’s life when he accidentally shot and killed cinematographer Halyna Hutchins on the set of the movie Rust on October 21. It’s a time to feel terrible about a 42-year-old woman with a husband and a young son. 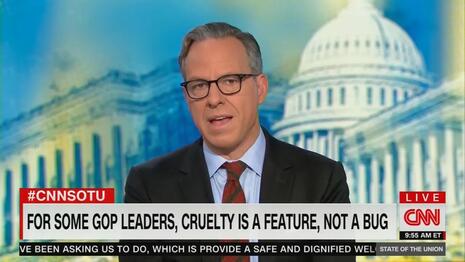 Then CNN’s Jake Tapper used it in one of his commentaries to denounce the entire Republican Party for making this tragedy an occasion for jokes. “There’s something about our politics right now that is driving people away from our shared humanity.”

Tapper was upset that Rep. Lauren Boebert recalled a tweet from December 5, 2014 where Baldwin wrote “I’m going to make bright, banana yellow t-shirts that read ‘My hands are up. Please don’t shoot me.’ Who wants one?” This was about the false claim that Michael Brown said “Hands up, don’t shoot” in Ferguson, Missouri in August 2014, when in reality, Brown was reaching into a car for a policeman’s gun.

But Baldwin’s commentary on shootings is much worse than that. In a February 17, 2006 blog post on The Huffington Post about Vice President Dick Cheney accidentally shooting his friend (non-fatally) during a hunting trip, Baldwin had no decency. “Cheney is a terrorist. He terrorizes our enemies abroad and innocent citizens here at home indiscriminately. Who ever thought Harry Whittington would be the answer to America’s prayers.[?] Finally, someone who might get that lying, thieving Cheney into a courtroom to answer some direct questions.”

That wasn’t the only passage that reads extra-terribly now. He had to make a shoot-Scooter-Libby joke. “Cheney’s the guy who told Libby to out Valerie Plame. The rumor I heard is that someone yelled, ‘Look out! Shooter’ and Cheney thought he said Scooter and fired in that general direction.”

A few days later, after hearing complaints, Baldwin insincerely apologized: “How about something more measured, then? How about…a lying, thieving Oil Whore. Or, a murderer of the U.S. Constitution?” 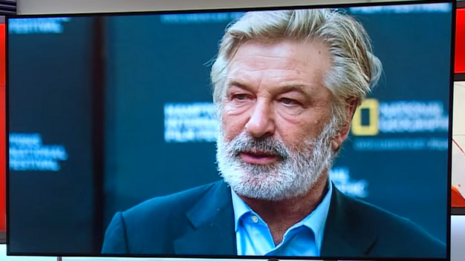 In our decency, we would hope Baldwin doesn’t have to go to court for this shooting. But the title of Baldwin’s 2006 opus was “Will Cheney and Whittington go to court? I would imagine if a guy with a few beers in him shoots you in the face…”

This isn’t the only Cheney-and-death “humor” Baldwin composed for Arianna Huffington. On the Fourth of July, 2006, Baldwin cooked up a double-murder fantasy, in which he dispatched Osama bin Laden with a box-cutter and “I gather up the body of the world’s most notorious terrorist and hurl it over the balcony. Then, in the final stroke of luck, bin Laden lands on Dick Cheney. God bless America.”

(Weird note: The byline on these articles now is “zak plus 1 from MT,” as is every Alec Baldwin article in today’s HuffPost archive.)

Jake Tapper made almost no attempt to factor in Baldwin’s well-known penchant for hate speech beyond this: “Baldwin, is, of course, not only a progressive but very aggressive and outspoken about liberal issues, including gun control.”

He even brought up Liz Cheney as the example of the Decency Republican in contrast to bomb-throwing Marjorie Taylor Greene. But he couldn’t recall 2006!

Tapper’s thunderous editorial concluded with some anonymous Republican messaging him that “being a horrible person is now actually a job requirement in this party,” and added “I hope to God that that Republican official was wrong.”

Does Alec Baldwin deserve decency now? In the spirit of Christian charity or “shared humanity,” yes. But armed with the memory of Baldwin’s long record of indecency, that would be extremely kind and merciful.