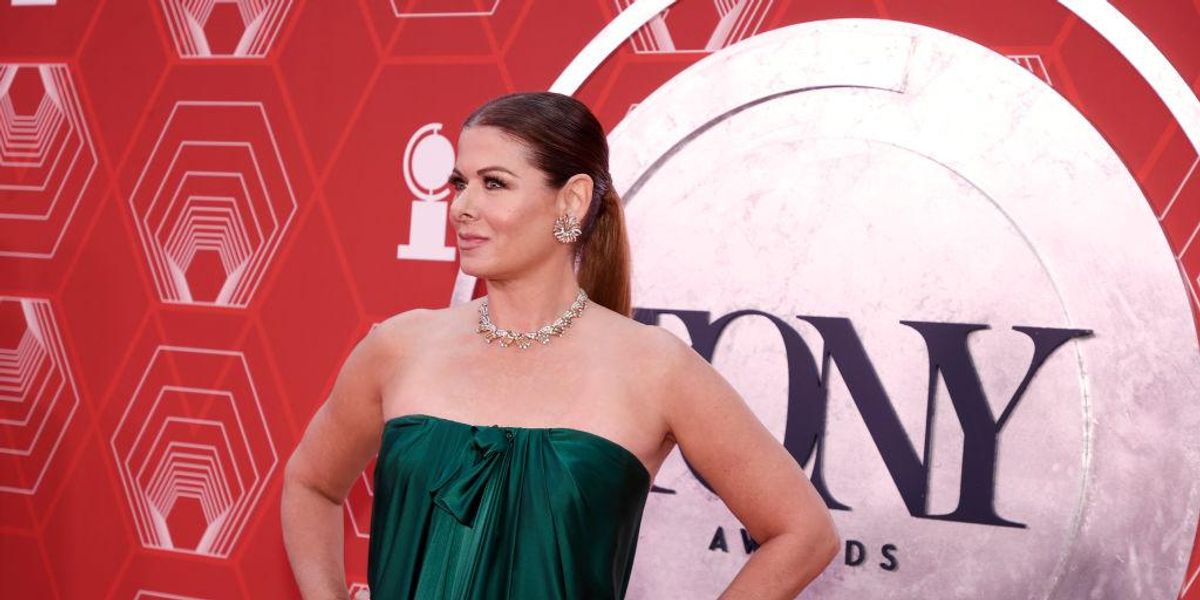 Actress Debra Messing attempted to draw a parallel to the hate hoax carried out by alleged Democratic activists against Virginia Republican gubernatorial candidate Glenn Youngkin on Friday to the white supremacist “Unite the Right” rally that took place in 2017 in Charlottesville, Virginia. The actress turned Democrat activist reacted to the bizarre political stunt by claiming that “Republicans still defend the Nazis” from the Charlottesville rally.

A political scheme with a mission to embarrass Youngkin and hurt his election prospects was executed on Friday. Alleged Democratic activists were planted in front of Youngkin’s campaign bus. The four men and one woman wore khakis and white button-down shirts while holding tiki torches – the same aesthetic that white supremacists had during the “Unite the Right” rally in Charlottesville on Aug. 11, 2017. Anti-Trump group the Lincoln Project took credit for the race hoax – but only after reports that the alleged white supremacists were Democratic activists.

These men approached @GlennYoungkin’s bus as it pulled up saying what sounded like, “We’re all in for Glenn.” Here… https://t.co/MwHz1ix5ud

Several Democrats tripped over themselves to attack Youngkin over the stunt that appears to have used Democrat activists posing as white supremacists – including Democratic Rep. Eric Swalwell of California and members of McAuliffe’s campaign team.

McAuliffe’s spokesperson Christina Freundlich retweeted a post from the local reporter who covered the incident. Freundlich said in her retweet that “The Unite the Right rally was one of the darkest days in the Commonwealth’s history. this is who Glenn Youngkin’s supporters are.”

“This is disgusting and disqualifying,” said Jenifer Goodman, a communications staffer for McAuliffe, in another retweet of the local Virginia reporter’s initial coverage of the incident. Both tweets have since been deleted.

Charlie Olaf – McAuliffe’s social-media manager – also treated the race hoax as a real white supremacy demonstration by writing on Twitter, “Disgusting reference to the 2017 Unite the Right Rally in Charlottesville.”

Do you see how casually Democratic operatives play with racism and race accusations, like it’s their little private… https://t.co/HXcJZhO6zF

Messing alleges that she did not fall for the race hoax, but she did use the political stunt to make an unsubstantiated attack on Republicans.

“Oh I didn’t fall for it, nor do I approve of it, but the POINT is Republicans still defend the Nazis with tiki torches at #Charlottesville, & now there is faux outrage bc they don’t want voters reminded of their most loyal ( and welcomed) supporters,” Messing tweeted on Friday.

Messing continued to utilize the Lincoln Project chicanery to link Youngkin to the Charlottesville Nazis from 2017.

“Interesting. The reminder that @GlennYoungkin tacitly approved of the #Charlottesville Nazis is making more people outraged than the actual Nazis,” the former “Will & Grace” actress said.

Interesting. The reminder that @GlennYoungkin tacitly approved of the #Charlottesville Nazis is making more people… https://t.co/lqwhmlz12a

Messing did appear to fall for a tongue-in-cheek article from the satirical website Babylon Bee.

Messing shared a Babylon Bee article with the headline: “KKK Member Posing By Glenn Youngkin’s Bus Turns Out To Be Ralph Northam,” a reference to the allegations that the Democratic governor of Virginia was dressed in racist costumes featured in his 1984 medical school yearbook.

Messing retweeted the fake article with the caption: “Wait WHAT???”