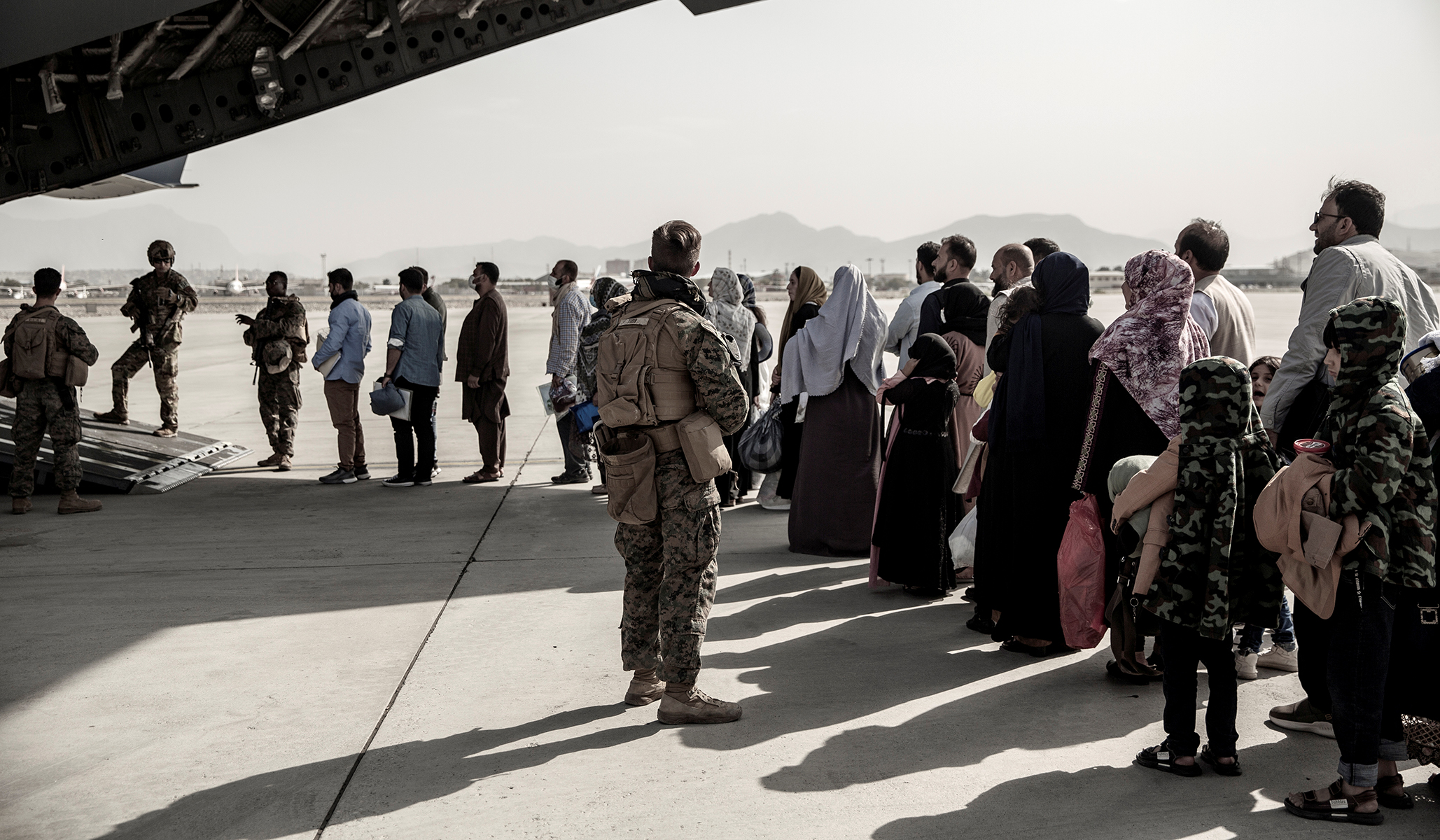 On the menu today: The State Department believes that as many as 14,000 legal permanent residents of the U.S. remain in Afghanistan, 77 days after President Biden pledged that, “If there are American citizens left, we’re going to stay until we get them all out”; the White House deputy press secretary insists that the president supports a proposal he called “garbage” the day before; and the Biden administration maintains that enforcing the employer vaccine mandate will have no impact on the supply chain at all.

Because it cannot be emphasized enough, President Biden told ABC News unequivocally on August 19 that the U.S. would not leave any Americans stranded in Afghanistan: “If there are American citizens left, we’re going to stay until we get them all out.”

It is an odd and frustrating hallmark of the disastrous U.S. withdrawal from Afghanistan that we can get more specific information about Americans still in that country from the San Juan Unified and Sacramento City Unified school districts than from the federal government.

In some cases, like the number of legal permanent residents remain in Afghanistan, the Biden administration may simply not want to know:

The State Department believes as many as 14,000 U.S. legal permanent residents remain in Afghanistan, Foreign Policy has learned, as the agency faces increasing scrutiny from Congress about the status of U.S. citizens and green card holders that are still stranded in the Taliban-controlled country.

The finding, disclosed by a congressional aide familiar with the matter, has been transmitted by the State Department to aides on Capitol Hill in private, but officials demurred on revealing the figure when questioned by Republican lawmakers on Wednesday, insisting the agency doesn’t track the figure.

“Isn’t the operating assumption about 14,000?” Republican Rep. Chris Smith asked Brian McKeon, deputy secretary of state for management and resources, at a hearing on Wednesday, referring to the figure briefed in private.

If it isn’t the job of the U.S. State Department to keep track of legal permanent residents who are in a country under the control of a hostile force . . . whose job is it?

Secretary of State Antony Blinken said on CNN this past Sunday that it was hard for the administration to get a precise figure of how many Americans were left in Afghanistan because more Americans keep coming forward and asking for help getting out. “More people have come forward in two ways. There were some small number of Americans in Afghanistan who didn’t want to leave who’ve now seen that we’ve successfully been able to get some of the few remaining Americans out who’ve now come forward and said, we do want to leave. And there are a couple of hundred of those who are ready to leave. And we will work to get them out.”

Based upon past administration statements, that “a couple of hundred” figure is just a guess.

State Department spokesman Ned Price said on Wednesday that, “As of today, we have assisted in the departure of 377 U.S. citizens and 279 lawful permanent residents. That’s in addition to a number of Afghans to whom we have a special commitment. There have been two additional flights, two flights yesterday.”

That comes out to 659 U.S. citizens and lawful permanent residents who have left Afghanistan in the past two months — well below the estimate of “100 to 200 Americans” remaining in the country that Biden administration officials kept repeating during and after the evacuation of U.S. military forces (my emphasis):

August 30: Secretary of State Antony Blinken said that, “We believe there are still a small number of Americans — under 200 and likely closer to 100 — who remain in Afghanistan and want to leave.”

August 31: Biden said that, “Now we believe that about 100 to 200 Americans remain in Afghanistan with some intention to leave.”

September 5: Chief of Staff Ron Klain said that, “We believe it’s around 100. We’re in touch with all of them.”

September 10: State Department deputy spokesperson Jalina Porter said that, “So again, the situation on the ground is really fluid, and 100 is the number that we have for U.S. citizens.”

Now we see why the Biden administration has relentlessly emphasized the number of U.S. citizens remaining in Afghanistan and simply avoided the topic of how many legal permanent residents, a.k.a. green-card holders, were left in the country. The U.S. citizen number is an embarrassment; the legal permanent resident number is a colossal and unforgivable policy failure.

Green-card holders can apply for U.S. citizenship after three to five years and enjoy almost all the benefits of American citizenship except voting. Under U.S. law and policy, the two groups are not treated differently when it comes to evacuations. According to the website of the U.S. Embassy in Afghanistan, when it came to the evacuation, citizens and lawful permanent residents were equal priorities: “The Department of State’s efforts are devoted to evacuations at Hamid Karzai International Airport (HKIA). Our first priority is U.S. citizens and lawful permanent residents (LPRs) of the United States, along with eligible family members.”

And yet somehow, the administration left 14,000 or so legal permanent residents behind when U.S. military forces left.

Price said that the State Department is still working out how to process the visas of Afghan Special Immigrant Visas without an embassy for in-person meetings:

We are continuing to process SIV applicants, Special Immigrant Visa applicants, at all stages of the application process. When it comes to SIV holders, those who have completed the process, we have been able to work with a number of them to facilitate their departure from Afghanistan if they have chosen to do so. But again, for everyone at every single stage of the process, we are continuing to support them. And for those who are beyond a certain stage in the process, we are looking at processing alternatives, knowing that we are no longer able to provide consular access and consular support on the ground in Kabul, although we do have a team on the ground in Doha that — where we are working many of these issues as well.

But there is at least a little good news from the San Diego area about Americans getting out of Afghanistan:

The Cajon Valley Union School District in East County says that the last family with students from El Cajon who were trapped in Afghanistan is heading home.

The families were unable to leave amid the chaos when U.S. troops pulled out in mid-August after 20 years of occupation.

Meanwhile, as Afghanistan faces a nearly unprecedented humanitarian crisis, the new kinder and gentler Taliban is enforcing a ban on female international-aid workers:

The United Nations Office for the Coordination of Humanitarian Affairs (OCHA) has mapped the agreements between aid agencies and the Taliban in each of Afghanistan’s 34 provinces, showing where female staff members will be permitted to function. The document, reviewed by Human Rights Watch, indicates that, as of October 28, 2021, Taliban officials in only three provinces had provided a written agreement unconditionally permitting women aid workers to do their jobs. In over half the country, women aid workers face severe restrictions, such as requirements for a male family member to escort them while they do their jobs, making it difficult or impossible for them to do their job effectively.

This is another situation where the Biden administration’s oft-mentioned “enormous leverage over the Taliban” would come in handy, but it is nowhere to be seen.

Does the President Know What His Own Administration’s Positions Are?

Q: Mr. President, as you were leaving for your overseas trip, there were reports that were surfacing that your administration is planning to pay illegal immigrants who are separated from their families at the border up to $450,000 each, possibly a million dollars per family. Do you think that that might incentivize more people to come over illegally?

THE PRESIDENT: If you guys keep sending that garbage out, yeah. But it’s not true.

Q: So, this is a garbage report?

Q: That was separated from a family member at the border under the last administration.

THE PRESIDENT: That’s not going to happen.

Principal deputy press secretary Karine Jean-Pierre said on Thursday that, “If it saves taxpayer dollars and puts the disastrous history of the previous administration’s use of zero tolerance and family separation behind us, the President is perfectly comfortable with the Department of Justice settling with the individuals and families who are currently in litigation with the U.S. government.”

ADDENDUM: The Biden administration’s position is that the impending vaccine mandates will not have any impact on the U.S. supply-chain and labor-shortage crisis:

Q: How did concerns about the supply chain and the possibility of workers maybe quitting because of these mandates play into that decision and that timing?

Principal Deputy Press Secretary Karine Jean-Pierre: So, I mean, if you’re asking like if we think the rules impact supply chain, the answer is: No, we don’t think that it will. First of all, vaccine requirements work. We have talked about that.

Oddly, the National Association of Wholesaler Distributors see it differently: “There are still employees across the distribution industry who — for whatever reason — refuse to be vaccinated. This reality will present new challenges if this Executive Order is implemented as written: thousands of valued employees will be forced out of their jobs shortly before the holidays, the already compromised supply chain will be under added pressure during the busiest time of the year, and the already tight labor market will make it immeasurably more difficult to replace laid off employees, compounding supply chain disruptions.”

New Poll Finds Significant Number Of Democrats Doubt Joe Biden’s Mental Fitness For Office
Florida man sues; says sheriff recklessly featured him on ‘Wheel of Fugitive’ spoof video when he was in jail
After Attack on Israeli Synagogue, United Nations Displays Intense Hypocrisy
‘If you need to arrest me, I understand’: US Marine allegedly flew from Louisiana to Florida to have sex with 14-year-old girl he met online
It’s Beginning to Look a Lot Like World War III