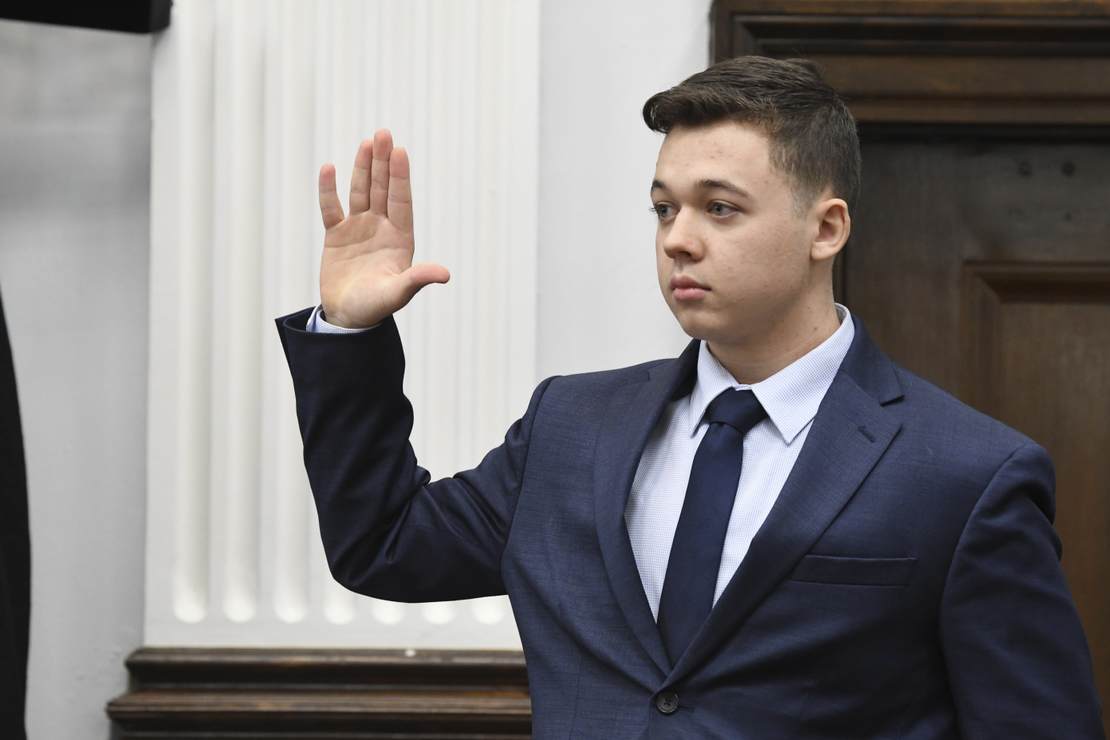 Let us note this moment in time when the devolution of self-defense came to this:
Mr. Rittenhouse, I remind you that you’re under oath. Shouldn’t you have let him kill, maim, bash, stomp, thwack, shoot, roundhouse kick, jab, or connect with that haymaker before you pulled your trigger?

This is where we are.

You won’t find those exact words in the transcript of the Kyle Rittenhouse murder trial, but, make no mistake, the idea was in there.

The law-fare crowd, which apparently enjoys the membership of woke Assistant District Attorney Thomas Binger, asked the now gray-bearded Kyle Rittenhouse — on this earth lo 18 years — if he should have known that Joseph Rosenbaum, the bipolar child rapist who threatened to — quoting here — “I’m going to cut your f***ing hearts out and f***ing kill you…if I catch any of you f***ers alone!” was just a pussy cat. That pshh, chasing the then-17-year-old kid after uttering those words with his buddy armed with a pistol WHO FIRED IT, was no big deal. Settle down, people. Don’t shoot unless you’re shot at. That guy bashing your head with a skateboard doesn’t deserve to get shot or die! That poor man pointing a gun at you was no match for your scary-looking, powerful gun, so why not let him shoot you first–because you know what? It’s just not fair. They are not a threat. Sure, they were setting fires and knocking over porta-potties and setting trailers on fire, but they’re just rioting. They’re just looting. They’re just arsonists. They’re not hurting anyone, especially you, when they threaten, chase, and fire a gun behind you and grab for your gun.

But you see, self-defense isn’t like the rules of engagement in Iraq or Afghanistan.

Indeed, as PJ Media reported, self-defense in the Kyle Rittenhouse case comes down to five things, as enumerated by use-of-force expert and attorney Andrew Branca.

Here are a series of gobsmacking questions prosecutor Thomas Binger asked Kyle Rittenhouse in the trial on Wednesday. I’ve edited for brevity and clarity.

The first tranche of dumb and insulting questions was about Joseph Rosenbaum.

Binger: You could have kept running [from Mr. Rosenbaum],couldn’t you? You had the gun strapped to your body, correct?

B: The strap is designed to keep the gun on your body so it doesn’t come off, correct? [intimating that at that moment it was perfectly reasonable to think that a man grabbing his gun wouldn’t possibly get possession of it]

R: I never wanted to shoot him. Starts tearing up

B: You understand that that puts someone else in fear of being killed?

R: He was chasing me

B: You understand that when you point your AR 15 at someone else, that may make them feel that they are about to be killed by you

And the intelligence-insulting questions about the man who kicked Rittenhouse in the face, bashed his head with a skateboard, and pulled a gun on him went like this:

Well, yes, actually, it is all about Kyle Rittenhouse’s safety and whether or not he was beaten, jumped, kicked, whacked, etc., because it turns out that it is Rittenhouse, and Rittenhouse alone, who is on trial for murder. So, yes.

Related: Kyle Rittenhouse Takes the Stand in Trial for His Life: ‘I Didn’t Do Anything Wrong, I Defended Myself’

Even though the prosecutors in the case are pretending not to know how self-defense works and are counting on the Kenosha jury members not knowing, here’s the way it really works.

If a person is in reasonable fear for his life or great bodily injury, in which he is not the initiator of the violence, he can claim self-defense.

Andrew Branca, a use-of-force lawyer who runs the Law of Self Defense website, says there five key elements in self-defense:

Innocence: You can’t have started the fight.
Imminence: You are in imminent danger of great bodily injury or death.
Proportionality: Use deadly force if you are confronted with deadly force.
Reasonableness: Were you reasonable in your reaction?
Avoidance: Run away if possible before using deadly force.

Remember, Kyle Rittenhouse claims self-defense on all four charges against him in which he discharged his weapon. In the first case, the defense claims Joseph Rosenbaum lay in wait, chased, lunged, and grabbed Rittenhouse’s weapon. He’s dead now. In the second case, mere moments later, as the mob converged to “Get him! Kill him! Cranium him!”, people hit Rittenhouse as he ran toward police. One delivered a haymaker to the back of his head. Then an unidentified man kicked Rittenhouse in the face while wearing work boots. Rittenhouse got off two shots to stop the threat and neither hit the man. Following that assault, Anthony Huber decided to have a go, slamming his skateboard against Rittenhouse’s neck and skull, as he lay on the ground after the first attacks. Then Gaige Grosskreutz drew a pistol on Rittenhouse.

Grosskreutz and those trying to rehabilitate the “heroism” of a skater boy, 26-year-old Anthony Huber, said Rittenhouse was an “active shooter.” Odd then that Rittenhouse shot people attacking him and not other, random members of the mob.

On the other hand, things happened within seconds.

Which brings us to the main point.

Was Rittenhouse wrong to shoot?

And if he’s brought up on charges, why would Joshua Kiminski, Rosenbaum’s gun-firing friend, not be brought into court to explain his behavior? Is he charged with a gun crime? Unsolved mystery.

And Gaige Grosskreutz possessed an unlicensed concealed carry pistol, and drew on a kid and then lied about it to the cops. Surely that matters, right?

No, it doesn’t. And that’s just one of the many problems with the prosecution of this case.

It’s simply not how any of this works at all.

To get exclusives and the latest news on the Rittenhouse trial, use promo code 2022 this week only for a 40% discount on your new PJ Media VIP subscription. It is the largest discount we have ever offered. Make sure you have the news you need.

SHOCK: CBS’s O’Donnell Pushes Back on Gavin Newsom’s Anti-2A Lies
Aretha Franklin’s “Natural Woman” Deemed Offensive by Trans Community
Majority of Americans support investigation into Anthony Fauci over pandemic management and inconsistent testimony, national study shows
Frontal nudity to be ALLOWED on Facebook to appease the trans thought police
Man accused of posing as psychic so that he could repeatedly rape his daughter’s 11-year-old friend, collect nude pictures of her