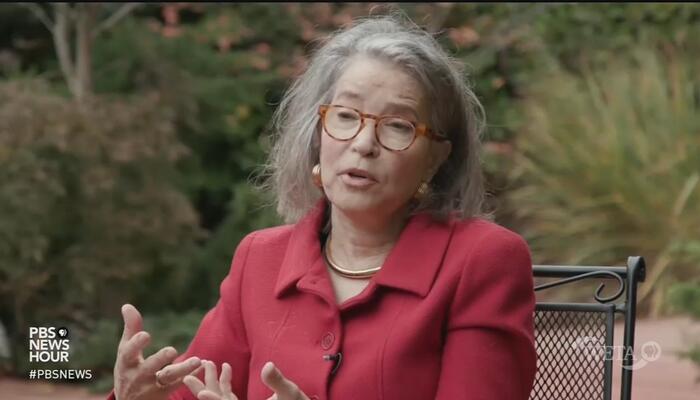 As the COP26 climate summit raged in Glasgow, Scotland, the past couple of weeks, PBS churned out plenty of taxpayer-funded doom and gloom predictions, and, at worst, even seemed to defend the irrational “climate anxiety” felt by some school children who have sadly been indoctrinated by the liberal media on the issue.

On Wednesday’s show PBS NewsHour, anchor Judy Woodruff relayed results from a poll commissioned by PBS NewsHour and Generation Lab, finding that substantial percentages of children believe climate change will effect important life issues for them later on like having children or where they live.

The show then devoted eight minutes to the issue by showing a pre-recorded piece by correspondent William Brangham. One high school student featured in the piece, Sofia Palau, recalled suffering from panic attacks, and having difficulty studying for the ACT because she kept thinking of the “impending doom.”

Just when it seemed like the report might introduce some balance as Brangham noted critics, who would argue that such worry is unjustified, he then showed a psychiatrist who argued that children are wise to have such anxiety:

Much of the show’s reporting on the summit has featured precisely the kinds of unsubstantiated frightening predictions without any arguments that the theories are overblown. Brangham blamed fossil fuel use for allegedly worsening storms, flooding, and wildfires, in spite of studies arguing that such extreme activity has not reached record levels.

Of course it wasn’t mentioned how bad the environmentalist left’s track record has been on this issue. Although one featured scientist did mention that when he got started studying ice samples in the 1970s, it was widely believed that the world was heading toward an ice age. (This conventional wisdom was notably featured in an episode of In Search of in 1978.)

The show also pushed arguments that wealthy countries have victimized poor countries by causing deadly natural disasters to be worse.

This one-sided environmental alarmism was paid for in part by Fidelity and Consumer Cellular. You can fight back by letting advertisers know how you feel about then sponsoring such content.

Leaders, researchers and activists all say that humans are at a tipping point to reduce emissions.

BRANGHAM: It’s pain that was shared across Belgium and Germany this summer where catastrophic floods killed more than 200 — 6,000 miles away in the Philippines, 61-year-old  Luzviminda Tezon fears she and her family will face a similar fate, their home swept away in a flood.

…one of the hundreds who died in a brutal heat wave. … Just south of them on the same coast in the same summer, the Caldor fire took Chris Sheean’s home. … Four lives among millions more distorted and lost this year alone from the impacts of climate change. A warming atmosphere isn’t the sole cause of these disasters, but the evidence grows clearer every day that fossil fuel emissions make the calamities more frequent, more severe, more deadly.

ANTONIO GUTERRES, U.N. SECRETARY GENERAL: It’s time to say, “Enough. Enough of brutalizing biodiversity, enough of killing ourselves with carbon, enough of treating nature like a toilet, enough of burning and drilling and mining our way deeper. We are digging our own graves.”

KIM COBB, GEORGIA INSTITUTE OF TECHNOLOGY: We have warmed 1.1 degrees Celsius since the pre-industrial era. To double or triple the kinds of impacts that we’re seeing, that’s a two or three degrees Celsius world, and that is not a world that would be remotely recognizable to those of us sitting here today, already reeling from the effects of a 1.1 degree Celsius world.

BRANGHAM: Unrecognizable to us?

BRANGHAM: Right now, climate change is forcing massive migrations. One recent analysis said climate-related events drive twice as many people from their homes as war and violence. Two weeks ago, the Pentagon, the White House, DHS, and the director of National Intelligence all echoed this concern that, quote, ”The climate crisis is reshaping our world,” and that these migrations could trigger “political instability and conflict.”

BRANGHAM: There’s no doubt that Joe Biden is in Glasgow right now with a weakened hand. Last week, a major climate tool was taken out of his toolbox by Joe Manchin. The Build Back Better has some elements that are potent climate tools, but we do know that Manchin is still dubious about that. So it’s very difficult for the United States to cajole other nations to act boldly on this issue when we have a hard time doing it here in the U.S.

LONNIE THOMPSON, OHIO STATE UNIVERSITY: We started in the 1970s – in the 1970s, people were concerned about the Earth getting colder and going into another ice age.

BRANGHAM: Bangladesh represents one of the great cruelties of climate change — those that have done little to cause the problem are paying the biggest price. Bangladesh emits less than half of one percent of the global greenhouse gases that are warming the planet, but suffers disproportionately from that warming. This low-lying country has always been vulnerable to flooding, but climate change has intensified storms, pushed saltwater further inland, and now driven an estimated 10 million people from their homes.

BRANGHAM: One reason for that inequality is the failures of the world’s richest countries to fully deliver on a promised $100 billion a year, starting in 2020 to help poor countries adapt to climate change.

JUDY WOODRUFF:  In a recent PBS NewsHour survey, in partnership with the Generation Lab, children and young adults said they expect climate change to have major implications for how they live. Nearly two-thirds said that climate change will influence where they decide to live. More than half said it will change how and where they travel.

And a third said it would affect their decision to have children. That’s on top of growing research that shows that young people are increasingly experiencing what’s now known as “climate anxiety.” Our William Brangham has this report about young people’s lives and how they see their future.

BRANGHAM: These young protestors in downtown San Francisco are frustrated by what they see as inaction on climate change.

CLIP OF PROTESTERS: What do we want? Climate justice! When do we want it? Now!

BRANGHAM: They’re also here because they’re worried about their own futures.

BRANGHAM: Seventeen-year-old Sofia Palau is a member of an organization called “Youth Versus Apocalypse.” It organized today’s protest. Palau says the group’s name is no exaggeration.

PALAU: Truly, what we are facing right now is the apocalypse. When people think, “Oh, no one’s going to die of climate change,” then they’re already discounting the — all of the people who have died in California wildfires, or all of the people who’ve died in hurricanes, or islands that are slowly going underwater, and people’s lives who are being uprooted.

BRANGHAM: Palau says, thinking about climate change is overwhelming at times. It makes her nauseous — it makes it hard to concentrate at school.

PALAU: It’s very stressful. Like, last weekend, I had my ACT, but all I could think about was impending doom.

LISE VAN SUSTEREN, CLIMATE ANXIETY ALLIANCE: It’s clear that we have passed certain tipping points already, that have convinced children that they are in trouble, that their futures are imperiled.

BRANGHAM: Lise van Susteren is a member of the Climate Psychiatry Alliance that’s training more therapists to recognize and treat this growing anxiety.

BRANGHAM: Do you share any of the concern that some critics share, that we’re overly scaring children? That the entire youth climate movement is stirring up fears that are terrifying kids inappropriately?

VAN SUSTEREN: That is a common reaction among some people who do not want to face the reality. The kids are not dreaming this up. They aren’t living in a cave. They have seen it with their own eyes. It’s no longer just scientists telling them. They have seen what is happening. And for us to sweep this under the rug, makes them feel even worse.

WOODRUFF: You talked about the issue of money, specifically whether the wealthier nations owe something to the poorer, developing nations who have suffered the consequences of what many of these wealthy countries have done. Has there been any progress on that issue this week?

BRANGHAM:  Yeah, that’s right, Judy. To many people’s surprise, this issue has gotten some real traction. And as you said, developing nations argue, “The wealthy world built its economy on coal and oil and gas, and those emissions hurt us, and we are owed something for that.

One Person Inspired an Insurrection, the Other Is Brandon Straka
Klain Is Jumping Ship Too Late to Save Biden’s Presidency
NBC Dishonestly Hypes Lawsuit Against DeSantis for Banning CRT
Employees At Google Demand ‘Psychological Safety’ From Their Bosses After Layoffs
Gov. Kristi Noem says her personal cell phone was hacked and blames Jan. 6 committee