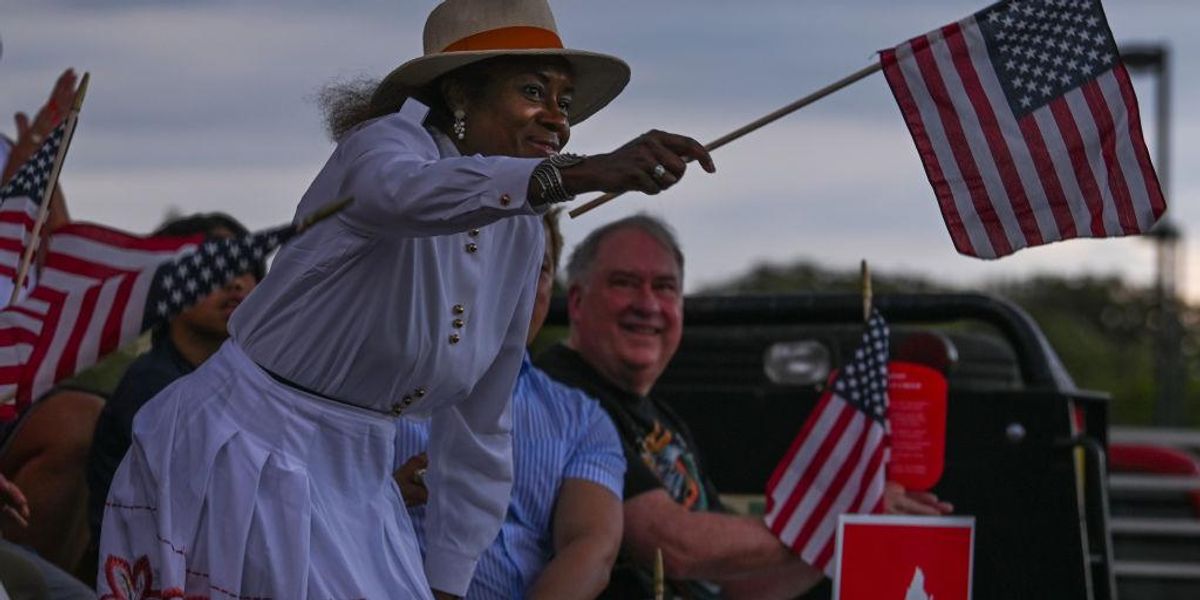 On the campaign trail, Sears refused to adopt the victim mentality that many do.

“When you tell me that I’m a victim … how? Tell me how,” she said during a campaign speech. “Everything I’ve had, I’ve had to work for. Everything.”

During her victory speech, Sears emphasized that her political success is the result of the “American dream.” Following the Glenn Youngkin gubernatorial win, the Jamaican immigrant turned naturalized citizen who formerly served as a U.S. Marine told her enthusiastic supporters, “This country had done so much for me, I was willing to die for this country.” She then led the crowd in a chant of, “U-S-A!”

Sears appeared on “Fox News Sunday,” where she rejected the politics of pitting black and white people against one another.

Host Chris Wallace asked her, “What do you think Virginia voters were saying on Election Day when they made you lieutenant governor?”

The lieutenant governor-elect added, “And they’re tired of politicians who won’t let the wounds of the past heal.”

“In case you haven’t noticed, I am black and I have been black all my life,” Winsome proclaimed. “But that’s not what this is about.”

Winsome exclaimed that she just wants to serve. Most of all, the Old Dominion graduate hopes children see her achievements and say, “Well, if Winsome can do it, I can do it, because I didn’t do anything special except stay in school and study. And I never let anybody walk over me. And if they did, they didn’t get a second chance.”

When Sears garnered the national spotlight during the Virginia gubernatorial election, where many Republicans outside of Virginia fell head over heels for the fiery 57-year-old former Marine when they took one glimpse of a viral photo of Sears posing with a rifle during a day at the range.

Beautiful day = Range day! nnMarines know how to use guns and I wonu2019t ever support a red flag law! The 2nd Amendment says u201cshall not be infringed!u201d #SemperFinnAlways good to see my friends at Clark Brothers Guns.pic.twitter.com/nNXq4SjazT

While Republicans embraced the gun-totin’ strong black woman, New York City liberals at “Saturday Night Live” attempted to spin a narrative of exactly the opposite of what was true.

During the Nov. 6 episode of “SNL,” “Weekend Update” host Michael Che attempted to paint Republicans as fearful of the former Marine holding a gun. Che based this opinion solely on skin color.

Che then attempted to make a joke as the progressive crowd laughed, “This is actually a win for Democrats because nothing will get Republicans to support gun control faster than this picture.”

Wallace asked Sears if she found the joke funny, and the military veteran fired back at the comedian and the chortling crowd.

“Well, I did, because I thought, ‘Well, I don’t think he knows what he’s saying.’ And the fact that his audience thought it was quite hilarious was also very telling about their character,” Winsome remarked. “So, you know, it’s a bunch of hypocrisy, but it’s all right. I can handle it. I’m a big girl.”

The Truth About How Baby Girls Are Being Exterminated In the United States…Are We Becoming China?
‘If you need to arrest me, I understand’: US Marine allegedly flew from Louisiana to Florida to have sex with 14-year-old girl he met online
PBS NewsHour Special Pushes Liberal Line on Guns and American Racism
Woke school district promotes upcoming BLM flag-hoisting event
Junior Varsity Basketball Player Suffers Seizure and Cardiac Arrest During Game