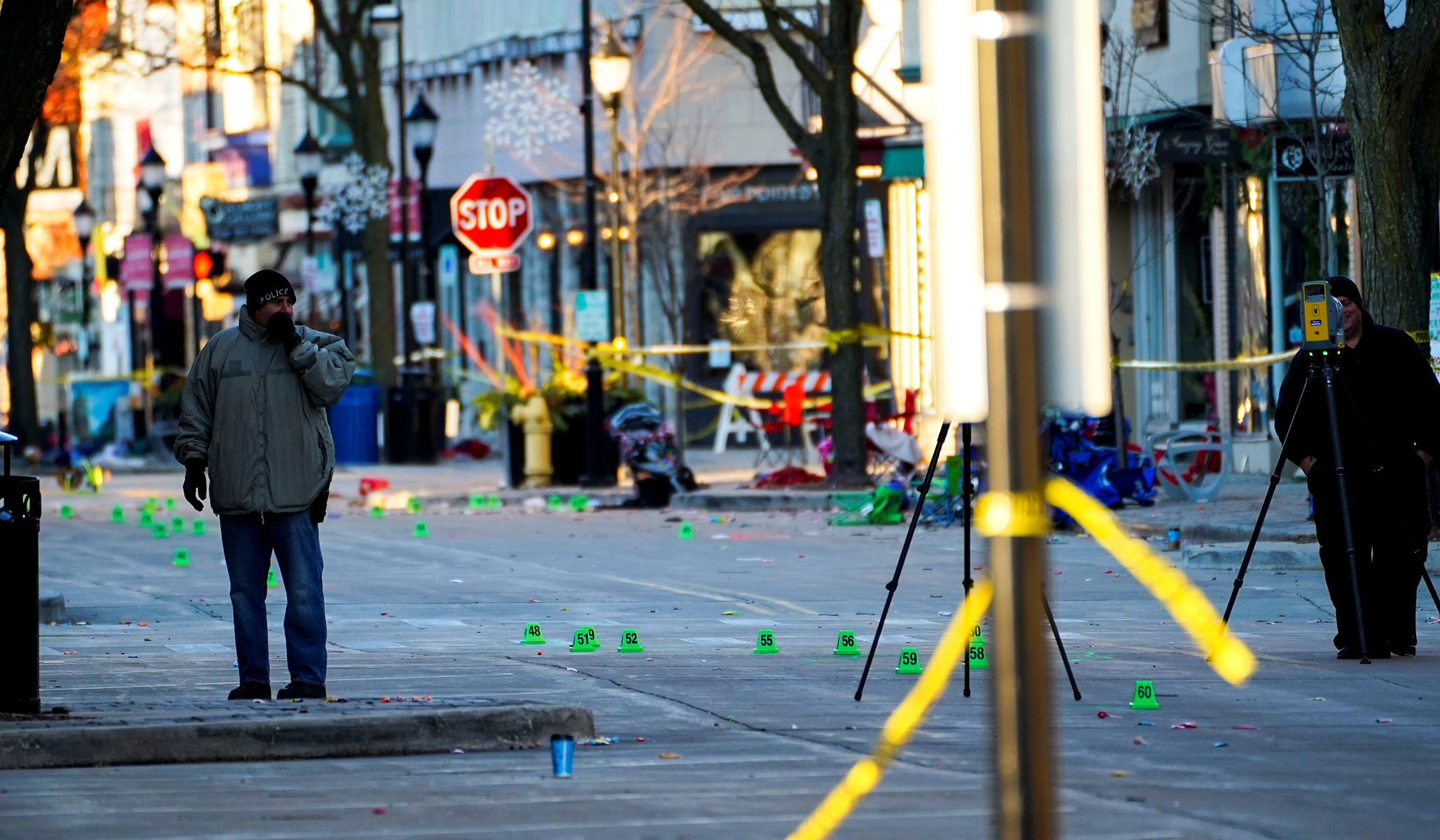 On the menu today: The perpetrator of the horrific vehicular homicide in the Waukesha Christmas parade has a long history of violent crimes and had recently been released from custody “in a strikingly similar case”; Congress hopes to get clear and sane answers out of Alex Jones; and the federal government finds a situation where it don’t care if you’re vaccinated or not. Thank God it’s a Tuesday that feels like a Friday.

Running People Over Is This Maniac’s Habit, Apparently

On Sunday night, Americans saw the horrific videos of an SUV plowing through innocent people in the Waukesha Christmas parade and wondered how something like that could happen. Now we know: A man with multiple serious criminal convictions, awaiting trial on charges of other acts of violent vehicular mayhem, and with malice in his heart, was walking free when he shouldn’t have been:

The suspect, Darrell Brooks Jr., 39, recently had been released from custody in a strikingly similar case, in which he was accused of driving over a woman during a domestic dispute, sending her to the hospital and leaving tire marks on her pant leg.

The Milwaukee County District Attorney’s Office, which is prosecuting that case, said Monday it was launching an internal review of a prosecutor’s “inappropriately low” $1,000 bail recommendation. The bail amount was signed off on by a court commissioner.

Investigators learned Brooks was involved in a “domestic disturbance” before he drove into the parade route, the chief said. There was a report of a knife being involved, but police were unable to confirm that as of Monday afternoon, he added.

Thompson said a police chase did not lead to the driver’s actions but Thompson said he would not be providing more details about the suspect’s motivations at this point. The chief said there was no sign the event was an act of domestic terrorism. Waukesha prosecutors expect to file formal charges Tuesday.

He has two open court felony cases in Milwaukee County. In July 2020, he was charged with three felonies after being accused of firing a gun during an argument with a relative.

He has been charged with crimes 10 times since 1999, when Brooks pleaded guilty at 17 years old to a felony charge of inflicting substantial bodily harm against another person, according to court records. He also has been cited for traffic and disorderly conduct offenses.

Brooks also had an outstanding warrant in Nevada, the USA TODAY Network confirmed late Monday. In 2016, police in the city of Sparks arrested him, saying he failed to obey sex offender laws. He posted bail but later failed to appear in court, records show.

Yesterday’s initial leaked explanation — “the suspect was fleeing another scene — possibly a knife fight — when he ran into the people at the parade” — did not make much sense; it is hard to envision someone fleeing a knife fight and just happening to drive through a barrier on a parade route, and then plowing through the parade marchers, killing five people and injuring 48, including a number of children. Whether or not this action meets a traditional definition of “terrorism,” it was clearly an attack, in the sense that it was deliberate. After the “domestic disturbance,” Brooks could have driven anywhere. For some as-yet-undetermined reason, he chose the parade route.

Andy Ngo found postings on social media that he contends are Brooks’s which were quickly shut down, indicating a hatred of whites, Jews, and expressing frustration about the Kyle Rittenhouse verdict. Those social-media posts, presuming they are indeed Brooks’s, do not by themselves prove that anger over the Rittenhouse verdict was what spurred Brooks’s rampage . . . but it certainly puts that motive within the realm of possibility. Waukesha police chief Dan Thompson said that there’s no indication that Brooks knew anyone in the parade or along the route.

Brooks’s extensive criminal history suggests that he may just be a violent, angry guy. But even by the standards of violent, angry men, driving your car through a Christmas parade and running over children is extreme.

Meanwhile, over on the front page of CNN, John Blake offers an “analysis” piece declares that, “There’s nothing more frightening in America today than an angry white man.”

Is he sure about that? Is the typical angry white man any more or less of a threat than Brooks, or an aspiring jihadist, or the enforcers of drug cartels? If you’re being assaulted or threatened by members of MS-13 in San Francisco, do you think, “Well, thank God these guys aren’t white, because those guys are really frightening?” Does anyone say, “Oh, we’re not worried about that murder connected to a sex-trafficking ring, it’s only the Bloods”? How frightening are Armenian-American criminal conspiracies, too swarthy to qualify as “white” and thus “most frightening,” or are they just white enough? How much sunscreen do you need to wear to qualify as among the “most frightening” in America?

Well into the piece, Blake concedes that, “There is nothing inherently violent about white men, or any human being.” Say, is it just possible that major news-site headlines that label any particular ethnic or racial group the “most frightening” in America are adding to the problem of racial tensions and reflexive demonization of other races instead of improving the situation? By writing that headline and putting it right on the front page, did CNN make the world a better place, or a worse place?

However, in the past, Chisholm has advocated for prosecutorial reform to eliminate the practice of keeping inmates in jails on cash bail, his previous tweets reveal.

In a tweet from December 18, Chisholm appeared to laud another district attorney’s position on prosecutorial reform, re-posting his quote which read: “We have really made a commitment to not keeping individuals held unnecessarily on cash bail in the Milwaukee County Jail.”

The example of Brooks doesn’t need to undermine the cause of criminal-justice reform, although it is likely to have that effect. The anti-recidivism efforts backed by groups such as the Koch network did not focus upon reducing criminal sentences. The aim was to ensure convicts returned to society with tools and skills designed to keep them away from a life of crime — opportunities to get graduate-equivalent degree as well as finding skills and work training and mentorship programs. The idea is that the convict has paid his debt to society, so now what? What do prisons, governments, and the public want to happen next?

But it is likely that the foreseeable risk of releasing violent criminals on low cash bails will soon undermine or reverse efforts at criminal-justice reform that were designed to end lives of crime and make everyone safer.

Congress, Just What Do You Expect Alex Jones to Tell You?

Gee, no chance that turns into a circus, right? I’m sure Jones will calmly, rationally, and clearly explain everything he knew — or “knew” — about the events leading up to January 6. The committee will be lucky if Jones doesn’t accuse them of turning frogs gay.

The committee no doubt has the authority to subpoena Jones. I just wonder what the heck they think they’re going to get out of Jones that is going to be all that useful. Giving Jones the spotlight, yet again, and giving him the opportunity to paint a picture that the government is out to get him, yet again, doesn’t feel like a particularly productive avenue of investigation.

Wait, This Is the Situation for Which the Federal Government Doesn’t Require Vaccinations?

Yet another example of how our federal vaccination policies make no sense: You need to be vaccinated to work for the U.S. Forest Service — which is going to involve a lot of outdoor work! — but you do not need to get vaccinated to get on a plane.

So, you absolutely need to be fully vaccinated and boosted to do your job, even if it’s outdoors, but getting into a thin metal tube with recirculated air for several hours with dozens or hundreds of strangers, a couple of whom are elbow to elbow with you . . . that’s the situation in which Pete Buttigieg and the Department of Transportation think you don’t need to be vaccinated.

ADDENDUM: On yesterday’s Editors podcast, I pointed to past examples of high-profile trials where a racially charged narrative gets set, and subsequent investigation reveals that the truth is quite different. I noted that those who fanned the flames of racial tension rarely come back and admit they had the story wrong. Morning Jolt reader and Editors listener Jeremy wrote in to remind me that Washington Post columnist Jonathan Capehart admitted he was totally wrong about Michael Brown and “hands up, don’t shoot,” in 2015, and as Jeremy notes, “It is still noteworthy for being so rare.”