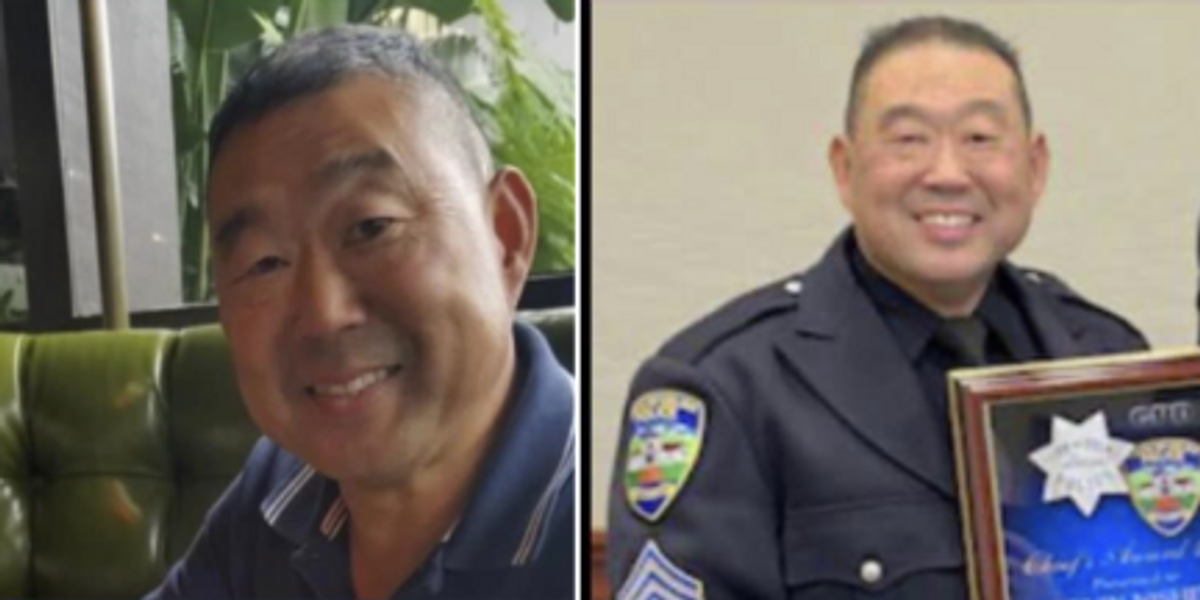 A former police officer turned security guard was gunned down while protecting a TV news crew in Oakland, California. Kevin Nishita succumbed to his gunshot injuries and passed away. A reward is being offered for information that leads to the arrest of the gunman.

On Nov. 24, a KRON-TV news team was covering the aftermath of a smash-and-grab robbery where 12 thieves raided a clothing store. At 12:20 p.m., an assailant allegedly attempted to steal KRON’s camera equipment. Nishita — who was providing security for the TV news crew — attempted to protect the KRON employees, but a gunman shot the security guard.

Nishita was shot in the lower abdomen, and rushed to the Highland Hospital. He was in critical condition and needed emergency surgery. Sadly, Nishita passed away at 4:39 a.m. on Saturday.

An onlooker was hit by bullet shrapnel, according to the Oakland Police Department. He was taken to a hospital, and is listed in stable condition.

The Oakland Police Department released a photo of the suspect’s vehicle: a 2004–2008 Acura TL, white, 4-door, with a sunroof and no front license plate.

A reward of $32,500 is being offered to anyone who provides information that leads to the arrest of the shooter. KRON and its parent company, Nexstar Media Inc.; Nishita’s employer, Star Protection Agency; and the Oakland Police Department donated to the reward fund.

Investigators with Oakland Police Department’s Homicide Section are asking anyone with information to contact them at (510) 238-3426.

Nishita leaves behind a wife, two children, and three grandchildren.

Prior to working as a security guard, Nishita served as a police officer at the Oakland Housing Authority, Hayward Police, San Jose Police, and the Colma Police departments.

Tributes poured in from police departments in the area.

“It is with great sadness that we announce the passing of retired Sergeant Kevin Nishita. On 11/24/21, Kevin was shot while providing security as an armed guard in Oakland. He was rushed to a local hospital for medical attention and succumbed to his injuries this morning,” the Colma Police Department said on social media.

It is with great sadness that we announce the passing of retired Sergeant Kevin Nishita. On 11/24/21, Kevin was shot while providing security as an armed guard in Oakland. He was rushed to a local hospital for medical attention and succumbed to his injuries this morning.pic.twitter.com/ut1jKx4tyi

The San Jose Police Department released a statement on the murder of one of their former officers.

It is with great sadness and broken hearts that we are sharing the news of the passing of former San José Police Officer Kevin Nishita #3740. On November 24, 2021, Kevin was working a security detail for a local news crew in the City of Oakland when he was shot during an attempted robbery. He was taken to a local hospital with a life-threatening injury, he remained in critical condition until today when he succumbed to his injury.
Kevin was employed by the City of San José as a Police Officer from 2001-2012. During his time with us he worked as a Gang Investigations detective as well as working our Gaming/Vice Unit. In addition to his Police assignments, Kevin also spent some time representing his peers as a director with the San José Police Officers Association. In 2012 he joined the Colma Police Department.

“His contagious smile, passion to serve others, and an unmatched work ethic embodied the best of all of us,” Mata continued. “As a patrol officer, gang detective, and as a person, Kevin modeled bravery, kindness, and dedication helping make San José a better place for everyone.”

“We must work together and stay committed to stop senseless violence and the loss of precious life and hold those committing these acts accountable,” he added.

“Our thoughts and prayers are with the Nishita family during this difficult time as we honor Kevin’s memory. Our flags will remain at half-staff until his funeral,” Mata concluded. “Our sincerest condolences to the Nishita family, he leaves behind a wife, children, and grandchildren. He touched many of us and will not be forgotten by those us who still called him friend at the San José Police Department. Godspeed.”

“Words cannot express my heartbreak. Kevin Nishita was a good man who took his job seriously. He kept me and my colleagues safe. He did not deserve this. He and his family will be forever in my prayers,” said KRON reporter Maureen Kelly.

Words cannot express my heartbreak. Kevin Nishita was a good man who took his job seriously. He kept me and my colleagues safe. He did not deserve this. He and his family will be forever in my prayers.https://www.kron4.com/news/bay-area/kron4-security-guard-dies-from-injuries-after-attempted-armed-robbery/u00a0u2026

Today we learned that Kevin Nishita has died after being shot while working as a security guard with one of our reporters on a story in Oakland. Kevin was an unbelievably kind person with a heart of gold. This never should have happened. My thoughts are with his family.pic.twitter.com/AqkaQ5Qd6W

Kevin Nishita. He was our friend. He was an officer and a gentleman in every sense of the word. I literally texted him yesterday telling him if needs anything let me know. This isnu2019t fair. There are killers still out there who ripped him from his family .pic.twitter.com/KtZdbzmY23

Heartbroken today seeing this news. My colleagues who go out into the field spoke so highly of Kevin who helped keep them safe on the daily while doing their jobs. My heart goes out his family.https://twitter.com/kron4news/status/1464628524703043594u00a0u2026

This is Kevin Nishita. nnHe leaves behind a wife, two children and three grandchildren. nnHe worked as an armed guard for Star Protection Agency and is a former Police officer.nnHe died doing his jobu2026 protecting our reporter so she could do hers.nnItu2019s tragic and senseless.pic.twitter.com/M4Xm9NHXFq

Kevin Nishita honorably and bravely protected Bay Area TV reporters for years. I donu2019t pray very often but I prayed for him. nThis morning we are heartbroken. The @ACSOSheriffs escorted his body from the hospital in Oakland with full law enforcement honors.pic.twitter.com/LfSEdWfzJj

Nishita’s murder was the 126th death this year that Oakland police are investigating as a homicide.