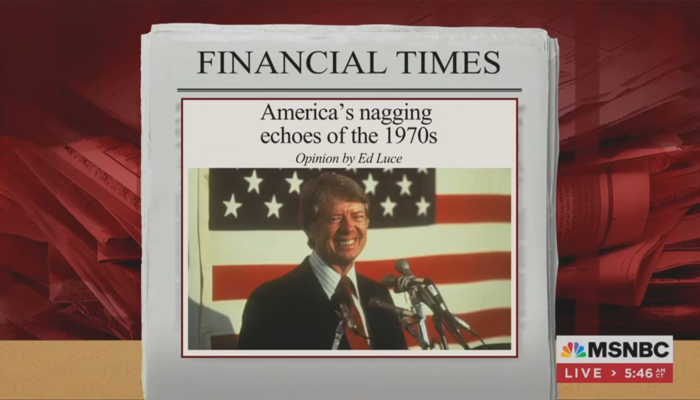 How bad are things for Joe Biden? On top of the latest poll showing him with a minuscule 33% approval rating, here comes a certified member of the liberal media noting the similarities between Biden’s presidency and that of Jimmy Carter.

On Friday’s Morning Joe, Ed Luce was invited to discuss his current Financial Times column, “America’s Nagging Echoes of the 1970s.” Luce saw parallels in terms of inflation, crime on the rise, and threats from Moscow. But the most dread similarity he drew was:

Being a good liberal, Luce naturally tried to take some of the onus off Biden, saying there’s really very little presidents can do to affect inflation and crime. Wrong! Pumping trillions into the economy has inevitably led to overheating. And all the talk in Biden’s party about defunding the police, all that looking the other way when rioters attacked police personnel and facilities, has demoralized some in law enforcement while emboldening criminals.  (This is exactly what they said about Carter, too — “gee, there’s little he can do.”) 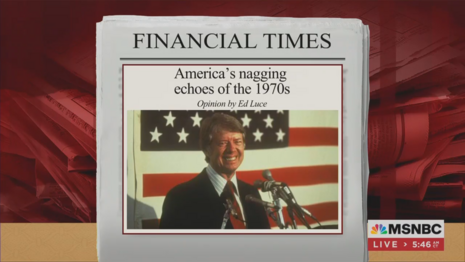 And Luce let it be known that he is still cheering for Biden, casting the prospect of his failure in the most ominous terms:

“The difference [between Carter and Biden] is, of course, Reagan waiting in the wings is not Donald Trump. The consequences of Biden not succeeding are so much more existential.”

Yikes! If Biden fails and Trump returns, America could literally cease to exist! And funny how the left, which loved to hate Reagan, now casts him in benign terms—at least in comparison with Arch-Satan Trump!

Jonathan Lemire then piled on poor Biden. After mentioning Carter’s infamous “malaise” speech, he noted that Biden’s veep had herself recently used that m-word.

That, said Lemire, “set off a lot of alarm bells for a lot of Democrats and political observers: whoah, that’s one of the words you don’t say.” He concluded grimly, “it’s a low moment.”

Note: Carter never actually spoke the word “malaise” in his ill-fated speech. But he did say:

“It is a crisis of confidence. It is a crisis that strikes at the very heart and soul and spirit of our national will. We can see this crisis in the growing doubt about the meaning of our own lives and in the loss of a unity of purpose for our nation.”

Grim stuff! No wonder America embraced the optimistic Ronald Reagan, he of the “shining city on a hill,” and “morning in America.”

On Morning Joe, Ed Luce of the Financial Times drawing parallels between the presidencies of Jimmy Carter and Joe Biden was sponsored in part by GlaxoSmithKline, maker of Parodontax, Subway, and Discover.

MIKA BRZEZINSKI: And Ed, you have a column, “America’s Nagging Echoes of the 1970s,” if we jump to that. Tell us about it.

ED LUCE: Well, it’s the concern, really, with rising inflation, with the homicide numbers we’ve seen this year, ominous rumblings from Moscow, which we had on the border with Poland then, and now with Ukraine. And the sense of drift, the general sense of drift. The sense we have a president that isn’t really master of his destiny. And the broader mood music of inflation and crime, which is stuff that presidents have very little ability to influence, to sway, is, I think, a very uncomfortable parallel with the late ’70s.

The difference is, of course, Reagan waiting in the wings is not Donald Trump. The consequences of Biden not succeeding are so much more existential.

JONATHAN LEMIRE: To Ed Luce’s point about the 1970s, we should note, Jimmy Carter of course got in, made some waves with his famous malaise speech. Vice-president Kamala Harris used that same word in an interview this week, which set off a lot of alarm bells for a lot of Democrats and political observers: whoah, that’s one of the words you don’t say.

The American electorate is sort of restless and unhappy right now. The White House says look, we’ve still got a year, almost, until midterms. We can turn this around. It’s a low moment.

WATCH: Tucker Reacts to Biden’s Divisive Speech in the Way Only He Can
Biden’s Top 5 Worst Affirmative Action Picks
AOC Wants To Ditch Her Tesla, Because Tolerance
DHS secretary warns illegal immigrants: ‘US borders are not open’
COVID-19 lockdowns in Shanghai continue as stores are forced to close and residents in the city’s financial district are ordered to stay home