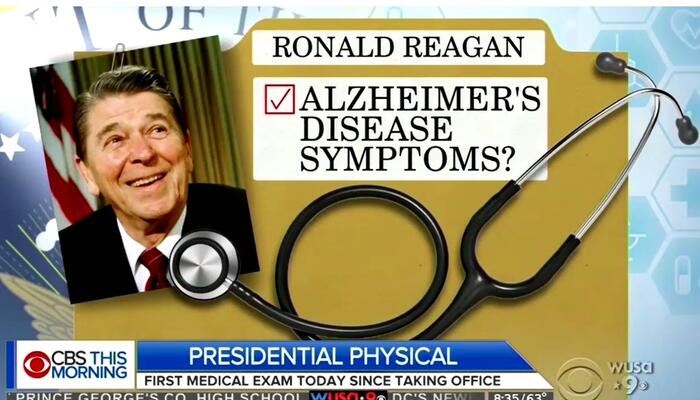 Four years ago this week, CBS managed to question the mental fitness of two Republican presidents, Ronald Reagan and Donald Trump, in one show. Almost four years later, the same network would only gingerly, mildly bring up the topic with Joe Biden.

On the same day’s show, Chief Medical Correspondent Dr. Jon LaPook smeared Ronald Reagan with a debunked conspiracy theory: “And there are questions about whether Ronald Reagan had symptoms of Alzheimer’s while in office.” And this wasn’t the first time. Back on January 17, 2011, CBS’s Erica Hill talked to Michael Reagan and smeared, “Could it be possible there may have been something else? Could he [President Reagan] have had dementia?”

In 2018, LaPook circled back to Trump: “When he stepped into office last year, President Trump was the oldest person ever to become commander-in-chief. Now at 71 years of age, he’s defending his fitness for office.”

Contrast all of this to a recent CBS interview with Joe and Jill Biden. On December 13, 2021, Rita Braver tossed softballs to the President. The only slightly tough question came when she brought up a single question about Biden’s mental fitness. But rather than actually look into the issue, she only wanted to know “What’s your response to that?”

There have been some recent polls that show that quite a few Americans have some questions about the President’s current mental fitness. As somebody who spends – I can see you shaking your head. So what’s your response to that?

For more examples from our FLASHBACK series, which we call the NewsBusters Time Machine, go here.

Axios puts 2A supporters on blast, publishes list of GOP lawmakers who receive the most money from gun groups
Wendy’s co-worker of Texas school shooter says he was open about plans to save up money for weapons
Did Biden just let slip that record-high gas prices were PLANNED?
Georgia Gov. Brian Kemp defeats Trump-backed David Perdue in Peach State gubernatorial primary; Kemp will face off against Democrat Stacey Abrams during the general election
CNN Runs Misleading Pro-Gun Control Fact Check of Abbott