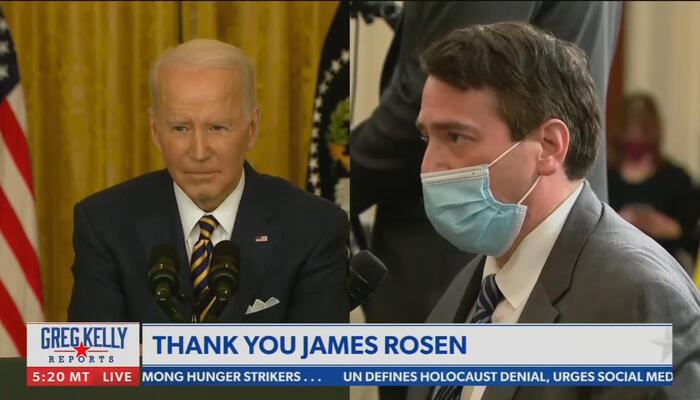 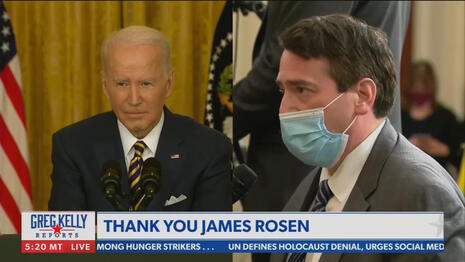 Eeeeek! It’s a journalist! The shrieks of horror from the liberal media as some of its denizens got the vapors over a question from Newsmax White House correspondent James Rosen were hard to miss.

But first, let’s start with something called “hard news.” Otherwise known as fact. This was the headline on a Politico story that caught reporter Rosen’s attention:

The story said this:

Voters have increasing doubts about the health and mental fitness of President Joe Biden, the oldest man ever sworn into the White House, according to a new POLITICO/Morning Consult poll.

Only 40 percent of voters surveyed agreed with the statement that Biden “is in good health,” while 50 percent disagreed. That 10-percentage-point gap — outside the poll’s margin of error — represents a massive 29-point shift since October 2020, when Morning Consult last surveyed the question and found voters believed Biden was in good health by a 19-point margin.

Asked whether Biden is mentally fit, voters are almost evenly split, with 46 percent saying he is and 48 percent disagreeing. But that negative 2-point margin stands in stark contrast to Biden’s numbers last October, when voters believed he was mentally fit by a 21-point margin.

With this factual report of the Politico/Morning Consult poll in hand, Rosen looked the President of the United States in the eye and said this:

ROSEN: Thank you very much for this honor. James Rosen with Newsmax. I’d like to — I’d like to raise a delicate subject but with utmost respect for your life accomplishments and the high office you hold: A poll released, this morning, by Politico/Morning Consult found 49 percent of registered voters disagreeing with the statement, “Joe Biden is mentally fit.”

ROSEN: Not even a majority of Democrats who responded strongly affirmed that statement.

BIDEN: Well, I’ll let you all make the judgment whether they’re correct. Thank you.

ROSEN: Well, so, the question I have for you, sir, before — if you’d let me finish — is: Why do you suppose such large segments of the American electorate have come to harbor such profound concerns about your cognitive fitness? Thank you.

BIDEN: I have no idea.

In other words, Rosen took a factual event — a poll — and asked the President directly about why he thought so many Americans in that poll had “such profound concerns” about his “cognitive fitness.” Biden answered with “I have no idea.” And the press conference went on.

Ahhhh. But after the press conference there was, as Newsmax’s Greg Kelly reported on his evening show, liberal media umbrage at Rosen just for asking his question.

As Kelly noted, when a reporter like – in this case James Rosen – stands up and actually does his job, the “fake reporters get jealous, envious and really, really nasty.” He illustrated with a clip of MSNBC’s Joe Scarborough as Scarborough said “I think the Newsmax guy asked if he (Biden) actually met the aliens. So give him (Biden) credit for going to people who were going to come at him with a crazy question.”

Kelly then pulled up a clip of MSNBC’s Lawrence O’Donnell saying this: “A reporter from Newsmax who, deep into this very long press conference asked a very personal question about Joe Biden – an absolutely disgraceful question.”

Curiously, Scarborough and O’Donnell both have a mysterious case of amnesia when it came to their own questioning if then-President Trump was mentally fit to be president. Here’s a headline from Scarborough, as reported right here on NewsBusters by Alexis Thomasi back in April of 2017, barely four months into Trump’s presidency:

Move forward to November of 2017, and NewsBusters’ Chris Reeves caught Scarborough at it again:

By 2020, MSNBC’s Lawrence O’Donnell was headlined this way:

As NewsBusters’ Michael Dellanno reported, O’Donnell was pushing Mary Trump’s book (in which she makes plain her hatred of her uncle) that portrays the then-president as some sort of evil, souless freak:

The same O’Donnell who was appalled at Rosen’s “absolutely disgraceful question” about Biden.

Unlike Rosen’s question, all of this garbage from Scarborough and O’Donnell was based not on the facts in a poll but rather on the mere Trump-hating political opinions of the two MSNBC hosts.

After showing the Scarborough and O’Donnell clips and others assessing Biden’s press conference as some sort of triumph (!!) Kelly came back with a smile to say:

You see how they rally around their own? It’s fascinating. It’s fascinating. And in some ways we are losing the country. We are, because you know a country has values that are commonly held. You could see, if you’re a reasonable person, that Joe Biden had a catastrophically bad press conference. But that’s not the way these guys see it. They see it the opposite. It’s very strange.

What was certainly evident in the press conference was that James Rosen was doing his job as a journalist. He didn’t make stuff up or concoct an imaginary story or ignore the elephant in the room. He used a poll – a factual event – to ask his question.

This is real journalism, something that was rarely to be seen in the Trump years as CNN and others spun, for example, the fantasy tale of Trump-Russia collusion. There was not a shred of journalism involved in that episode – and the liberal media not only didn’t care, they aided and abetted the war on Trump simply out of personal and political animus.

What Americans saw close up in that exchange between Rosen and Biden, followed later by the reaction from the likes of Scarborough and O’Donnell, is the personification of what happens when real journalism is committed in the midst of fake news.

Fox’s Sean Hannity, in the wake of the Jussie Smollett case, said this:

The Smollett case represents another example of what I’ve been saying since 2007 and 2008: Journalism in this country is dead. In case after case after case, the mainstream media devours any story that fits their radical, extreme, agenda.

So too was this the case with young Nicholas Sandmann and Kyle Rittenhouse. There was no effort to commit real journalism and get to the bottom of what actually happened in all three cases. Eventually, that backfired on the media – big time. And in Sandmann’s case, with a considerable financial payout from media organizations that threw real journalism under the bus to indulge in their favorite liberal narrative of the moment.

There is abroad in the journalism community an insistence on pushing X narrative – and any journalist who violates that narrative is to be condemned.

The mainstream media narrative of Joe Biden is that he is just fine, thank you. Nothing to see here. Then into a presidential press conference walks James Rosen to ask an obvious question based on a fact – the fact of that Politico/Morning Consult poll that had real hard polling data on the subject. One can take issue, certainly, with that poll or any other. But the fact of its existence and what it says cannot be denied.

To go after a real journalist doing his job for all to see says everything about Rosen’s critics – and those who attacked him for doing his job.