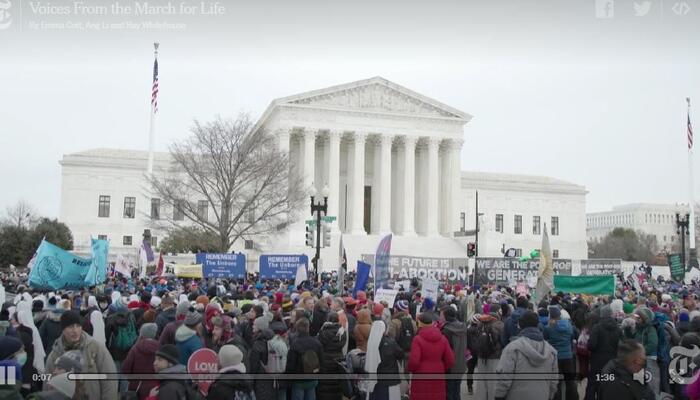 The New York Times covered the 2022 annual pro-life March for Life rally in Saturday’s edition: “March for Life Rally Unfolds with Eye on Supreme Court” reported by Kate Zernike (back with a byline after a long absence) and Madeleine Ngo.

The March for Life, which takes place every year in late January, around the anniversary of the Supreme Court decision Roe v. Wade that legalized abortion, reliably draws tens of thousands of pro-lifers, many of them young people, out into the winter cold.

The story…isn’t good, though better than the non-coverage or petulant coverage of previous years. In 2013, after a five-year absence of print stories, the paper covered the march, only to pair a middling story with one chiding pro-life marchers for not also being anti-gun.

The crowd, bundled in thick coats and scarves in the freezing temperatures and largely unmasked, began gathering a few hours before the rally began at noon.

The “unmasked” are only a problem for the Times when crowds gather to mark things the paper doesn’t approve of, like Trump Rose Garden ceremonies and college football games. Black Lives Matter protests/riots and NBA championship celebrations don’t draw similar concerns.

The reporters also allowed a tacky opposition stunt to take up valuable story space, as if the paper was obliged to neutralize the pro-life side within the report. That’s not how the paper treats left-wing protests — reverently, with dissent either ignored or condemned.

The Times ran a brief, respectful video and three images within the online version of the article – two crowd shots and an image of an offensive tweet from Catholics for Choice, showing a disrespectful stunt by a projectionist.

On Thursday evening, the abortion rights group Catholics for Choice beamed messages in light on the side of the Basilica of the National Shrine of the Immaculate Conception in Northeast Washington, the largest Catholic church in North America, as anti-abortion marchers convened inside for an all-night vigil. The messages on the tower of the basilica noted that one in four women who get abortions are Catholic and that 68 percent of Catholics in a Pew poll support the Roe decision. “Pro-choice Catholics, you are not alone,” read one.

…. Studies suggest that a reversal of the decision would mostly affect poor women, women of color, and those who are already mothers.

The following is not an “argument,” but a factually accurate statement of the legal facts.

Ms. Mancini, the president of the March for Life, accused abortion rights groups of fear-mongering about the risks if Roe falls. In interviews before the march she argued that overturning the decision would simply return the question of abortion rights to states, to decide according to the wishes of their citizens.

Meanwhile, the pro-choice side got away with emotional appeals:

Abortion rights supporters argued that the consequences of overturning Roe would be severe and long lasting for women and children.

The story did end respectfully:

Gazing at the crowd around him, Mr. Winne said he was hopeful that younger people would continue to fight to end abortion. “We’re clearly on the older end,” Mr. Winne said. “That’s an encouragement that this isn’t just something that we, as people in their 60s, are concerned about.”

USS Harry S Truman Will Be Under NATO Control During May Exercises in Europe
Mitch McConnell and other congressional Republicans visit Zelenskyy in Kyiv as $40 billion aid package stalls in the Senate
Group of 150 Illegal Aliens Swim Across Rio Grande Into Eagle Pass, Texas (VIDEO)
Video: Priest ditches wedding in his car to mow down thief who robbed church
AP Laments GOP POUNCING on Biden Over Baby Formula Shortages