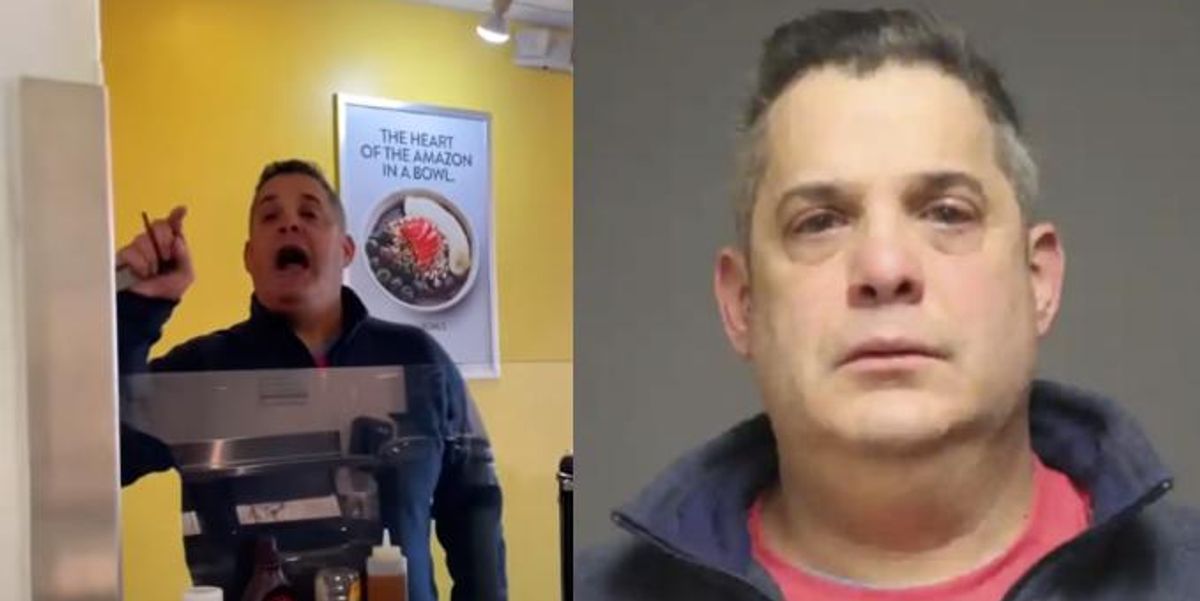 A Connecticut man is accused of going on a xenophobic tirade at a smoothie shop. The wealth manager was arrested for throwing a drink at one of the employees at the smoothie shop in Fairfield, according to police.

James Iannazzo, 48, of Fairfield, reportedly went to the Robeks smoothie store in Fairfield on Friday afternoon. Approximately 30 minutes after leaving the food establishment, he called 911 to request emergency medical services for his son, who was suffering from an allergic reaction. The child was transported to a local hospital, according to authorities.

Iannazzo returned to the Robeks location roughly an hour after his original visit that afternoon. A visibly agitated Iannazzo is seen on video verbally abusing the four teen workers at Robeks. Iannazzo demands to know who made his smoothie from over an hour ago, but the employees are not sure who made that specific smoothie.

After being instructed to leave by one of the employees, the man growls, “I want to speak to the f***ing manager.”

An employee advises the disgruntled man to contact the corporate office to file a complaint, to which Iannazzo says, “Get the f*** out of here, you f***ing b****!”

While the teen girls turn their heads away from Iannazzo, he hurls a drink at the employees, hitting one girl in the shoulder.

Iannazzo unleashes a string of profanities against the girl he hit with the drink.

The irate man asks for a phone number for the corporate office, but the employee repeatedly tells him to leave the establishment.

The man attempts to then access the “employees only” area, but one of the girls is pushing back and he can’t open the door.

According to Heavy, TikTok user @cjjbreezy uploaded the original video with a caption: “There was one girl, she was 16. Literally, it was like her second day. She was in the back, already called the police.”

I’ve identified this man as James Iannazzo of @MerrillLynch being racist and assaulting a minorpic.twitter.com/O8Ic6jyh3p

Iannazzo left the scene before police arrived, but later turned himself in to authorities without incident.

Iannazzo was arrested and charged with second-degree intimidation based on bigotry or bias, second-degree breach of peace, and first-degree criminal trespass.

“Iannazzo told Officers that he was upset about his son having a severe allergic reaction and he went back to the store as a result,” according to the Fairfield Police Department.

“During the investigation, employees reported that Iannazzo never told them about the peanut allergy but had only requested that there be no peanut butter in his drink,” cops said.

Iannazzo was issued a court appearance date of Feb. 7, 2022.

According to his LinkedIn profile, Iannazzo had been a wealth management advisor and managing director. He had been affiliated with Merrill Lynch Wealth Management since November 1995.

Merrill Lynch issued a statement regarding the incident, according to WVIT.

“Our company does not tolerate behavior of this kind. We immediately investigated and have taken action. This individual is no longer employed at our firm,” the company said in a statement.