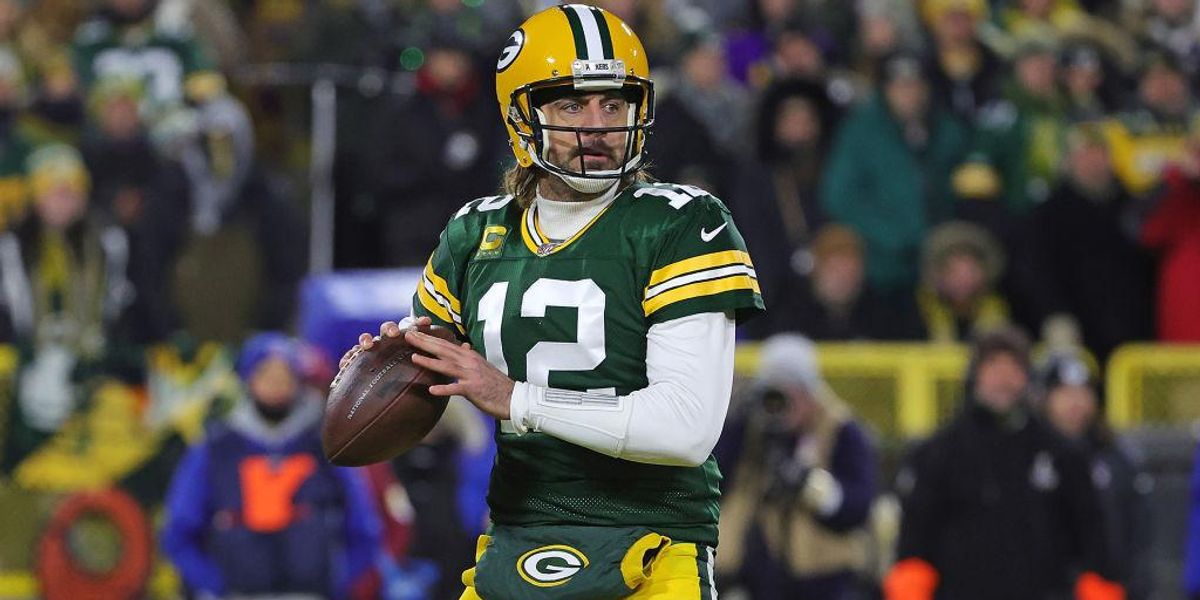 Buried beneath a meandering avalanche of words, ESPN reluctantly platformed and profiled the NFL’s best player giving voice to the voiceless and speaking his truth to power.

The “worldwide leader in sports” prioritized rehashing well-known and well-worn Aaron Rodgers stories rather than highlighting the likely MVP’s excoriation of our 46th president. The story opened with a retelling of Rodgers mentioning Ayn Rand’s book, “Atlas Shrugged,” during a “Monday Night Football” interview with Peyton and Eli Manning. In no particular order, the profile then pivoted to reminding sports fans that Rodgers told Bears fans he owns them, used the word “immunized” when discussing his vaccination status, and failed to land a big-time scholarship offer coming out of high school.

When not replaying the oldies, the ESPN story allotted 556 words to Rodgers’ junior college coach, Craig Rigsbee, sharing an anecdote about his unvaccinated best friend dying of a COVID-related heart attack. It was a mildly interesting story that told us nothing about Rodgers. Around the 4,000-word mark, the author began his long descent into explaining the harrowing story of a blue-check female journalist, Molly Knight, who received nasty tweets because she mocked Rodgers’ faux bout with “COVID toe.” Rodgers criticized Knight publicly after she cracked over Twitter that Rodgers deserved the injury because he took medical advice from podcaster Joe Rogan.

The Twitter storm caused Knight to move in with her mother for five days due to fear and anxiety related to the mean tweets. The story argued that Rodgers’ response to Knight’s criticism was “the perfect example of one of the most popular plays that men run on the internet: If facing a sea of criticism, find one woman among your critics, singler her out, then let your followers take it from there.”

Aaron Rodgers is a despicable, sexist pig. That was the preamble before ESPN finally quoted the unvaccinated quarterback trashing Joe Biden.

“When the president of the United States says, ‘This is a pandemic of the unvaccinated,’ it’s because him and his constituents, which, I don’t know how there are any if you watch any of his attempts at public speaking, but I guess he got 81 million votes,” Rodgers said during a 28-minute phone interview with the ESPN reporter. “But when you say stuff like that, and then you have the CDC, which, how do you even trust them, but then they come out and talk about 75% of the COVID deaths have at least four comorbidities. And you still have this fake White House set saying that this is the pandemic of the unvaccinated, that’s not helping the conversation.”

That quote is the most interesting, provocative, and courageous comment made by a high-profile athlete since Muhammad Ali refused induction into the military during the Vietnam War. Professional athletes and other influencers avoid assessing the authoritarian tactics that support Biden and the Democratic Party’s power-grab. They pretend Biden is as glib as JFK and as popular as Ronald Reagan.

ESPN muted Rodgers’ powerful words. The first time I read the story, I gave up 5,000 words in. When I searched Rodgers’ name via Twitter, I discovered tweets reacting to his Biden remarks. The comments place an enormous bull’s-eye on Rodgers this evening when he faces the San Francisco 49ers in a divisional playoff game.

Rodgers is Talented Tim Tebow. Whether he likes it or not, Rodgers is a hero to Trump supporters, the unvaccinated, evangelicals, his peers across the NFL. He questioned the sanity of vaccine policies, the integrity of the 2020 election, and Joe Biden’s fitness for office. He channeled his inner Tucker Carlson.

Rodgers is a threat to the Asch conformity being imposed by social and corporate media. Asch conformity is an experiment that argues people will go along with a lie as long as everyone else does. Once one person breaks from the lie, others follow suit and acknowledge the truth right before their eyes. Everyone can see that Biden’s vaccine mandate doesn’t work and is an affront to traditional American freedom. Same as everyone can see that Joe Biden is the least inspiring and popular president since Richard Nixon.

Asch conformity has branded anyone who is skeptical of the efficacy of the experimental vaccines and the 2020 election results as a bigot and threat to society.

Is Rodgers a bigot? An insurrectionist?

Rodgers’ critique of Biden should be the lead story on ESPN.com and ESPN television. If LeBron James calls former President Trump a “bum,” it will be a major story across ESPN’s platforms. But LeBron is far more thoughtful, articulate, and powerful than Rodgers.

LeBron backs the establishment. Rodgers challenges it. Rodgers’ refusal to get vaccinated forced the NFL to quit testing unvaccinated players. The league wants to avoid the possible embarrassment of benching its best player during the playoffs.

Now we just need Rodgers to win the Super Bowl and decline Biden’s invitation to visit the White House. ESPN will be forced to dig up another woman to smear Rodgers.