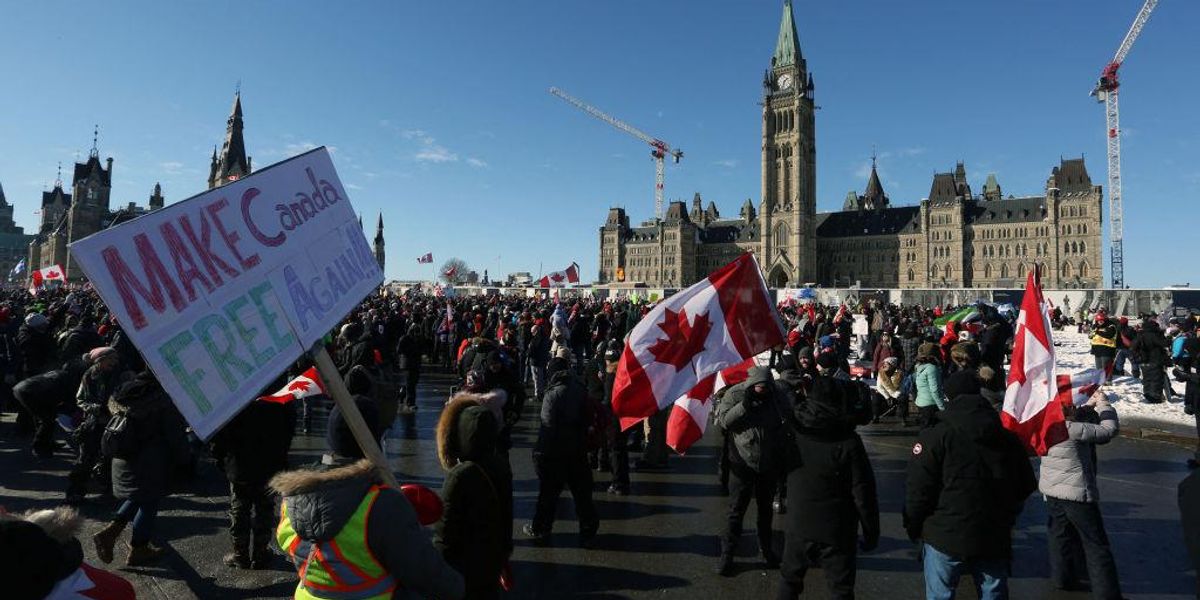 Truckers and protesters showed up in huge numbers as the Freedom Convoy descended upon Ottawa, Ontario. Despite subzero windchill temperatures on Saturday, Canadians mounted a large protest against vaccine mandates. Massive crowds peacefully protested against government overreach near Parliament Hill.

Truckers were protesting an order that went into effect on Jan. 15, requiring unvaccinated Canadian truckers re-entering the country from the U.S. to get tested for COVID-19 and quarantine themselves. There was reportedly a convoy of up to 50,000 Canadian truck drivers who traveled to Canada’s capital to protest the vaccine mandates.

The CBC reported that Trudeau left Rideau Cottage early Saturday for security reasons, and was transported to a secret location with his family.

Last week, Trudeau called the trucker convoy a “small fringe minority of people” who are “holding unacceptable views that they are expressing do not represent the views of Canadians who have been there for each other.”

There were thousands of protesters, many waving Canadian flags and some were holding signs expressing contempt toward Trudeau.

Incredible scenes in Ottawa, where tens of thousands have gathered to protest for an end to COVID lies and mandates.pic.twitter.com/ioH2TM5Y4o

This is the scene in Ottawa as the Trucker Freedom Convoy makes their arrival.nnJustin Trudeau has left Canadau2019s capital city.nnSo much for u201csmall fringe minorityu201d.pic.twitter.com/uHe5KRBEaX

The scene in Ottawa. I get the impression people here donu2019t like Trudeau. nn#freedomconvoy22pic.twitter.com/1Re5RYkMRD

There were reportedly volunteers handing out food and coffee to the protesters as well as people giving truckers gift cards.

A u201csmall fringe minorityu201d of Canadians with u201cunacceptable viewsu201d in Vankleek Hill, Ont. prepared supplies and food for truckers u2013 including amenities for dogs who are part of the convoy. #TruckersforFreedom #cdnpolipic.twitter.com/VhvhjbDxgp

Coffees, pocket warmers, Tim Hortons gift cards, and homemade goods brought from all across Canada are among the things being disturbed to the truckers.nnThe truckers say they are here to stay and not leaving until segregation is abolished. nnCheck out http://ConvoyReports.comu00a0pic.twitter.com/i8P6YtCvmY

Local authorities were forced to ask for backup from nearby communities as the crowds swelling in Ottawa. Gridlock from the rally caused Ottawa’s downtown core to come to a complete standstill, and police said there was no more room for vehicles.

One trucker explained that it isn’t about the vaccine, it’s about “choice,” “freedom,” and “liberty.”

This man is a trucker and a Canadian #FreedomConvoy2022 #CHOICE #CanadaTruckers #stopvaccinemandatespic.twitter.com/GDB8em2ujs

I was invited by the truckers to give a short speech. Hereu2019s what I said:pic.twitter.com/ZYclZwDBtH

The protest continued into the night with fireworks and a party-like atmosphere.

Ottawa’s protest has turned into a full-on rave out in front of parliament tonight.nnI will remind you, it’s -20u00b0C (-4u00b0F)nnAnd in the middle of the night, the party just keeps going u2014 trucks included.nnhttp://ConvoyReports.comu00a0pic.twitter.com/q6EQfLzwRi

Some truckers said they plan on continuing their protest against the vaccine mandates, and will sleep in the cabs of their trucks.

In a letter to the truckers, Saskatchewan Premier Scott Moe pledged to end proof of vaccination policies in the province.

“My government supports your call to end the cross border ban on unvaccinated truckers,” Moe said in the statement released on Saturday. “And it is why, in the not too-distant future, our government will be ending our proof of negative test/proof of vaccination policy in Saskatchewan.”

During a rally in Texas on Saturday night, former President Donald Trump delivered an endorsement of the Canadian truckers.

“We want those great Canadian truckers to know that we are with them all the way,” Trump said. “They are doing more to defend American freedom than our leaders by far.”