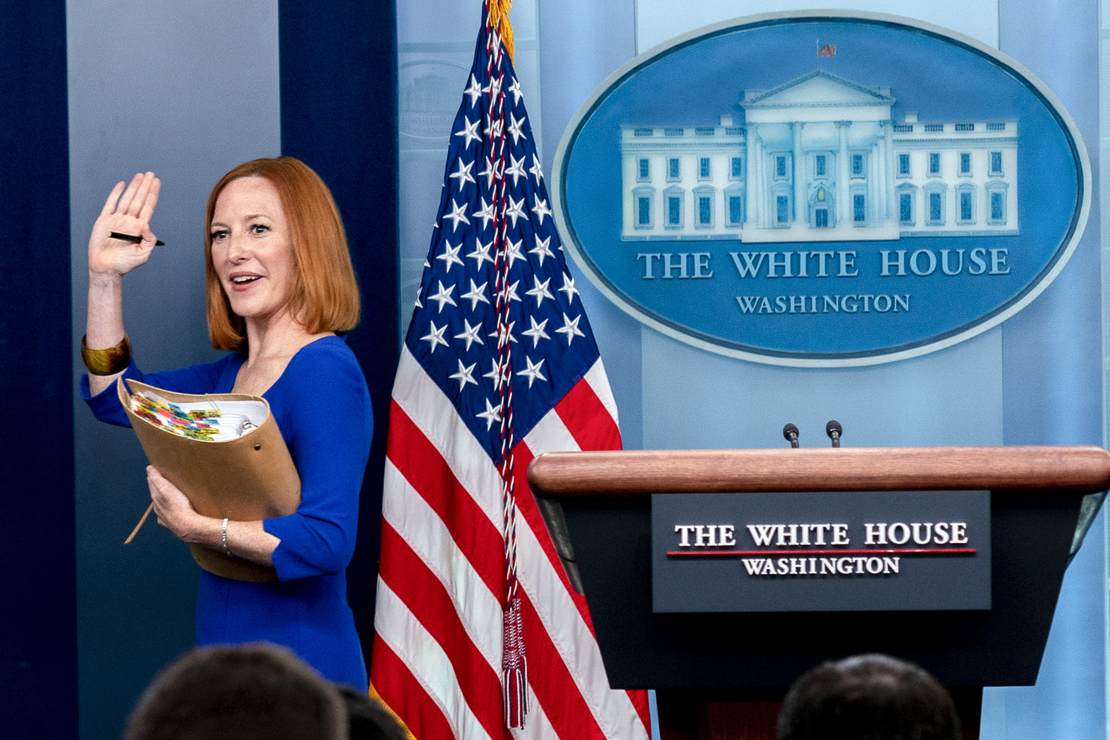 I’ve never held back on my distaste for the now-former White House Press Secretary Jen Psaki. From the very beginning, it was clear that she was going to be awful. Unless you consider lying so easily and without shame to be a good quality.

From the very beginning, it was clear the media was gonna look at Psaki through rose-colored glasses. They gushed over her promise to bring “transparency and truth back to the briefing room” and her insistence that “There will be moments when we disagree … but we have a common goal, which is sharing accurate information with the American people.”

And she’s been lying through her teeth ever since.

But that didn’t stop Tom Jones, senior media writer for the left-wing Poynter Institute, from crowning Psaki one of the “best press secretaries ever.”

“Psaki has restored honor, dignity and class to the White House briefing room after four years of Donald Trump press secretaries, who seemed more interested in picking fights and criticizing the media than effectively communicating that administration’s policies and agenda,” Jones claimed.

He went on to say that Psaki was “consistently prepared, effective in communicating for the president and, even when sparring with media members, always respectful.”

That’s hilarious. Jones must have forgotten about how Psaki got her nickname “Circle Back Girl” because of her tendency to avoid answering questions she couldn’t answer by promising to “circle back” to an issue. Psaki’s entire tenure as the chief mouthpiece of the administration was a neverending habit of dodging questions, deflecting blame, and lying during press briefings. One of her most notable lies was that there were no Americans stranded in Afghanistan during the botched withdrawal.

PSAKI: “I think it’s irresponsible to say Americans are stranded. They are not.”

DOOCY: “‘There are no Americans stranded’ is the White House’s official position on what’s happening in Afghanistan right now?” pic.twitter.com/0FEq5VkO6V

Not only was that a terrible lie, but the number of Americans that the Biden administration admitted were left behind in Afghanistan also kept going up, not down.

If Psaki was so great at her job, why is it that several sources told the Daily Beast that the White House communications team wanted to know what questions the White House press corps planned to ask in advance? That doesn’t exactly reflect competence now, does it?

And I won’t even mention that time Psaki appeared to not know what HUD stood for. Oops.

Perhaps the most notable black mark on her record was her antipathy for questions that weren’t softballs. Despite Psaki knowing that she could expect tough questions from at least one reporter, Fox News White House correspondent Peter Doocy, she never seemed to be able to walk away from one of their exchanges without being humiliated.

But hey, if you can’t trust a writer from PolitiFact’s parent company, who can you trust, right?

CNN’s Brian Stelter cited the Poynter Institue piece in his Reliable Sources newsletter and seemed to suggest that Psaki’s worth came from the sheer number of press briefings she held—more than Trump’s press secretaries combined. Though he seemed to admit that the reason she held so many briefings was that Joe Biden didn’t. “WH reporters appreciated her accessibility, though it didn’t make up for Biden’s relative lack of press conferences and interviews.”

Stelter seemingly said the quiet part out loud about Psaki—that she was so readily available to the media to obfuscate the fact that Joe Biden wasn’t. I can’t quite explain why this is considered a good thing.

Psaki acknowledged last year that Biden’s lack of speaking to the media was by design. “That is not something we recommend. In fact, a lot of times we say ‘don’t take questions’… But he’s going to do what he wants to do because he’s the president of the United States.”

Call me crazy, but I think the love affair with Jen Psaki will be relatively short-lived. Sure, the media was always going to fawn over the first White House press secretary to serve after Trump left office, but now that Black Lesbian Woman™ Karine Jean-Pierre is taking over, I suspect she’ll be quickly elevated as the best ever.

‘There will be blood’: Elon Musk declares he’s assembling ‘litigation department’ of ‘hardcore streetfighters’
Joe Biden says ‘everybody should be concerned’ about the recent spread of monkeypox that is leaving experts clueless
‘Baghdad Bob’: WH chief of staff served humble pie after trying to spin poll called ‘devastating indictment’ of Biden
Atlanta pastor’s husband finds her stabbed to death and lit on fire. Police arrested a felon she had been mentoring.
Group of DOJ employees calls for federal employees to be offered administrative leave to travel for abortions