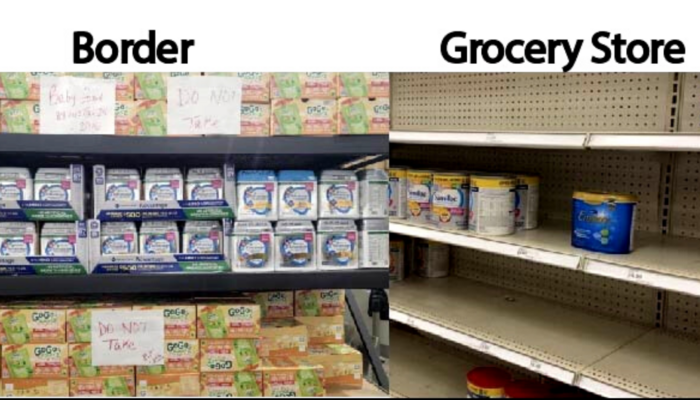 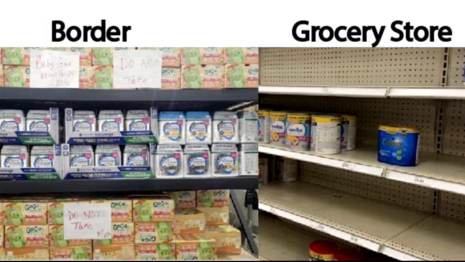 Conservative media outlets published a shocking story about the baby formula shortage on Thursday. A border patrol whistleblower passed along information to Congresswoman Kat Cammack (R-Fla.) that while many store shelves are empty of baby formula, pallets of the product are being sent to border processing facilities. Fox News reported on this as well as this article in the New York Post.

As Republicans picked up on this disparity, the “fact checkers” jumped in to proclaim this was missing context: the federal government was legally obligated to help illegal immigrants.

Washington Post where “fact-checker” Glenn Kessler rushed to shoot the story down on Thursday in “The faux outrage that Biden is stockpiling baby formula for undocumented immigrants.”

Cammack said she was not blaming the babies — “it is not the children’s fault at all” — but she and Abbott blasted the Biden administration for allowing this happen.

The problem is that the Biden administration is following the law — a law that President Donald Trump also followed (though he wasn’t happy about it).

At issue is something called the Flores consent decree, which began as a class-action lawsuit regarding the treatment of migrant children. The Justice Department negotiated a settlement in 1997 during President Bill Clinton’s administration.

The Flores settlement requires the federal government to release rather than detain undocumented immigrant children, first to their parents if possible, to other adult relatives if not, and to licensed programs willing to accept custody if no relatives are available. A 2015 judicial ruling then said the Flores settlement covered all children in immigration officials’ custody, regardless of whether they were apprehended crossing the border alone or with family.

Even if the government is legally obligated to offer formula to illegal-immigrant babies, does that make it “faux outrage”? Is it wrong for average citizens to feel the illegal immigrants are prioritized? Speaking of outrage, get a load of his conclusion:

This is a ridiculous faux outrage. The shortage of baby formula is a serious issue that the administration is seeking to address. But at the same time, the administration cannot be faulted for following the law and providing baby formula to undocumented immigrants. Anyone who suggests this is the result of specific Biden policies, i.e., his “reckless, out-of-touch priorities,” earns Four Pinocchios.

Weirdest of all is Kessler assigning FOUR Pinocchios to the whistleblower revelation as if there is absolutely zero truth to the story despite the fact that border processing centers are stockpiled with baby formula in stark contrast to empty store shelves around the nation.

PolitiFact threw a “Mostly False” at Gov. Greg Abbott (R-Texas) on the same facts: “The baby formula shortage continues to cause stress for many American families, but it does not release the government from its legal responsibility to provide adequate care and nutrition to the children in its custody.”

Fox News’s Kurtz Slams Media’s Anti-Abortion Coverage
Column: Careening Away from Karine Jean-Pierre
DEPOPULATION TARGETS TAIWAN: Birth rates over the past year have dropped 23% in Taiwan, following blind obedience to covid vaccines
The Biden Factor: Saudi Arabia Is in Discussions to Join the BRICS Coalition with China and Russia and Move Away from US with Potentially Explosive Consequences
Twitter Censors Gateway Pundit Article on Jeff Bezos’ Condemnation of Biden and His Understanding of Basic Economics