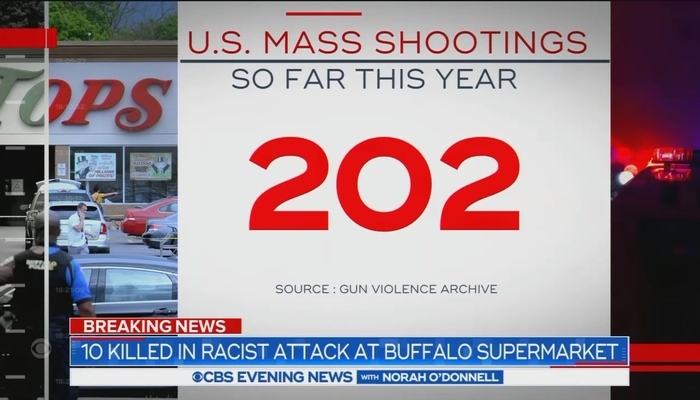 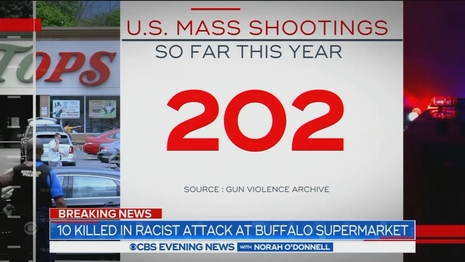 On Monday’s CBS Evening News, anchor Norah O’Donnell began and ended her broadcast by lying and pushing her leftist gun control agenda in the aftermath of the horrific mass shooting at a Buffalo grocery store on Saturday.

“Tonight, this is a community in mourning — ten people were killed, three injured, eleven of them were black,” O’Donnell announced at the top of her program, before repeating an outright lie that has been previously debunked by NewsBusters: “it was a deadly weekend here in America — the United States has seen 202 mass shootings so far this year, four of them happened on Sunday.”

In reality, there haven’t been 202 mass shootings in America this year. As NewsBusters Deputy Managing Editor Nick Fondacaro wrote in April at the link above:

When reports of a “mass shooting” break, the common understanding is that a person went to a public place (school, shopping center, est.) and started shooting indiscriminately with the intent to kill as many as possible. But what the liberal media are currently citing is data from the Gun Violence Archive, a supposed “independent” aggregator of incidents involving guns.

Yet, the Gun Violence Archive where CBS pulled their 202 mass shootings from, defines a mass shooting as “four or more shot and/or killed in a single event incident, at the same general time and location not including the shooter.”

After repeating that easily debunked lie in order to scare viewers into giving up their Second Amendment rights, O’Donnell attempted to pull on viewers heartstrings by invoking the memory of one of the women who died in Saturday’s tragedy.

“We want to end tonight with what has become an all-too-familiar scene in America, a community rocked by senseless violence,” O’Donnell said before telling viewers the story of 72-year-old Katherine Massey who wrote a letter to the editor in her local paper “calling on the federal government to address gun violence in this country.”

Attempting to guilt her audience into supporting gun control, O’Donnell ended the show by adding “on Saturday, she became a victim herself, one of the ten people killed and three injured.”

CBS Evening News lying about the number of mass shootings, and exploiting the death of an elderly woman to push a radical gun control agenda was made possible by Liberty Mutual. Their information is linked.

O’DONNELL: Tonight, this is a community in mourning — ten people were killed, three injured, eleven of them were black. Those who were killed ranged in age from thirty two to eighty six and included a retired police officer, a substitute teacher and a grandmother of six. Tomorrow, President Biden will come to Buffalo to grieve with this community. And it was a deadly weekend here in America — the United States has seen 202 mass shootings so far this year, four of them happened on Sunday.

O’DONNELL: We want to end tonight with what has become an all-too-familiar scene in America, a community rocked by senseless violence. What started as a typical Saturday for Buffalo turned into a nightmare — shoppers trying to get their bread, their milk, strawberries for a favorite shortcake dessert, their lives shattered by someone with hate in his heart. But as one resident in this community said, we can’t match his hate, love must prevail.

There’s one story we’ve heard that is chilling–72-year-old Katherine Massey wrote a letter that appeared in the local paper here almost exactly a year ago, calling on the federal government to address gun violence in this country. On Saturday, she became a victim herself, one of the ten people killed and three injured. A local bishop had some poignant words here. He said, we pray for guidance, pray for peace, pray for unity, but most of all, God. We pray that justice be done.

CNN’s Cupp: GOP’s ‘Regressive Bulls***’ Will Destroy the Party
Joe Manchin signals that he’s going to spoil Biden’s plan for a gas tax holiday
USA Today’s Page: Court ‘Another Partisan Player’ After Abortion Case
FDA now BANNING JUUL e-cigarettes, while R.J. Reynolds Tobacco still sells their own versions of the same, because the FDA and AMA have always supported CAMEL CIGARETTES
We are LIVE from the SUPREME COURT: On the watch for Dobbs v. Jackson Women’s Health