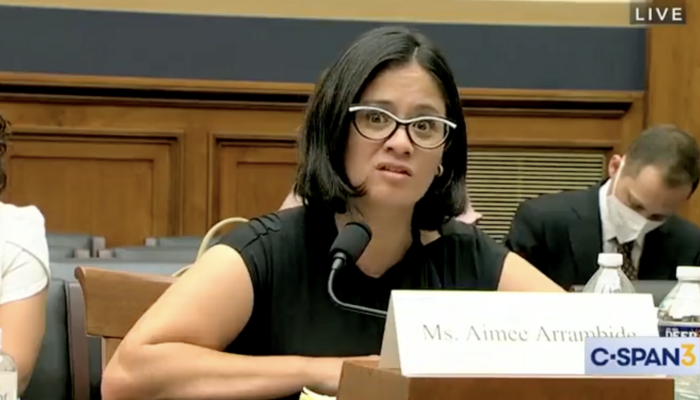 Note to self: If you’re testifying in front of Congress, make sure you know what you’re talking about — or at least know how to act like it.

During a House Judiciary Committee hearing on “Access to Abortion Services” on Wednesday, Rep. Mike Johnson (R-La.) asked testifier Aimee Arrambide what the difference was between killing a two year old child and a child “eight inches up the birth canal.” The testifier was dumbfounded.

“Abortion should be allowed then, by your definition, for any reason, for any purpose, at any stage right?” Johnson asked.

“I trust people to make decisions about their body, and then when relevant, I think that they need to consult their medical practitioners and not Congress,” Arrambide responded.

Then Johnson really stumped Arrambide and left her only able to answer with a pre-rehearsed phrase.

He painted the picture plain and simple:

If it is not lawful and morally acceptable to take the life of a ten-year-old child … and a two-year-old child, same thing, that would be murder, we would all agree that’s wrong, then what is the principal distinction between the human being that is two years old, or nine months old, or one week old, or an hour old, than one that is eight inches further up the birth canal in the uterus? What’s the difference? Why is it OK in the latter cases and not the former cases?

Arrambide then sat in silence for a solid five seconds. We could clearly see her mind scrambling for the answer. I think I even saw her swallow her saliva to stall some more. She probably knew full well that there was no difference in the two cases and that both were murder, but she still froze. Admitting the truth would squash her testimony and presence on the hill entirely.

All she could articulate was “I trust people to determine what to do with their own bodies. Full Stop.”

Johnson let out a simple “wow,” which summed up what we were all thinking.

Go watch the clip above. I promise you’ll laugh.

Rep. @jdanbishop: “Do you believe men can become pregnant and have abortions?”

Arrambide, like most of the left, couldn’t think critically. All she could do was repeat the same, rehearsed talking points. There was zero thought in her reply. Just regurgitation.