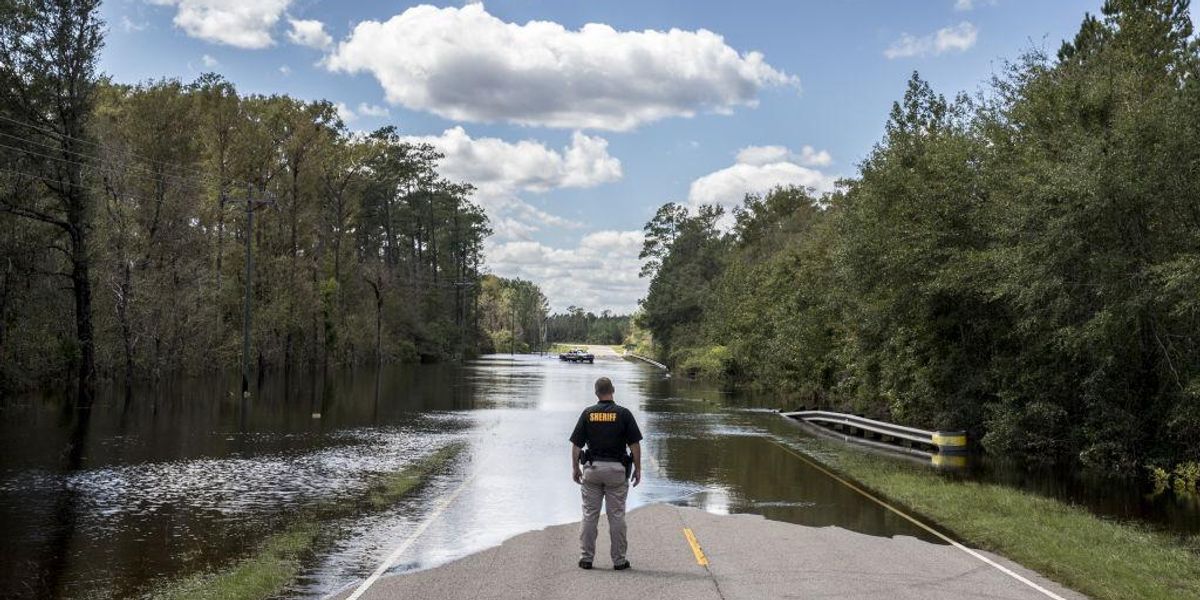 A judge in South Carolina has sentenced a former sheriff’s deputy to 18 years in prison after two mental health patients drowned in Hurricane Florence floodwaters while trapped in the back of his police van.

The former deputy, ironically named Stephen Flood, was charged with two counts of involuntary manslaughter and two counts of reckless homicide for his actions on Sept. 18, 2018, which the judge determined caused the deaths of Wendy Newton, 45, and Nicolette Green, 43.

Circuit Court Judge William Seales handed Flood 18 years of imprisonment for his crimes, five years each for the involuntary manslaughter charges and four years on each of the reckless homicide charges, WBTW-TV reported.

In a statement following the sentencing, Green’s sister, Donnela Green-Johnson, said, “He swore to serve and protect. Instead, he abused the trust that my sister Nicki, Wendy, and the state of South Carolina entrusted with him. And for what? To save some time? He decimated our family with his reckless behavior and took two people from this earth.”

Flood had been transporting the two women from their homes to mental health facilities when he decided to drive two miles on a stretch of U.S. Highway 76 that had been engulfed by floodwaters. Rushing water from the hurricane swept his police van off its wheels and pinned it against a guardrail, preventing the women from exiting through the side door, the Associated Press reported.

In court testimony, it was revealed that Flood and another deputy accompanying him did not have a key to a second door and, due to construction flaws in the vehicle, there was no escape hatch. The two deputies allegedly waited with the women for an hour, trying to keep them calm, but eventually, the floodwaters rose too high and a rescue could not be performed. The two women drowned.

Judges had ordered Newton and Green to be involuntarily committed on the day they died, but neither were considered violent and their transport to mental health facilities was not an emergency. Flood’s lawyers argued that he was sent to transport them nevertheless.

The defense also agreed that the deaths of the two women were unspeakably tragic. But they argued their client was being unfairly blamed without thought given to the van’s faulty equipment, the National Guardsmen who allowed Flood to go around a barricade on Highway 76, and Flood’s supervisors who OK’d his route.

“I ask that you resist the urge to try to give justice to those two ladies by giving injustice to this good man,” defense attorney Jarrett Bouchette reportedly said. “They want to make him a scapegoat for this accident.”

Flood and the other deputy present that day, Joshua Bishop, allegedly tried to shoot the locks off the vehicle to free the women, but to no avail.

Flood did not testify at the trial. But in a closing statement, he insisted that he never intended to harm the women and added, “It was a series of mistakes on my part and other people that led me to that point, and I’m sorry for what happened to the girls.”

Bishop will be tried separately on two counts of involuntary manslaughter at a later date.