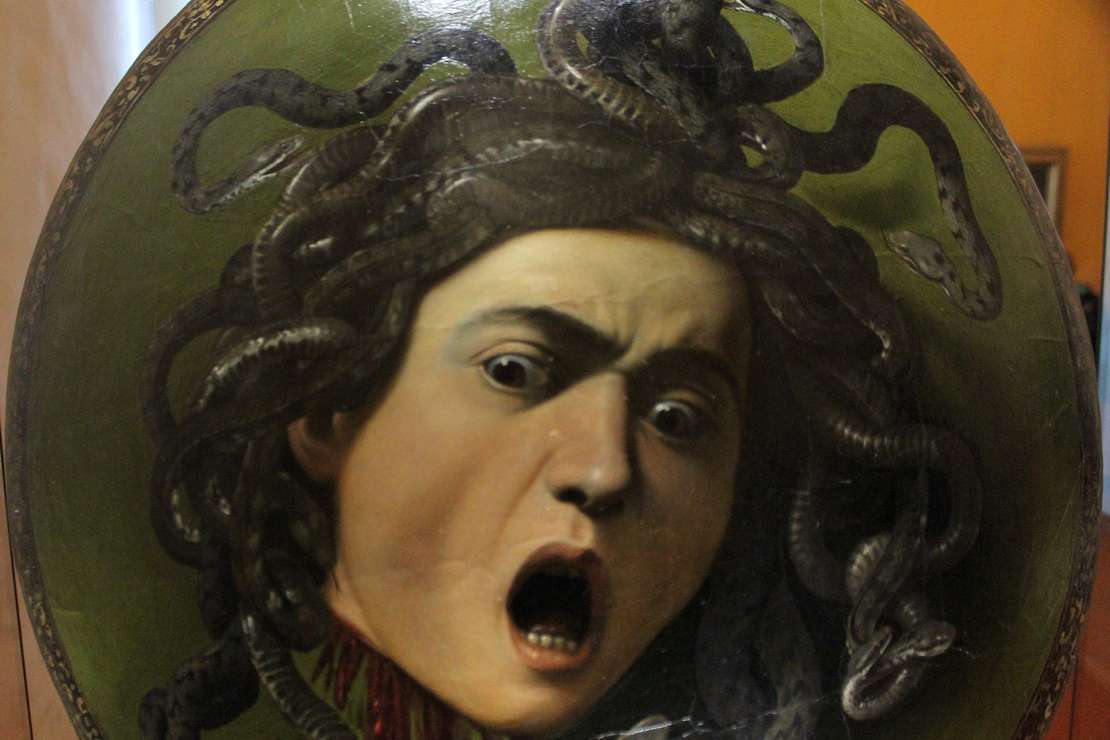 “Don’t look at her, Johnny! She may turn you to stone! ” That was the thought I had, watching Johnny Depp studiously avoid raising his eyes to gaze upon ex-wife Amber Heard as she took the stand. He kept his eyes averted and never looked at her for her entire testimony, which lasted several days. When Heard finally was approached by Depp’s attorney Camille Vasquez, the lawyer came out swinging, grilling Heard on why Depp can’t look at her. Taped conversations revealed that a desperate Heard broke the restraining order she had gotten against Depp in order to beg and plead with him to let her back into his life while ordering him to look at her. “You will never see my f*cking eyes again,” said Depp.

In the saga that is the defamation case against the Magic Mike XXL actress, many archetypes have emerged that are hard to ignore. When I wrote the book Believe Evidence: The Death of Due Process from Salome to #MeToo, I spent a lot of time looking at mythology and literature, searching for examples of treacherous women. I didn’t look at Greek mythology because frankly, I had enough material to work with from Shakespeare and Miller, but it’s hard not to make the connection to the tragic story of Medusa.

I think I found #AmberHeard‘s archetype. Stay tuned for my analysis on @PJMedia_com #VIP sign up today! (promo code FOX for a discount!) pic.twitter.com/tmsAA5nwmQ

Medusa was the daughter of two sea monsters whose children were called gorgons. Medusa was born beautiful while her sisters were ugly monsters. This dysfunctional family is where it all began for both Medusa and Heard. According to Heard’s testimony, she claims her childhood was full of abuse and neglect … but also soup kitchens, straight A’s, working with deaf children, and a lot of horses. Much like myths, it’s difficult to make out which parts of Heard’s stories contain truth.

Myths help us understand the world around us. The Greeks, like most cultures, wrote their mythology to explain human nature and the human experience. In Medusa’s mythology, she had an affair with a very powerful god, Poseiden, in an inappropriate place: Athena’s temple. One doesn’t mess with Athena, goddess of war, unless one wants to suffer. Athena turned Medusa into a monster with writhing snakes for hair whose glare would turn men to stone. But her face remained so beautiful that men couldn’t help but look at her. You could say that on the crazy/hot matrix, Medusa was at the highest point in the danger zone. Every man who was captivated by her beauty and would try to fix her perished.

Hyperallergic had an interesting review of a Medusa art display at the Metropolitan Museum of Art.

When the public encounters a person like Heard, the myths take on new significance. The ancient people tried to warn us. Why don’t we learn? Of course you can’t “believe all women” — some of them will literally kill you. (See every episode of “Snapped” on true crime TV.)

Heard certainly has the femme fatale bit down, or at least she did before she got sloppy and the public heard tape recordings of her which revealed that behind her beautiful face was a writhing nest of violence and rage. There’s something about Heard’s stare that is particularly unnerving. Several lawyers who have been reporting on the case from inside the courtroom believe they may be on the receiving end of her withering glare (and PR machine). Many of their live streams were removed from YouTube following Thursday’s hearing. Ian Runkle, a Canadian lawyer who hosts a popular YouTube channel discussing law, reported that Heard recognized him in court and gave him a look that chilled him.

“There was an interesting moment where Amber Heard turned and sort of directly looked at me and the people next to me and cracked this weird smirk,” Runkle said. “That felt real weird.”

Runkle’s live stream was removed from public view on Thursday night and flagged as spam by YouTube. 37,000 viewers were watching the live report at the time. “I’m not used to having powerful enemies but I guess that’s kind of a thing now,” said Runkle.

The jury isn’t looking at Heard, either.

Depp came to believe at some point that eye contact with his personal gorgon is a bad idea. When he fell in love with her, he was convinced she was the second coming of a silver screen star of old Hollywood, like Lauren Bacall. He even called her “Slim” as a nod to Bacall in To Have or Have Not, starring Humphrey Bogart and Bacall. She must have mesmerizing eyes, among other things. In audio recordings, Heard begged Depp to look at her again, knowing perhaps that her power is in her eyes. If she could make him look at her, see her beauty again, she could retain that power over him that keeps the $500 bottles of wine flowing to her and her coven of freeloading pals squatting in penthouses one through five.

But that time, it didn’t work. He’d seen the snakes. He’d figured it out. He even covered his eyes with his tinted glasses so she couldn’t lock on them to ply her wiles. This recording is both heartbreaking and fascinating, as it seems to be the moment she lost her power over him. She broke the restraining order she had filed against him, the man she says she was terrified of and who beat her mercilessly, to beg him for a hug.

“A hug will save it all,” Depp said sarcastically as Heard screamed and cried. “After all this sh*t you just said and accused me of, you want to touch me?” Heard repeatedly said, “yes, yes, please.” But it was too late. Her internal ugliness had been revealed as plain as the snakes on Medusa’s head. “No, because I’m nothing to you. I will always be nothing to you … No. We will never see each other again,” said Depp. It’s at that point in the recording that Heard physically reached to take Depp’s glasses off, attempting to make that eye contact that had worked so well for her in the past. Depp scolded her for trying to remove his glasses and said, “You will not see my eyes again.” And he has wisely kept that promise.

You can’t fix her, Johnny. No one can.

Heard and women like her are the reason mythology exists that paints some women as murderous, treacherous whores. That type does exist, and you can read about a bunch of them in my excellent book, Believe Evidence: The Death of Due Process from Salome to #MeToo. Jezebel, for example, was particularly disgusting, fabricating evidence to have Naboth murdered so she could improve the view from her window.

In opposition to the archetype of the treacherous whore, the partner, mother, nurturer, and wise woman also exist and are not vilified but praised and honored. It is disingenuous to proclaim that women are somehow being mistreated because the public has identified a gorgon in our midst. The media’s attempt to paint Heard as a victim has been sickening to watch. All women are not saints. Some women are treacherous beasts. And we found one. Hopefully, the jury will cut off her head with a solid judgment against her as a warning to other Medusas not to try it.

But this sad story should be a warning to those who would try to fix Medusa because her beauty is simply too enthralling to turn away from. Don’t do it, brothers. You can’t fix her. Beauty is fleeting, but goodness will bless your life and the lives of your children forever. Seek goodness, truth, and beauty in that order. And remember what my mother always told me: “Beauty is as beauty does.” Try to see past a beautiful face and watch her actions. That will tell you all you need to know. (And if she drinks two $500 bottles of wine a night and forces you to live with a coven of weirdo freeloaders, run.)

Take my very good advice in this clip and avoid future entanglements with Medusas.

The best thing I’ve heard come out of the Depp/Heard trial so far. @RekietaLaw and @MeganFoxWriter give the best advice for men you’ll find this decade.