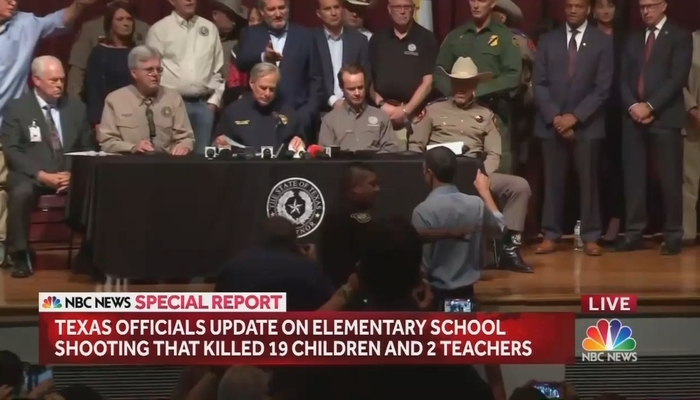 Wednesday afternoon’s press conference on the Uvalde, Texas school shooting descended into shenanigans during what should have been a solemn occasion to update the public on the investigation when Democratic gubernatorial candidate Robert O’Rourke heckled Governor Greg Abbott (R) and other elected officials, blaming them for the murder of 19 children and two teachers. Naturally, the broadcast networks refused to speak out against O’Rourke’s antics and barely acknowledged O’Rourke’s party ID.

CBS Mornings co-host Tony Dokoupil interjected after O’Rourke was escorted away, saying it was likely “over a key question from the press conference” in which “Governor Abbott said…the problem” here “was mental health, not guns.”

Of course, no party affiliation.

O’Rourke interrupted Lt. Gov. Dan Patrick (R), so Dokoupil did the same once Patrick began speaking to give O’Rourke more oxygen over his highlighting of “a difference of opinion, you might say, in the most dramatic form over what exactly is to blame for the massacre in the building behind me, and what exactly this community needs now, healing for those who are suffering or a change to policy to help the next victims, the victims to come.”

To her credit, correspondent Janet Shamlian conceded that not only was O’Rourke’s stunt “very clearly staged,” but it was planned well in advance thanks to “two people across the aisle from me” who saved him seat so he only had to enter just prior to the start of the press conference.

Dokoupil equated O’Rourke’s shameless behavior with the press conference itself, saying both were engaged in a “political do-si-do[.]”

He then bailed out for O’Rourke’s impromptu presser outside the Uvalde high school and summed it up as having discussed “gun control, a policy platform that is important to him and many others in his parties and many Americans, for that matter.”

Dokoupil cited a CBS News poll as proof that Americans support O’Rourke before moments later concluding with the take that the “right” to own firearms are “threatening” the “blessing” of “children” (click “expand”):

Key to the debate that followed and the outburst between him and Beto O’Rourke, the governor said there is no known mental health diagnosis for the gunman who slaughtered so many in the building behind me. That would seem to gravely imperil the next statement, which was that mental health is the root of the problem here in Texas. I want to let our viewers know about a recent CBS News poll that was taken after the Buffalo, New York mass shooting, the one from a weekend ago, before the shooting here in Uvalde. It found 54 percent of Americans — so a slim majority — do want laws covering the sale of guns made more strict than they are now. 30 percent said the laws should be kept about where they are. And 16 percent want them to be even less strict. It gives you a sense of where the country is. Most people want some sort of tightening of the regulations as they exist.

Governor Greg Abbott said children are a blessing. That’s certainly true. Guns are right and one seems to be threatening the other at the moment.

Over on ABC, Good Morning America co-host Amy Robach similarly interjected as O’Rourke ended his confrontation and again didn’t give a party ID: “That is Beto O’Rourke yelling at the governor — Governor Greg Abbott, saying this could have been avoided, you can see how passionate and heated he is.”

ABC also chose to not give Patrick the light of day and instead followed O’Rourke’s charade outside. While carrying his remarks, ABC included a (D) in a chyron.

Robach didn’t rule on O’Rourke’s conduct besides saying “passions are high.” Inside the auditorium, correspondent Mireya Villarreal shared what she saw form her vantage point, adding: “Beto is up for election right now. He is running for governor here in Texas.”

Chief national correspondent Matt Gutman followed the failed candidate outside and, afterwards, noted that O’Rourke “just blew…up” and “destroyed that press conference” by going against the “certain decorum” at “these kinds of very solemn press conferences.”

Gutman summarized O’Rourke’s screed, claiming the assailant purchased his guns without a background check and it was somehow a travesty he was able to do so despite not having passed his driving test (click “expand”)

I don’t think anybody expected that to happen, I’ve seen a lot of these and generally there is a certain the quorum to these kinds of very solemn press conferences. The governor talking about 19 dead children, truly making a dramatic, slowing it down the way he was talking, but Beto O’Rourke came in there just blew it up by demanding answers, saying you know mental health is a problem. It’s not the solution. He said basically that the definition of insanity is allowing an 18-year-old boy essentially, a young man, to buy an AR-15 style rifle with a high capacity magazine without necessarily a background check or needing a license. This kid did not even have a drivers license — couldn’t drive a car. That is what O’Rourke was here to say. It was obviously quite a dramatic way to make a point and it essentially destroyed that press conference and he is still holding court right now, talking about what actually needs to be done and making a big point of noting that Governor Abbott will headline the NRA meeting in Houston here in Texas this week. So, he’s talking about mental health, the governor is, but not talking about the other major issue, which is guns in a state that is seen five of the most deadly mass shootings in the nation’s history. He’s demanding action, saying that the action being offered by Governor Abbott is not action at all. So, I think offering the very different side of the story, a lot of people here even in this community are talking about as well. How does a kid like that get an AR-15 with a high capacity magazine without any question asked[.]

And on NBC, senior national correspondent Tom Llamas said after the hubbub that O’Rourke was “essentially putting the onus on the governor and the leadership in Texas” as he’s “running for office here in the state of Texas, statewide office.”

After allowing much of the press conference to air, Llamas stated on-air that O’Rourke’s “running against Governor Abbott for the statewide office as a Democrat.”

Correspondent Morgan Chesky was in the massive crowd of reporters following their dear Beto, reporting afterwards that O’Rourke’s presence made for “a stunning scene to…play out in realtime here as this community tries to move forward as best it can.”

To see the relevant transcripts from May 25, click here (for ABC), here (for CBS), and here (for NBC).