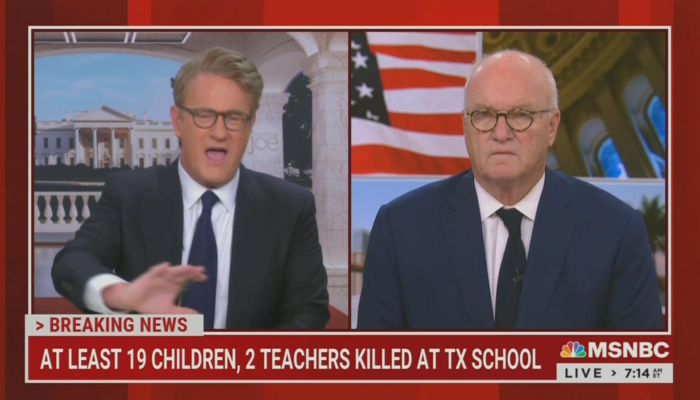 Excoriating Republicans on today’s Morning Joe in connection with the Uvalde school shooting, Joe Scarborough broke out one of the most shopworn of liberal cliches: that Republicans believe that “life begins at conception, and ends at childbirth.”

Scarborough went on to list a string of liberal programs or issues that Republicans don’t support. So in Scarborough’s mind, unless you’re a fan of big-government healthcare and more gun control, you’re not pro-life.

In the course of his rant, Scarborough twisted himself into semantic knots to avoid recognizing that before birth, a baby is just that: a baby. Instead, Scarborough referred to the baby in the womb as merely “the being.”

Scarborough even seemed to deny that the baby is “alive” before childbirth. He said that Republicans aren’t interested in protecting life after the child is “actually alive.“

So before birth, a baby is not “actually alive,” Joe?

How low must Scarborough sink, how cravenly must he grovel— abandoning his erstwhile conservatism— to satisfy his MSM masters, and to gain acceptance in his liberal social circle? Pathetic.

On Morning Joe, Joe Scarborough referring to a baby before birth as “the being,” and suggesting that before birth, babies are not “actually alive,” was sponsored in part by GlaxoSmithKline, make of Nucala, Facebook, and Servpro.

JOE SCARBOROUGH: The refusal to pass legislation, that 90 percent of Americans support, universal background checks. The refusal to at least make it more difficult for 18-year-olds to walk into a store and buy weapons of war? That refusal comes from the same party that’s been reminding us over the past several weeks that they are the party of life. And if you don’t agree with the reversal of a 50-year constitutional right, that 70 percent of Americans don’t want overturned, then you are a baby killer.

They go — they, they, they certainly go against what’s reasonable and rational to protect our children while they are studying in elementary schools. To protect parishioners when they are praying to Jesus in church pews. To protect the faithful when they’re in synagogues praying to God. To protect country music fans, when they are listening to music at a country music festival. The party of life — what a joke! Not even close! Not even close. Not even close. And baby killers — please, you can retire that word. You can retire it right now, because this is another example of a lot of Republicans believing that life begins at conception and ends at childbirth.

This is just the latest example. The party of pro-life? How grotesque and perverse that any Republican would ever even say that.

‘Top Gun: Maverick’ Shows Hollywood the Way Back From Woke Poison Pill
Conservative Talk Host Mark Levin To Moderate Republican Congressional Debates In Florida
MSNBC guest tells Americans to ‘calm down and back off’ about high gas prices
Mark Levin clears up misconceptions about SCOTUS sending abortion conversation back where it belongs
DEVELOPING: Senators Come to Final Agreement on Gun Control – May Hold Vote This Week