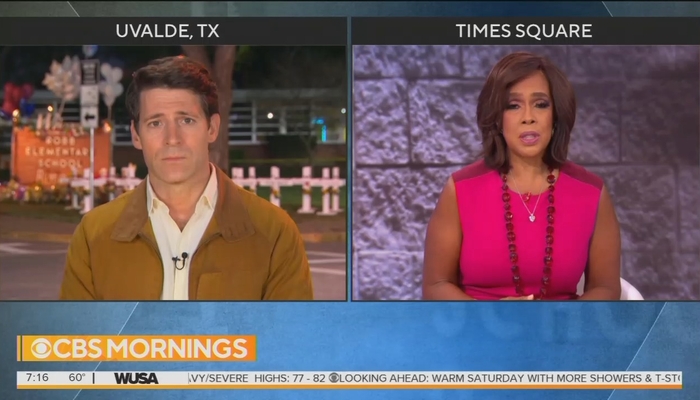 Largely averse to facts, logic, and nuance, ABC’s Good Morning America and CBS Mornings continued Thursday with their insufferable campaigns for gun control in light of the Uvalde, Texas school shooting (which wouldn’t have stopped the gunman) and shaming of anyone who opposes their policy changes, suggesting they’re uninterested in protecting kids.

CBS Saturday Morning co-host Michelle Miller got right to it as part of the show’s “Eye Opener,” saying “[t]he horrifying attack is reigniting the gun reform debate between those who see a problem with guns and those who don’t.”

Reacting to a clip of ABC’s Jimmy Kimmel pleading for gun control alongside mental health resources, co-host and Democratic Party donor Gayle King said “it doesn’t make sense to anyone.”

Co-host Tony Dokoupil wrapped part of his coverage from Uvalde with an emotional conclusion that “[t]his community is going to be living with this forever and it’s hard to imagine that there is nothing that anyone can do to stop this from happening.”

This launched King into a commentary about how it’s “aggravating and so painful” since “there is something that can be done” to ensure mass shootings like this one don’t happen again in permanently banning anyone outside the active military from owning anything like one of those “assault rifles.”

However, she argued, “people” (as in Republicans) “just don’t want to do what needs to be done” to protect children (click “expand”):

But Tony, that’s why this is so aggravating and so painful, because there is something that can be done. People just don’t want to do what needs to be done. There is — I don’t even know how we can continue to watch this happen time after time after time, and say that it’s okay for these assault rifles to be on the streets, and now blame it on mental health. I don’t care who you are. Nobody needs an assault rifle in this country, unless you are a trained professional. It just doesn’t make any sense.

So when we say there’s nothing we can do, that’s just not true and the pain that that man felt, I saw him say, you know, she was such a good girl. You know, she brushed her teeth every day. I mean, that was such a relatable, and such a thing that as parents, we all know, when we all rejoice. This pain is too much. This pain is too much. And we keep hearing this, too. Maybe this will be the time, maybe this will be the time. I have to keep holding on to that.

Moments later, King added that “[m]any Americans, as you see are frustrated with a capital F at the lack of government action following these attacks”

King also trumpeted O’Rourke as someone who “brought his frustration to Uvalde” to tell incumbent Governor Greg Abbott (R) that he’s “doing nothing” to save children.

GMA had more from liberal congressional correspondent Rachel Scott, who appeared hours earlier on Wednesday’s World News Tonight with footage of her ambushing senators opposed to her factually-challenged gun control agenda under the guise of “the majority of Americans want[ing] some kind of action.”

Scott even joined in President Biden’s argument that Republicans lack a spine: “The President is calling on lawmakers to have a backbone, but many Republicans are not budging.”

She also cited Texas gun laws as having been “recently loosen[ed]” in some sick way to blame state gun laws for the shooting (without evidence). Things only got dumber when she argued for “background checks” because polls show Americans support them.

SENATOR CORY BOOKER (D-NJ): We’ve had school shootings this year, dozens of them. What does it take?

SCOTT: But getting Republicans on board will be an uphill challenge. [TO GRAHAM] Can you assure the American people that this time something will get done?

SENATOR LINDSEY GRAHAM (R-SC): I can’t assure the American people there’s any law we can pass to stop this shooting.

SINEMA STAFFER: She’s in and out.

SCOTT [TO SINEMA]: 19 children are dead.

SINEMA STAFFER: Thanks so much.

SCOTT [TO SINEMA]: Can you give us a comment about it?

NBC’s Today largely stayed away from politics and focused on the families, the lives lost, and the investigation into went wrong (other than two nods to O’Rourke’s charade).

During the 3rd Hour, co-host Craig Melvin made a semi-overt political reference when he grew emotional in talking about having covered mass shootings during his career, saying that “it’s not political” to say no more since such tragedies don’t “happen in other parts of the world.”

Thursday’s gun control lobbying was brought to you by advertisers such as Apple (on ABC) and Nature’s Bounty (on CBS). Follow the links to see their contact information at the MRC’s Conservatives Fight Back page.

To see the relevant transcripts from May 26, click here (for ABC), here (for CBS), and here (for NBC).