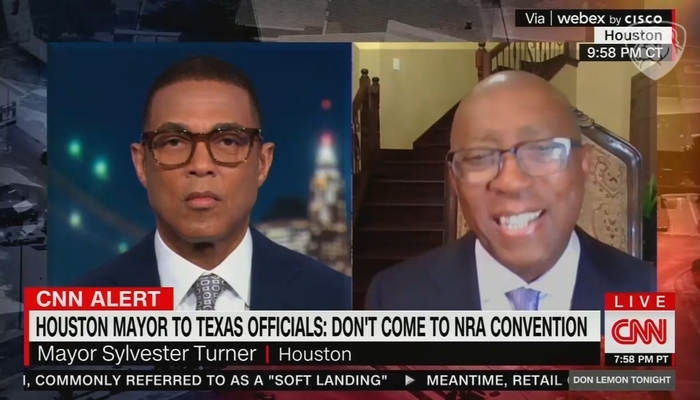 On the Wednesday edition of CNN’s Don Lemon Tonight, the show’s titular host allowed Democratic Houston Mayor Sylvester Turner to bemoan the city’s upcoming annual NRA meeting. Lemon repeatedly questioned the Mayor as to why the state of Texas is not canceling the upcoming NRA convention that is to be held this upcoming weekend, May 27-29.

Lemon began by asking the mayor for his thoughts on “all the people, including your governor and one of your senators” attending the NRA convention so soon after the massacre. Giving his answer respectively to his fellow politicians of Texas and all around the nation, Mayor Turner urged each one to stay home.

“You should not come,” Turner responded, continuing: “you can’t say two days ago, yesterday, that you offer prayers and condolences to these families and then three or four days later, appear at the NRA promoting the use of guns and assault weapons.”

However, he noted that his city was contractually obligated to hold the convention. KHOU, a local Houston television network, also has quoted Turner as saying: “we simply cannot cancel” the convention. Turner instead remarked that he wished the event could be postponed, at least. Urging the NRA itself to at least postpone the event, his aim to allow grief for the families involved to bury their children and plan funerals properly without the reminder of the tragedy that took place only a few days before.

Houston is nearly 300 miles (278) from Uvalde where the shooting occurred.

Lemon pressed the mayor to reiterate that despite his misgivings, his hands were tied: “So, you, legally, you can’t do it?” He added that he was just asking on behalf of viewers at home who might be wondering whether Turner had done enough and why the convention was not canceled. Inferring that the Mayor hadn’t searched for the “emergency loophole or extraordinary.”

The dialogue went on for a few seconds before the conversation ended. Having given the Democratic mayor ample time to clear his name in the eyes of his presumably anti-NRA audience, Lemon moved on. As Turner had said to previous news sources, just because they do not agree with policies and beliefs of the organization, they can’t simply cancel the event.

This segment is sponsored by Advil and Allstate. Their contact information is linked.

The transcript is below. Click “expand” to read more.

DON LEMON: So joining me now, the mayor of Houston, Texas, Sylvester Turner. Mayor, thank you. Appreciate it.

MAYOR SYLVESTER TURNER (D), HOUSTON, TEXAS: Thanks, Don. Thanks for having me this evening.

LEMON: So, I understand that you can’t cancel the NRA convention coming to your city on Friday. But what do you say to all the people, including your governor and one of your senators coming just days after this massacre?

TURNER: Well, certainly, they don’t have to come and I think it would be respectful for the families who are planning funerals for their children for them not to come. You can’t say two days ago, yesterday, that you offer prayers and condolences to these families, and then three or four days later, appear at the NRA promoting the use of guns and assault weapons. So, what I would say to the governor, congressperson, legislators, elected officials, with all due respect, you should not come. And then what I would say to the NRA, even though the city cannot cancel a contract because we don’t agree with their position on guns, certainly, the NRA can postpone their convention for a week or two to allow the families to bury their children.

LEMON: So, you, legally, you can’t do it? And there is no, you know, emergency loophole or extraordinary — you just can’t do it, right?

TURNER: Don, you know, we’ve looked at it, but you can’t cancel conventions and conferences because you don’t like the politics —

TURNER: — or the positions that they hold without [inaudible] makes it illegal.

LEMON: I just know that people at home are going to be wondering why the mayor couldn’t cancel the convention. So, I just want to make sure I got the explanation for the viewers at home. Listen, mayor, according to the NRA website, advertising Donald Trump’s speech, no firearms will be permitted in the hall while Trump is present. Why not? If guns in the hands of good guys make everyone so much safer, clearly, that is not what the Secret Service believes.

TURNER: Well, and — and I think that speaks volumes. So, for the former president to come, no guns at the convention hall in a convention hall. But if you are attending graduations, if you are attending concerts and other events, guns are allowed. And in the state of Texas, the legislature has made it very –literally, the state of Texas has preempted local officials like myself, mayors, county judges from imposing restrictions on where guns can be allowed. If we say no to certain venues, then we are violating state law. But the President, the former President of the United States can come to the NRA, and in that particular venue, no guns are allowed in order to protect the president and the other people who will be there to listen and adhere to them. Now that — if that doesn’t speak volumes, I don’t know what does.

LEMON: Listen, I’ve got to ask you this because I know your city sadly has been no stranger to shootings. There have been several shootings in your city in just the past few weeks. What are you doing in Houston to deal with this rise in gun violence, Mayor?

TURNER: Well, we put forth, Don, what we call One Safe – [SIGNAL CUTS OUT] —  In January, basically, what it is, we are tackling it on all fronts. We are not just adding more police. We are through the use of overtime. We are also utilizing more technology. We are putting on a great deal of resources and fighting domestic abuse, which is up about 40 percent over a year ago. We are addressing what we call crisis, people who are in crisis, people with mental behavioral health issues, the homeless, substance abuse, and then we are putting a great emphasis on working with the community, credible messengers, programs. A lot of those as a community plus law enforcement working together. What we are seeing, Don, since February — since January when homicides were up 65 to 70 percent over last year. As of this morning, when I looked at the number, we are down to 6 percent. And in almost every other category of violent crime, we are down, we are below where we were a year ago. So, we are investing about $52 million in our “One Safe Houston” initiative. It is a holistic approach. And Don, the numbers are trending in the right direction.

TURNER: It requires all hands on deck.

LEMON: We hope that it continues to trend in the right direction, and that you can be a model for the rest of the country.