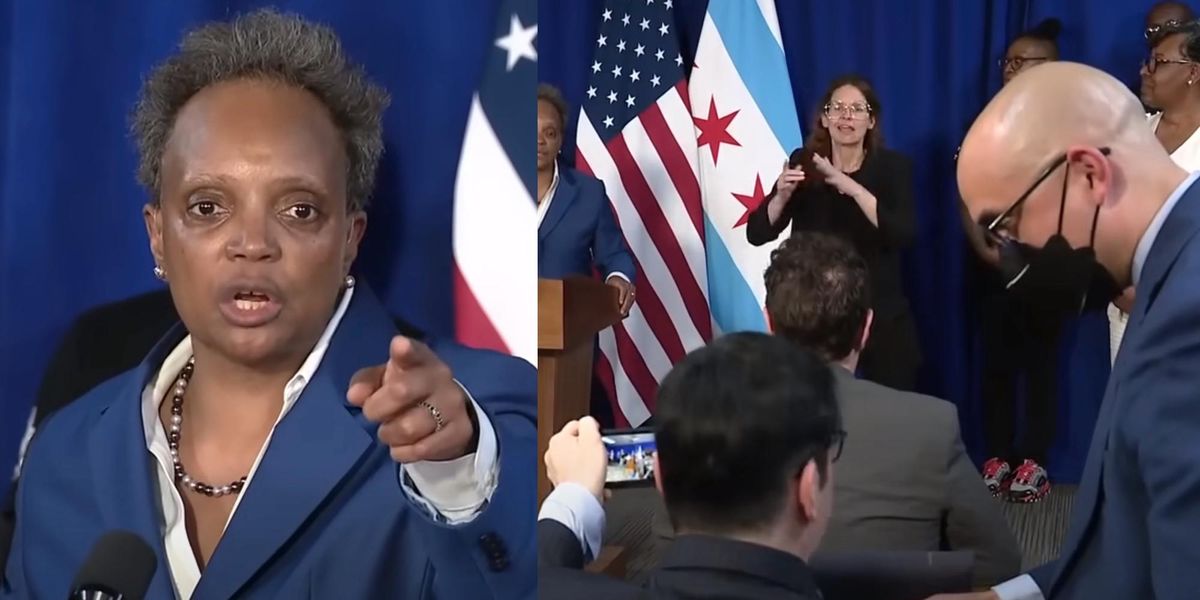 Chicago Mayor Lori Lightfoot melted down during a media briefing where a reporter challenged her to retract her overheated rhetoric about the expected overturn of the Roe v. Wade decision.

Lightfoot angrily interrupted and shouted him down as he tried to follow up on his questions during Wednesday’s media briefing.

“Mayor Lightfoot, you’re patting yourself on the back today for rushing through a casino that 80% of the people in the 42nd ward say they just don’t want,” the reporter said.

“You’re saying that this is going to, if it’s ever built, that is, result in tourism, result in conventions, but the real reason why we don’t have the tourism or we don’t have conventions is because of violent crime,” he continued. “You issued a violent tweet ‘call to arms’ and since then, we’ve had multiple incidences of mob violence in downtown Chicago, we’ve had shootings, murders, mass shootings — you talk about Texas — mass shooting here in Chicago.”

“Is there a question? What is it? Let’s get to it,” Lightfoot interrupted.

“There is indeed, absolutely!” he replied.

“A speech is not a question. Let’s get to it,” she continued to interrupt.

“You went to Texas to a gay and lesbian fundraiser, okay? I’ve talked to the taxpayers, the voters, the citizens of Chicago, mostly black and brown, they say that they resent that,” the reporter continued. “Will you recall, rescind your violent tweet, to call to arms?”

“Let him talk. The more he talks, the more stupid he sounds,” she interrupted again.

“Will you rescind your ‘call to arms’ tweet in the light … in the light of the mass shooting in downtown Chicago, as stupid as you think that may be?” he added.

“So let me just deconstruct the series of lies that you just spewed, as you do every time you come to one of our press conferences,” Lightfoot responded.

Lightfoot claimed that tourism was not down in Chicago based on a statistic saying it was only down to 90% capacity in one area from the rate before the pandemic.

“Somehow, is the call to arms — the call to action that I issued — in the context of the Supreme Court decision to overturn Roe v. Wade and basically turn back the clock 50 years time where women are not gonna be able to be in control of their bodies,” she continued.

“No sir, I will not stand down, I will not retreat, because women in this country are not gonna stand for some unelected body to tell us that we don’t have the right to control the circumstances and the when and where in which we produce our children!” Lightfoot said.

“You’re gonna let me speak, sir. You’re not gonna talk over me; that’s not the rules here in this press conference, and if you don’t want to abide by those rules, you can take your nonsense some place else, because I am about full up with you!” she added.

Lightfoot went on to rant about tourism some more before the interview turned into a screaming match.

At this point, one of Lightfoot’s goons stepped in to berate the reporter.

“I will not let you spoil this moment, and if you do not stop, I will ask you to leave, and I will make sure the police take you out of here!” She threatened. “You will not act like this sir!”

Lightfoot ended her tirade with an impression of Jack Nicholson.

“Now you don’t want to hear the facts, because you can’t handle the truth, sir!” she concluded.

Here’s the video of Lightfoot melting down:


Lightfoot squares up with reporter after City Council meeting: ‘The more he talks, the more stupid h

Dobbs and Kennedy: Two more victories in a long line of recent religious freedom decisions from SCOTUS
We Know You Want to Run, Hillary… Just Admit It
JUST IN: Ghislaine Maxwell Sentenced to 20 Years in Prison in Epstein Sex Trafficking Case
Allies of Karine Jean-Pierre say Biden admin set her up for failure by having a white man standing by for help
Percentage of Americans saying the country is headed in the wrong direction spikes to 85%