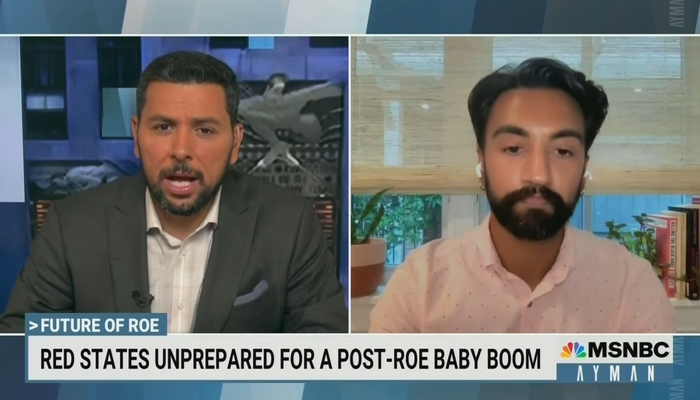 States with some of the nation’s strictest abortion laws are also some of the hardest places to have and raise a healthy child, especially for the poor, according to an analysis of federal data by The Associated Press.

The findings raise questions about the strength of the social safety net as those states are poised to further restrict or even ban abortion access following an expected U.S. Supreme Court decision later this year. The burden is likely to fall heaviest on those with low incomes, who also are the least able to seek an abortion in another state where the procedure remains widely available.

Mohyeldin showed the headline on screen and proclaimed:

MOHYELDIN: Red states aren’t prepared for a post-Roe baby boom. If the Supreme Court does in fact overturn Roe v. Wade. The red states poised to the ban or severely limit abortions already tend to have limited access to health care, they have poor health outcomes, and fewer safety net proclaims in place for mothers and children.  The ensuing increase in births will likely leave families in tough circumstances, in strained systems that are already hanging by a thread in these states. 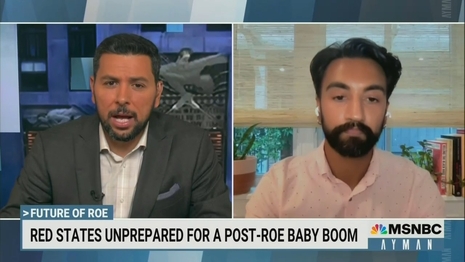 The MSNBC host then brought on Dr. Bhavik Kumar, an abortionist with Planned Parenthood Center for Choice, in Houston. “Doctor, thank you so much for making time for us. What has your experience been as an abortion provider in the wake of the Republican-backed legislation that all but banned abortion access in your state?”

The abortionist replied: “This is certainly not something that’s new for us in Texas, it’s been probably a decade or more, where Republican elected officials have been passing abortion restriction after abortion restriction – and it’s become more extreme with time, and certainly, we’re in the most extreme place we’ve been, ever.”

Ever? Abortion was illegal in Texas until Roe vs. Wade was imposed on all 50 states in 1973.

Spinning off the AP story, Mohyeldin asked the doctor “How concerned are you about red states like Texas, not having the infrastructure to support the requirements or health requirements of a baby boom if Roe v. Wade is overturned?”

Dr. Kumar complained that abortion bans are fatal for women. “When they don’t have access to abortion care, they don’t have access to health care that they need, and we also know the health care access industry, you know, as far as insurance access, they need to find a primary care doctor to have the things that they need before they become pregnant, while they’re pregnant, and then also after, in not in place, they will suffer. People will suffer, and some people will die, unfortunately.” But politicians are “pushing abortion bans at the cost of people’s lives.” They don’t seem to think the unborn babies have “people’s lives.”

All this abortion messaging was brought to you by Liberty Mutual.

Column: Dana Milbank’s Uncivil War on GOP ‘Destructionists’
White House COVID-19 response coordinator claims that COVID deaths would nearly be eliminated if people would get their vaccinations and use Paxlovid
Liz Warren says ‘everyone’ told her they would have voted for her in the presidential primary if she had a penis
Hollywood Is Slowly Committing Suicide
Nets Ignore Former Dem Congressman Under Federal Indictment