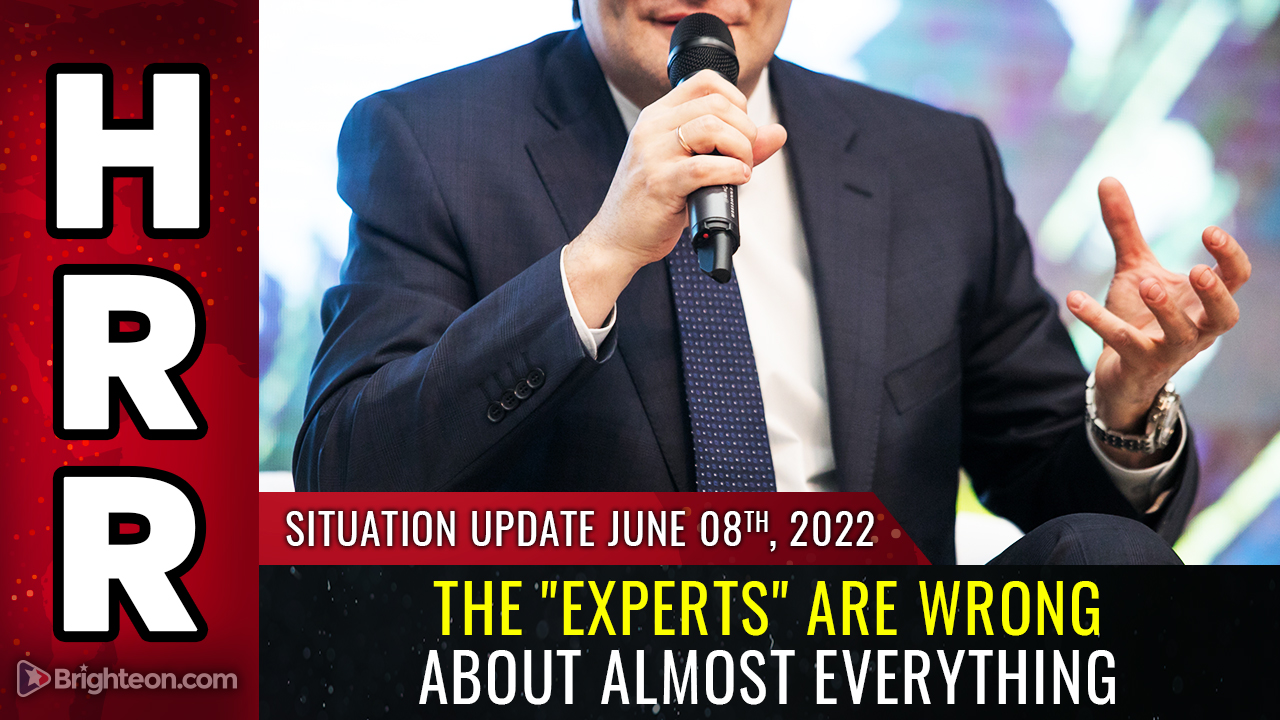 (Natural News)
Have you noticed how the so-called “experts” are usually incompetent morons? We have experts in finance who don’t know that printing trillions of dollars causes inflation. We have experts in education and psychology who think mutilating the genitals of children is something to celebrate in the name of “pride.” We have experts in diplomacy who think Russia has no right to its own national interests. And we have experts in science and medicine whose vaccines are so deadly, they have to resort to censorship and paid propaganda to cover up all the vaccine deaths.

The “experts,” it turns out, are wrong about almost everything.

How did we get to this place? Because people prefer comfortable lies over hard truths, so the most incompetent “experts” who are willing to lie get promoted to positions of influence and power. The more they lie, the higher they rise in the system. Anyone who tells the truth, on the other hand, gets sh#tcanned.

Anyone who tells the truth about almost anything — gender, food science, climate, free energy, geoengineering, etc. — is banished from having any influence in society.

So now, as a result of all this, we are ruled by the cognitively retarded who cannot process reality and have no ability to make decisions in meaningful ways that benefit society.

This has all happened before, of course, and the next step in this scenario is the total collapse of the empire. That’s exactly what’s coming for America and much of western civilization, it turns out.

A great example of all this is Zelensky’s information war in Ukraine vs. Russia’s real (kinetic) war. Ukraine’s corrupt, inept government is focused almost entirely on pushing out information propaganda rather than fighting a real war. On the battlefield, Ukraine is losing so badly that the entire Ukrainian military is likely just weeks away from a total collapse. Yet the “experts” continue to claim that Ukraine is winning and Russia is losing and somehow dozens of Russian generals have all been killed recently, although there is zero evidence to back such absurd claims.

Russia, meanwhile, is actually shelling Ukrainian forces with a merciless barrage of high explosive artillery rounds. No fakery is needed when you are communicating through high explosives. The detonation of each charge sends an unmistakable message: Leave this are or perish.

Ukraine has experts in psychological warfare and bullsh#ttery. Russia has experts in armor and artillery. Guess which one is going to win in the end?

In the competition between bullsh#t and bombs, bullsh#t loses.

All the incompetent, retarded leaders of the West still haven’t come to realize this… largely because they are incompetent retards. They think they can bullsh#t their way to some claimed delusional fantasy of global domination, even as their own currencies are on the verge of collapse and their economies are imploding by the day.

As reality sinks in, LIES are all the regime has left

So of course Biden’s press spinsters try to lie about everything because that’s all they have left. When gasoline hits $5 / gallon average across America — which will likely happen in mere days — White House bullsh#t artists will tell you that Europeans pay more and you should be grateful you are paying the highest prices in history, because it could be even higher.

As food shelves go bare across America, no doubt Biden’s bullsh#t brigade will tell you to stop whining and enjoy the “Biden weight loss diet for America” that promises to solve the nation’s health care crisis through mass famine.

When the dollar implodes and goes to zero — a scenario that’s getting closer by the day — America will be plunged into economic chaos. So of course Biden’s bullsh#tters will need a scapegoat, and they’ll likely blame Putin or perhaps even gold owners who ditched the dollar to buy gold and silver instead. You can see the WashPost headline now: “Dollar under attack by gold hoarders” and they will weave some fantastical story about how buying gold destroyed the dollar currency, and how massive money printing had nothing to do with it.

In a world of incompetent “experts,” LIES are their currency, and TRUTH is their enemy.

The more the experts have to lie about everything, the closer you know you’re getting to the end of the entire system. You’ll also notice that the more lies they tell, the more they have to censor the truth, so censorship rises as the lies get more and more absurd.

Under the combined umbrella of lies, censorship and tyranny, the total collapse of the United States of America is fast approaching. This will be a wide-ranging economic collapse, food collapse, culture collapse and geopolitical collapse.

This collapse will likely happen before the end of 2025, and it could very well take place even before the 2024 elections, meaning there might even be elections in 2024.

Today’s Situation Update podcast delves into this key issue and covers much more: