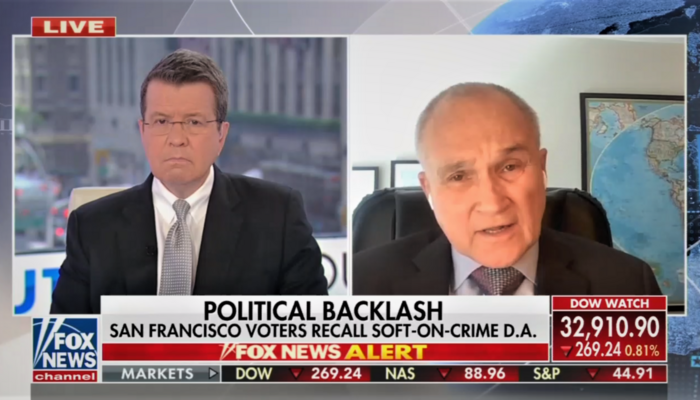 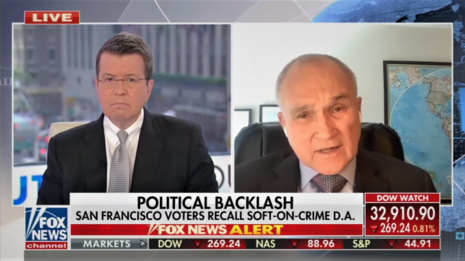 Fox News host Neil Cavuto asked former New York City Police Commissioner Raymond Kelly about the “pent-up frustration that a lot of voters have” due to the lawlessness in many American cities. Kelly drew a direct connection between liberal billionaire George Soros and soft-on-crime district attorneys (DAs) like recently ousted San Francisco DA Chesa Boudin on the June 8 edition of “Your World”: “Boudin — as other DAs — is the product of a very insidious plot on the part of George Soros.”

“We know that [Soros], in a way, has succeeded. Look at the district attorneys in New York, in Chicago, in Los Angeles, of course, San Francisco — they’re all George-funded winners of the election,” Kelly told Cavuto. ”What George Soros did was use 40 million dollars to contribute to these elections.”

The Law Enforcement Legal Defense Fund found that “Soros has spent more than $40 million on direct campaign spending over the past decade to elect prosecutors.” The report also revealed that the “US currently has at least 75 Soros-Backed social justice prosecutors, supported through campaign dollars and/or Soros-funded progressive infrastructure groups.” [Emphasis added].

“We know that DA races are usually local races,” Kelly added. “He took a million dollars, at least, [to] each of these campaigns, and it made a huge difference. And I believe he’s going to continue to do this.”

Kelly explained that Soros has helped elect radical leftist DAs across the country for years. “He started this in 2016,” Kelly noted. “He’s contributed through his various organizations to seventy-five elections. We know that at least twenty-six of those supported candidates have won.”

Capital Research Center profiled 23 out of 26 Soros-backed DAs who received a total of “$29 million in funding” through a “personal network of political action committees (PACs) formed specifically to back left-wing DA candidates.”

Boudin reportedly received donations from a leftist network connected to Soros. He recently lost a recall election for being too far left and too soft on crime, even for California.

MSNBC: Inflation Reduction Act is ‘Marketing Genius’ for Democrats
Leftist opines that if abortion is prohibited, the government should pay women to bear children
California governor proposes $1.4 billion plan to keep last nuclear plant open
White House touts ‘Big news’ that the national average price for a gallon of gas has fallen below $4 per gallon
‘View profiles without pronouns’: Dating app called ‘The Right Stuff’ will cater to conservative singles