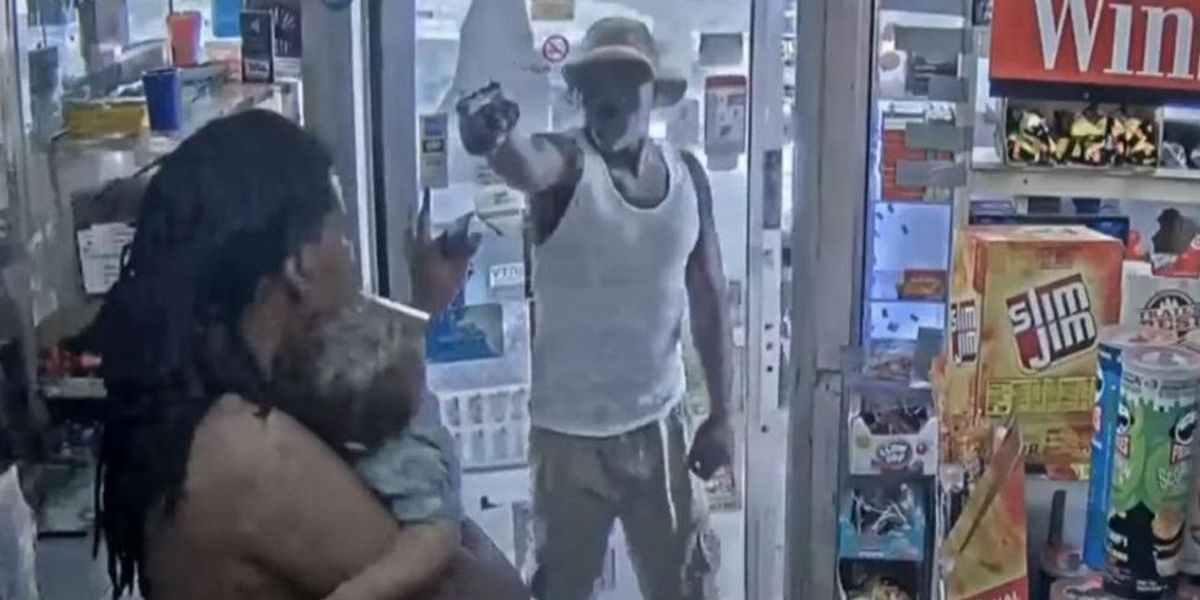 Chilling surveillance video caught the moment a man pointed a gun at another man holding a baby, and police say the gun jammed.

The startling altercation unfolded on Sunday, Father’s Day, in a Valero gas station in Detroit, Michigan, at about 5:50 p.m.

Police from Detroit’s Second Precinct released security video showing a man in a tan bucket hat and a white shirt approach the entrance of the gas station before brandishing his weapon.

He pointed the gun at the man with a 7-month-old baby sleeping on his shoulder.

That man with the baby threw his free hand up and shoved the gun away, which made the gunman walk back outside. He was seen struggling with the gun before walking away.

Here’s the video of the incident released by the police:

Police said that the two men had gotten into an argument a few blocks away from the gas station and that the gunman followed the other man to the Valero.

Officials are seeking help from the public to identify the gunman and charge him with aggravated assault.

Nearby residents were horrified at the video.

“Thank God he did what he could to block it, thank God the gun didn’t go off, but I mean, to even be targeting with your child in your hand, the psychology of that is just, beyond,” said one resident to WDIV-TV.

Officials said the father and the child were in good condition.

Later on Monday, officials said they had taken custody of a person of interest, but they offered no further information.

Elon Musk releases a trove of emails detailing the internal debate at Twitter over censorship of the Hunter Biden laptop story
‘We will shoot up your Newman Center with our new AR-14 rifles’: Jane’s Revenge allegedly threatens to kill pro-lifers at Omaha churches
Ken Burns Hysterically Warns of ‘Authoritarianism,’ ‘Nationalism’
Evading Chinese Censors to Post Videos of Protests Has Become an Art Form
New Survey Finds Political Polarization Is Eroding Public’s Trust In The Military