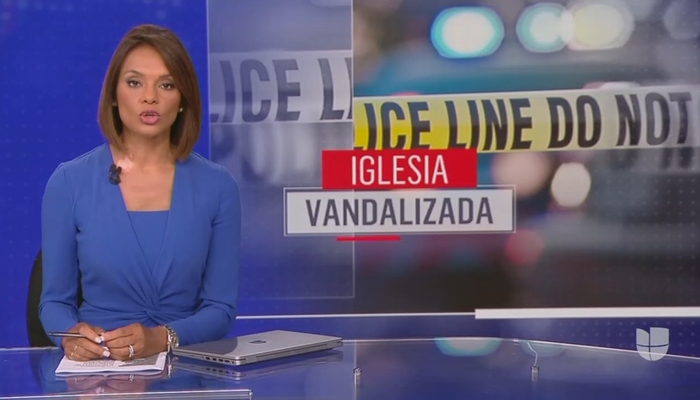 While pro-abortion activists wreak havoc across the nation by throwing firebombs into crisis pregnancy centers, threaten their personnel, crash churches half-naked, dox conservative Supreme Court justices and their families, and even show up at the house of justice Brett Kavanaugh attempting to kill him – the national Spanish-speaking media continue to give these violent incidents as little air time as possible.

Even after the U.S. Supreme Court announced its decision to overturn Roe v. Wade, fueling an upsurge in retaliatory attacks by pro-abortion thugs including Jane’s Revenge, the Latino corporate media have continued to underreport and underplay the ugliness of the bedlam caused by pro-abortion terrorists.

The scant coverage is exemplified in this Univision report: precisely 17-seconds of airtime to a violent attack on a Catholic church in Reston, Virginia after the SCOTUS ruling to overturn Roe v. Wade:

ILIA CALDERON:  Authorities are investigating the vandalism of a Catholic church in Virginia, following the landmark abortion ruling. One of its walls had “This won’t stop” written on it. Police and firefighters were alerted after finding graffiti and a small fire outside of the temple.

The no-name, no-details, no-interview report did little to calm the anxiety of churchgoers, not only from Virginia, but around the nation. Was it an isolated incident? Was the fire intentional? Should the people from other faiths also be on alert? Should any person opposing abortion be concerned for their safety and that of their families?

Univision’s news audience also missed the official reactions of Fairfax County authorities, as announced in a press release from the county’s Board of Directors: “We continue to have increased patrols at places of worship, connect with community faith leaders, and are working with our regional law enforcement partners to determine who is responsible.”

That’s how the pro-abortion bias goes at the leading Spanish-speaking news networks, aided and abetted by advertisers like Advil. Call them out here.