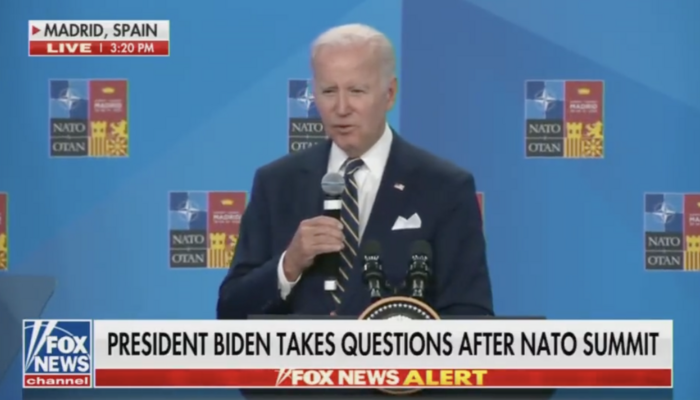 President Sleepy Joe Biden is pissed off that the Supreme Court overturned Roe v. Wade. Baby killing is an integral part of his day-to-day concerns as the Catholic man of faith he claims to be. 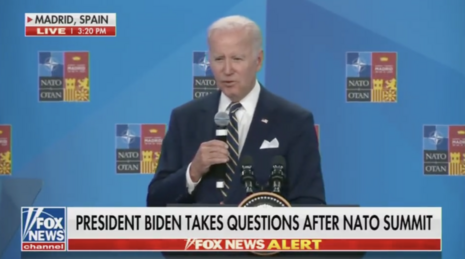 During the Q&A portion of Friday’s speech at the NATO summit, Biden touted support for temporarily suspending the filibuster in order to pass legislation that would legalize abortions nationwide. Talk about a dictatorship!

“The first and foremost thing we should do, is make it clear how outrageous this decision was and how much it impacts – not just on a woman’s right to choose, which is a critical, critical piece – but on privacy generally,” Biden said.

“I believe we have to codify Roe v. Wade in the law, and the way to do that is to make sure the Congress votes to do that,” he said through his jabber. “And if the filibuster gets in the way, it’s like voting rights, it should be we provide an exception for this … the required exception of filibuster for this action.”

Changing the filibuster would permit our dictators – er, sorry — our abortion supporting leglislation to pass laws through the chamber with only 51 votes instead of the usual 60 needed. So less people would have to agree for the bill in consideration to still advance.

Back in February senate republicans and Sen Joe Manchin (D-WV) voted against a democrat bill that would essentially outrule every pro-life law in America and legalize aborions up to birth. The radical bill passed in the house but, due to the requirements of the filibuster, failed to make it through the senate.

The decision to reverse Roe that came out last week and pushes abortion decisions back to individual states. Truthfully it presents a more democratic method for decision making. Biden called the decision to overturn Roe “outrageous” during his press conference.

States now have authority to discern on the abortion issue but Biden is looking to undermine local states to get his way. I guess if you can’t win the game under the current rules, just change them.

Biden is essentially saying that if he doesn’t get his way, he will defy the constitution to get what he wants.

1st, Congress d/n/have the power to do this.
2d, Manchin won’t agree to this pie-in-the-sky talk.
3d, even if 1&2 were incorrect, Ds will rue the day they said abortion policy in all 50 states can be dictated by feds. What happens when GOP regains control? https://t.co/GVGAoN1zYT

So I guess now, if we don’t like certain laws, we can just decide to change the requirements to change those laws in order to pass what we like.

Kudos on the stamina tho Joe. Evil never quits.