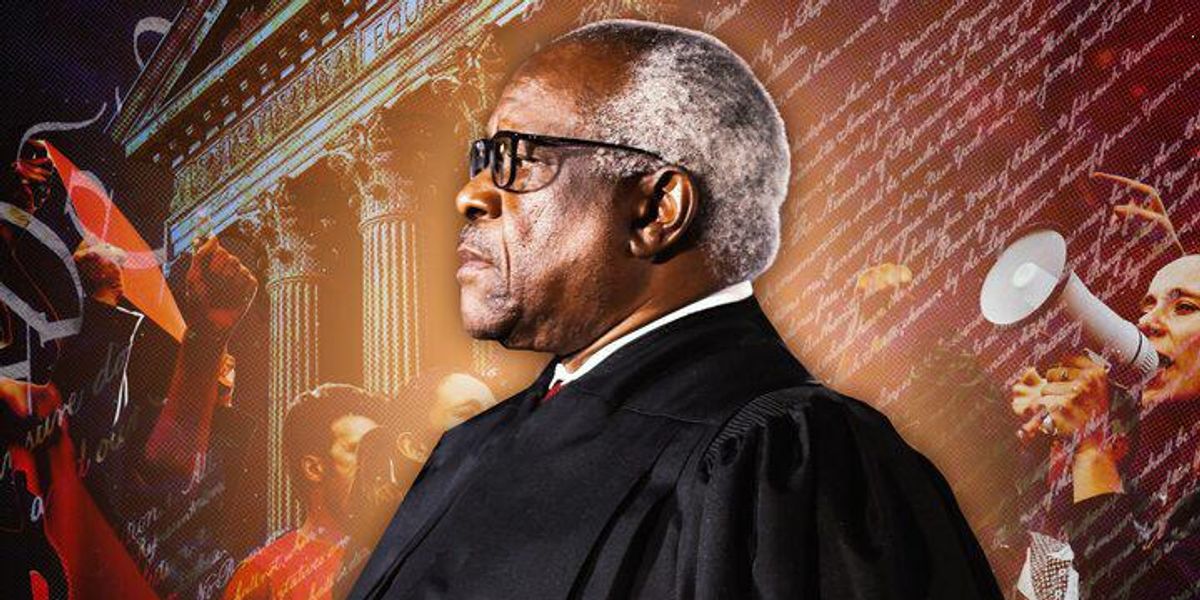 Justice Clarence Thomas has been the target of vicious attacks from politicians and celebrities since Roe v. Wade was overturned last week.

Samuel L. Jackson referred to him as “Uncle Clarence,” and Chicago Mayor Lori Lightfoot yelled “F*** Clarence Thomas” at a recent Pride event. Hillary Clinton described him as a bitter and angry man, and random Twitter users have been calling him “n****r” with impunity.

None of this is surprising – or new. Clarence Thomas is frequently attacked by Democrats because he is the most conservative justice on the Supreme Court. His jurisprudence often stands in the way of their political agenda, especially when it comes to the issue of abortion.

That said, he is more than an ideological contrarian. He is an intellectual leader in the mold of Frederick Douglass and Booker T. Washington. All three men cared about the condition of black people in America and fought in their own ways for racial equality.

I have often described our current state of race relations as a symbiotic relationship between white liberals seeking absolution for sins they didn’t commit and black liberals seeking empathy for injustices they didn’t endure. Both groups hate Clarence Thomas because his life and legal writings expose their dirty little secret: The racial equality both groups say they are fighting for will never be achieved as long as black people are held to completely different standards of behavior and performance than others.

The actions of a white murder suspect are never attributed to his neighborhood, quality of schools, or broader economic forces, especially if his crimes are racially motivated. He receives no sympathy for his neo-Nazi ties just because he was raised to hate by an entire family of bigots. The same goes for other personal failings, whether they be poor academic performance or chaotic family life. He is judged as an individual for the crimes he commits. None of his social pathologies are explained in systemic, institutional, or environmental terms in the pages of the New York Times or the Atlantic.

Liberalism takes a much different approach when the main characters are more melanated. According to the left, virtually every negative social and economic outcome for black people is caused by some combination of white supremacy and government policy. A black gangbanger can be turned into a sympathetic figure when the pen writing his story is in the right hands.

The fact that homicide is the leading cause of death for young black men is attributed to redlining and inadequate school funding, as if poor black people have no choice but to shoot one another when they live in close proximity or don’t score 1600 on the SAT.

The notion that people of African descent are incapable of moral reasoning or emotional self-regulation was as common among slave owners in the antebellum South as it is today among NPR listeners – both white and black – on the Upper West Side. The former argued the issue was genetic. The latter believe it’s systemic. Both are driven by a self-aggrandizing mix of contempt and condescension.

Justice Thomas rejects this way of thinking, largely because he understands that a man without responsibility for anything in his life is no man at all. The only people in society allowed such an exemption are the young, the elderly, and the infirm. His dissenting opinion in the Grutter v. Bollinger affirmative action case begins by quoting Frederick Douglass’ response to abolitionists who wanted to know what should be done with free black people after emancipation.

The American people have always been anxious to know what they shall do with us. … I have had but one answer from the beginning. Do nothing with us! Your doing with us has already played the mischief with us. Do nothing with us! If the apples will not remain on the tree of their own strength, if they are worm-eaten at the core, if they are early ripe and disposed to fall, let them fall! … And if the negro cannot stand on his own legs, let him fall also. All I ask is, give him a chance to stand on his own legs! Let him alone! … Your interference is doing him positive injury.

Justice Thomas went on to affirm that he believes black people could “achieve in every avenue of American life without the meddling of university administrators.” He actually views black Americans as equal citizens made by the same Creator and endowed with the same rights – and responsibilities – as every other American, not a lesser client class in need of protection by benevolent racial allies.

One of the most under-discussed phenomena regarding the dissolution of the black family is its impact on self-image. The primary role of a father is to protect and provide for his family. That has been true since the beginning of time. Fathers also provide affirmation, and that intense desire to be told your life has value can be heard every time a black activist, pastor, politician, athlete, or journalist demands that a white person say “black lives matter.” Getting white people to submit to this type of ethnic extortion may feel empowering to the black radical as he raises a clenched fist in victory, but bigger government and better white people will never fill that void or convince him his life actually matters.

How can people complain about racist dog whistles while supporting artists who have been blasting messages of death, destruction, and degradation in their own communities for decades?

Why does a dispute between a white woman and a black bird-watcher in Central Park receive more national media coverage than the hundreds of black schoolchildren being shot and killed in their own neighborhoods each year?

Liberals who prioritize the thoughts, words, and actions of white people over those of black people believe in social hierarchy, not equality. Clarence Thomas is a living, breathing repudiation of this worldview.

I spoke briefly with Justice Thomas and expressed my respect and admiration for his work. I also told him I could not understand how someone who clearly believes that black people are fully capable of competing in every area of American social life could be viewed as a race traitor.

In many ways, the attacks on Justice Thomas are aimed at everyone who attended that conference. The viciousness of the insults is a signal to other black commentators, politicians, academics, and celebrities who have the nerve to take a position out of step with leftist orthodoxy.

The ultimate goal is to stifle speech and coerce conformity. Most black people would rather keep their opinions to themselves than be publicly skewered as sellouts. Clarence Thomas has dealt with these attacks for over 30 years. The man I met stood tall regardless of who he engaged. I didn’t sense the slightest curvature in his vertebrae.

In addition to his legal legacy and political impact, I predict Clarence Thomas will ultimately be remembered for fighting to conserve that which black and white liberals have conspired to steal from the black masses for decades: our dignity.