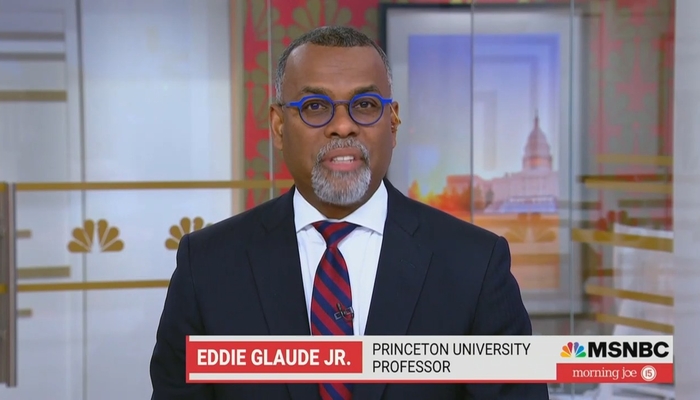 Nothing about Roe v. Wade, and nothing about the problems that are pummeling Americans at full force. For Thursday’s Morning Joe edition, it was back to politics’ newest thriller/drama: The January 6 Committee and gushing about Wyoming Congresswoman Liz Cheney’s (R) speech at the Reagan Library where she called on Republicans to no longer be loyal to Trump, but to the Constitution.

A perplexed Mika Brzezinski asked her husband and co-host Joe Scarborough, “is it too late for that choice? For the Republican Party?” When Scarborough spoke, he once again tied religion into his “answer.” “You know me,” he started, “I’m a Baptist.”

He continued on to say that he always believes “in deathbed conversions,” and will “take anything.” However, the Lord will show the Republican Party no mercy in Pastor Joe’s eyes, as he thinks it’s “too late for this Republican Party.”

Filled with self-righteousness, Scarborough condemned “the base” of the Republican Party. These are the people who “are chasing around these conspiracy theories” of the pandemic, “Jewish space lasers,” and “the Italian dude that’s stealing the election.”

The “Baptist” then went on to say that Georgia “picked so many freaks, and weirdos, and insurrectionists in their primaries,” and that the only way the party can be reformed is if “they get beaten.”

So that must mean that in Joe’s Bible, mercy is conditional. And very exclusive. Just like Jesus taught. Not.

The buck did not stop there. Princeton University Professor Eddie Glaude Jr. added some of his own fuel stash (in this economy) to the fire by saying that the Republican Party “needs to literally be burned to the ground,” even though he also believes in “deathbed conversions.”

However, that sounded too extreme for anti-GOP Scarborough, because he was stuttering while trying to calm the flames before they got out of control.

Is Scarborough afraid of the GOP for coming after his show for this hypocrisy, when he condemns violence?

Glaude seemed to finally calm down, talking about where Reaganism stands in the country, and how it seems that “cynical pursuit of power” and “culture wars” are the only defining pillars of the Republican Party.

The tolerant, peace-loving left will take these anti-GOP fighting words with a grain of salt, and no one will come under fire, as always.

This example of the leftist media turning a blind eye was proudly made possible by Breyers and Toyota.

Click “expand” to read the full transcript of this segment.

MIKA BRZEZINSKI: Well I guess my question to you, Joe, is it too late for that choice? For the Republican Party?

JOE SCARBOROUGH: Listen, listen, you know me. Like my friend Eddie, we’ve talked about this. I’m a Baptist.

BRZEZINSKI: You’re into the—

BRZEZINSKI: Can it be saved?

SCARBOROUGH: It’s too late for this Republican Party. And you can look at the leaders, but as somebody earlier this week said on the show, it’s not the leaders as much as it is the base.

So, yeah, I think it is too late for this Republican Party. I think they may do well in the midterm elections, I’m not so sure. If you look at a Georgia poll because they picked so many freaks, and weirdos, and insurrectionists in their primaries, but I think in the long run, the only way they get reformed is they get beaten.

EDDIE GLAUDE JR.: I think you’re absolutely right, Joe. I think it needs to literally be burned to the ground. I don’t want to use that — I know that verb is kind of strong.

SCARBOROUGH: Not— not– not literally. Hol—hold on let me help me help you out here—not literally–

SCARBOROUGH: In the political sense. Right?

GLAUDE JR.: In a political sense, ri—right, absolutely, absolutely. I think I want to make– I want to expand it a little bit too, Joe. I think there’s this– we have to ask ourselves the question, because Liz Cheney delivers this talk at the Reagan Library and we have to ask ourselves the question: “what is, in some ways, the status of the ideology of Reaganism?”

Have we experienced over the last few years, over the last decade or so, a sense of which Reaganism has revealed itself as in some ways bankrupt? And what we have instead of those principles that Liz Cheney laid out that define our conservatism, this kind of grievance, the culture wars as the substance of a kind of Republican ideology alongside of a kind of cynical pursuit of power.

The FBI Needs to Raid Barack Obama’s Home Next. Here’s Why.
MSNBC cancels shows of Zerlina Maxwell and Ayman Mohyeldin streaming on Peacock
We have updates about the Trump raid and guest Kari Lake
Is This Trump’s Moment to Officially Announce His 2024 Candidacy?
Guess who’s back? NASA preparing return to the moon