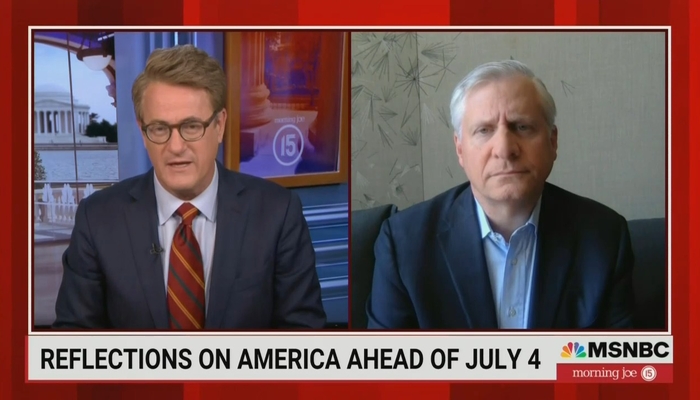 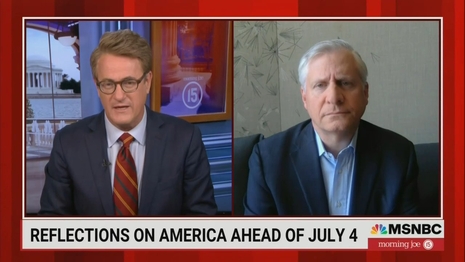 Going into the Fourth of July weekend on Friday, MSNBC host Joe Scarborough ended the 8 O’clock hour with an interview with presidential historian Jon Meacham where the duo went on to pompously and hypocritically wax poetic about the state of the country and how we should reflect on the situation we’re in regarding the January 6 hearings. And according to these two, we’re facing down the same dark forces that got humanity expelled from the Garden of Eden.

Teeing up Meacham to tell a story about “what being a patriot is really all about,” Scarborough cited how “A lot of people talking, obviously, over the past few days about Cassidy Hutchison and her testimony on January 6 committee. Reminds me of something that you speak a great deal about. And that is something that happened I believe on June the 1st 1950, with a certain female senator from Maine.”

The senator he was hinting at was Republican Margaret Chase Smith and how she spoke out against Senator Joseph McCarthy (R-WI). Meacham praised her “speech titled ‘The Declaration of Conscience,’ in which she said we can disagree about the goals of policy but we should not question each other’s motives.” “We cannot be un-American in that way,” he paraphrased of her criticism of McCarthy.

For all his pontificating, Meacham, himself doesn’t live up to that ideal. In 2019, he said then-President Trump had a “totalitarian mindset.” And in 2020, he said Trump was dumber than his dogs.

Even though Hutchison may have lied under oath about Trump supposedly grabbing the steering wheel of his limo, Scarborough took the opportunity to praise her and Rep. Liz Cheney (R-WY) and hold them up as braver than then-President Dwight Eisenhower:

And like you said, actively went into the speech, took out a part that would have condemned McCarthyism. Just didn’t have the courage to do it. Just like so many people haven’t had the courage to cross Donald Trump. But once again, you have a strong woman here. You have Liz Cheney and again Margaret Chase Smith.

Things started getting biblical when Meacham started opining about how what we’ve been dealing with since the Trump years was the “perennial” “manifestation of the darkest forces in American life,” the same ones that “start in the Garden of Eden.” “It’s the will to power. It’s the putting of your own ambition and appetite ahead of anything else,” he said.

The preaching continued with Meacham invoking Scarborough and his religious upbringing and how we’re all sinners with the capacity for good:

You grew up in Southern Baptist tradition. I grew up in a Southern Episcopalian tradition. We know that we are sinful. And because a democracy is the fullest manifestation of all of us, then country is going to be sinful too. And the reason you have the rule of law, the reason you have commandments is to try to do better. And if you don’t assent, if you don’t agree to win by the rules or lose by the rules, then the entire enterprise collapses.

And he went on to argue that for all the faults of or Founding Fathers, specifically Thomas Jefferson, he was still “the man that wrote the words that have freed more people than any other political document in the history of humankind.”

Unfortunately, that kind of nuance and ability to forgive was beyond Scarborough. Just 24 hours earlier, he was busy declaring the Republican Party was locked out of “deathbed conversions.”

This ridiculous opining was made possible because of lucrative sponsorships from Liberty Mutual and Purple. Their contact information is linked.

Serena Williams Complains About Retiring To ‘Expand Family’
Indiana Republican Who Was Born In The USSR Blasts FBI Trump Raid As ‘KGB-Style Tactics’
Elite all-girls school in Nashville may soon accept biological males: ‘Any student who identifies as a girl may apply’
Evidence confirms that TWA Flight 800 was shot down by the U.S. military, followed by a massive coordinated cover-up
Dems Upset, Trump Raid Disrupted ‘Great Legislation of Joe Biden’