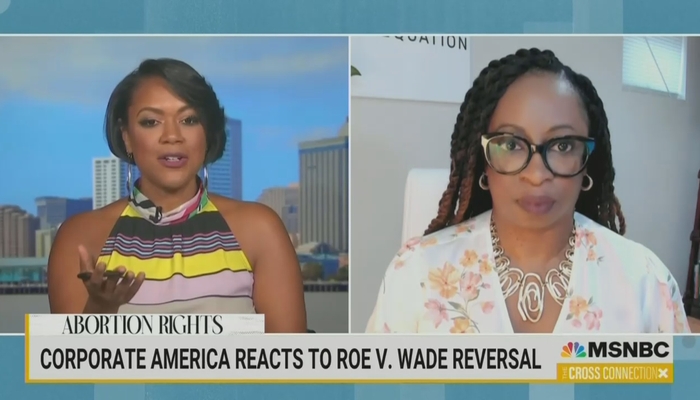 That is the sick, twisted metaphor of MSNBC’s Tiffany Cross.

On her Cross Connection show Saturday morning, Cross condemned companies that on the one hand are offering to pay for their employees’ travel to states where abortion is legal, but on the other hand, contribute to politicians who are pro-life.

“You can’t dance with the Devil and the Lord at the same time.”

Cross singled out AT&T, citing an Insider article reporting that it is the largest contributor to pro-life politicians among companies also paying for their employees’ abortion travel.

Cross apparently doesn’t understand that, much as she might like them to be, businesses are not liberal-activist non-profits. They’re in business of maximizing value for shareholders. As AT&T was quoted in that Insider article [emphasis added]:

“No contributions were made on the basis of an official’s position on abortion . . . Our employee PACs contribute to both parties and focus on policies and regulations that are important to investing in broadband networks and hiring, developing, and retaining a skilled workforce with competitive wages and benefits.”

Got that? AT&T’s PACS contribute to politicians who support “policies and regulations” in line with AT&T’s business interests! AT&T also pointed out that, in fact, more of its contributions have gone to politicians supporting abortion rights than to pro-life politicians. 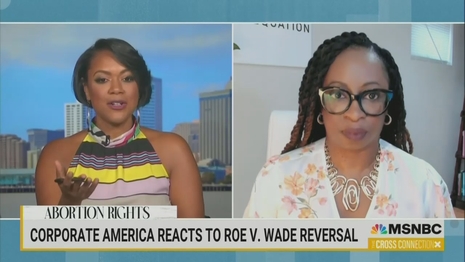 But that doesn’t satisfy Cross: she demands a pro-abortion litmus test for corporate political donations! The Left insists on Full Wokeness.

The guest for the segment, Sacha Thompson, founder and CEO of a “diversity-consultancy” firm, agreed “absolutely” with Cross’s dancing with the Devil, dancing with the Lord take. Thompson was quoted in the Insider article as saying [emphasis added]:

“AT&T’s political donations are problematic. Donations to politicians in favor of abortion rights does not negate the $1.2 million that was given in support of anti-choice lawmakers.”

In fact, it would be corporate malpractice for businesses to donate to politicians on the basis of their adherence to liberal policy positions, rather than their views on the issues important to corporate success.

But in the leftist mindset, there is no difference between non-profit liberal advocacy organizations, and for-profit businesses. They all must work to further the liberal cause!

On her MSNBC show, Tiffany Cross saying, “you can’t dance with the Devil and the Lord at the same time” in condemning companies that contribute to pro-life politicians while also paying for employees’ abortion travel, was sponsored in part by ASPCA.

TIFFANY CROSS: As the country begins to grapple with the realities Roe v. Wade being overturned, some companies have seemed to be stepping up. AT&T, Disney, Microsoft, and Amazon are all among those who have publicly pledged to cover their employees’ travel expenses so that they can access abortions uninhibited.

But, all four companies have also donated to supporters of state abortion bans, the very laws that will make such travel necessary. That’s according to reporting by Insider and Bloomberg, which NBC news has not yet independently verified.

But according to Insider, AT&T actually tops this list, with more than $1 million to anti-abortion lawmakers behind trigger laws in 13 states.

Now, we did reach out to all four companies. None responded except for Microsoft, which provided a statement that reads in part, “Microsoft will continue to do everything we can under the law to support our employees in accessing critical health care.” Microsoft did not respond to our question about contributions to anti-abortion law makers.

Joining me now is Sacha Thompson, she’s the CEO and founder of The Equity Equation. And Sacha, so happy to have you here. I really want to get into this, because AT&T plans to continue provide financial support for employees who have to travel. However, we just said they’re a part of the largest publicly-traded corporate funder of politicians supporting these laws. so, I’m just curious: what role does the private sector play in even creating this landscape, and what’s their responsibility in fixing it? Because you can’t dance with the Devil and the Lord at the same time.

SACHA THOMPSON: Absolutely. So, thank you so much for having me, Tiffany. You know, this is something that really has come to the forefront in the last few years, right? Prior to the summer of 2022, sorry, 2020, companies weren’t making these types of statements. And so they’re now feeling like they have to step up. They have to say something. So that part of this is new. The giving to political campaigns is not. That has always been happening. And I think we’re now at a time where employees and customers, and clients, are asking for more transparency. And so, that’s how we’re starting to see both sides at this coin being played. We’re starting to see, okay, wait a minute, you can’t say one thing here, and then act another way. And so, we’re starting to have this reconciliation that’s taking place in corporate spaces.

CBS censors its own revealing report noting that only a fraction of U.S. military funding to Ukraine makes it to frontline troops
Using the Nuclear Pretext to Attack President Donald Trump Is Blown Up
Libs of TikTok exposed Palm Springs drag show where young child danced for money — drag queen called reaction ‘homophobic’ and immoral
White House touts ‘Big news’ that the national average price for a gallon of gas has fallen below $4 per gallon
‘It’s a turkey, not a tiger!’ Bodycam footage shows police response to wild break-in call