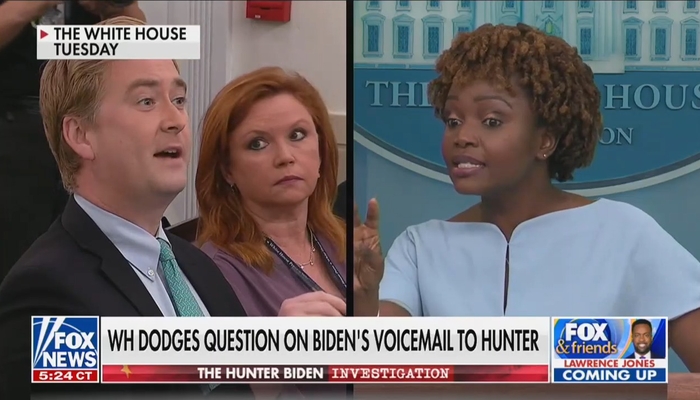 Holding her first press briefing since June 22, White House Press Secretary Karine Jean-Pierre showed Tuesday that she hadn’t improved since her cringeworthy opening months in the top post. As part of that, she flailed when grilled by Fox’s Peter Doocy and Real Clear Politics’ Philip Wegmann over a 2018 voicemail from Hunter Biden’s laptop allegedly showing Joe Biden discussed business ventures with his son.

As NewsBusters has reported, the liberal broadcast networks have completely ignored this bombshell.

Jean-Pierre replied that Biden’s position “stands,” but Doocy wasn’t having it. In turn, Jean-Pierre shut down and insisted she wouldn’t “talk about alleged materials from the laptop” in any capacity (click “expand”):

DOOCY: — and it says, “I think you’re clear.” How is that not him talking to his son about his overseas business dealings?

JEAN-PIERRE: We’re not — from this podium, I am not going to talk about alleged materials from the laptop. I will —

DOOCY: So are you disputing —

DOOCY: — that it’s President’s voice on the voicemail?

JEAN-PIERRE: — I am not going to talk about alleged materials on a laptop. It’s not happening.

When Doocy tried to ask again whether this meant she was disputing the authenticity of the voicemail, Jean-Pierre again closed up shop by telling him to speak with Hunter’s “representative.”

As for Wegmann, he began with the fact that President Biden has routinely promised he “will always level with” the American people, but he hasn’t shown that when it comes to matters involving Hunter Biden. 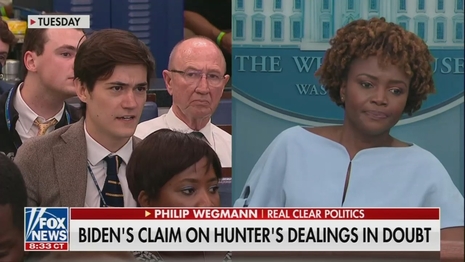 Wegmann told Jean-Pierre that “you seemed to dismiss Peter’s question” and, with that in mind, he wanted to know “[h]ow” such deflection would be “consistent with the President’s promise to always level with the American public.”

After emphasizing the President’s past denials, Wegmann argued “it certainly seems like he was seeking to do exactly that — have a conversation about these business dealings” and thus worth answering whether he’d be straight “with the American public on this.”

Again, Jean-Pierre wanted nothing to do with this, saying that she “cannot comment on any materials from the laptop” from the White House podium “and I would refer you to the representatives of Hunter Biden.”

Prior to his question about Hunter Biden, Doocy asked Jean-Pierre about the ever-shifting blame game from the White House on inflation and high gas prices:

How did the President go from blaming high gas prices on Putin to Big Oil to small-business owners now?

Jeff Bezos says the President’s tweet about this is “either straight ahead misdirection or a deep misunderstanding of basic market dynamics.” Which is it?

Wegmann had another question of his own that Jean-Pierre was unsurprisingly not able to answer concerning a Reuters report “that more than five million barrels of oil that were released from the emergency oil reserves were exported to Europe and Asia last month, and some of it, reportedly, was actually heading to China.”

Elsewhere, Today News Africa’s Simon Ateba drew a spicy reaction from Jean-Pierre when he called out the double standard between President Biden going to the beach as Supreme Court justices were facing death threats and “President Trump watching TV, even pleading to go to the Capitol while” it “was being attacked” (click “expand”):

ATEBA: I would like to know what’s the difference between President Trump watching         TV, even pleading to go to the Capitol while — while the Capitol was being attacked, and President Biden going to the beach and having fun while Supreme Court justices are on the attack by a verbally violent mob? What’s the difference between those two leaders?

JEAN-PIERRE: Wait, what’s the comparison you’re making? Could you say the first part?

JEAN-PIERRE: Well, I — there are two major differences here. First of all, our predecessor was very — we have said that his behavior on that day, on January 6th, was atrocious. The President has said that.  And we are going to let the Select Committee — the January 6 Select Committee continue to do their independent review of that — their hearing And you guys all saw for yourselves, the American people saw — have seen for themselves what — what the — what our precede- — predecessor has done — his behavior and his involvement, So that is not the same. That is absolutely not the same. We are talking about what we saw on January 6th. We are talking about an attack on our democracy. We are talking about a very dark day that the person who was here before us seemingly, if you watch, was very involved, so that’s very, very different. Now, fast forward to — to this President. This President is fighting for women’s rights. He’s fighting for women’s freedom. He has spoken out. He’s been very clear about what needs to happen next. He put out two executive authorities that lays out ways that we can protect women. He has — he has said that he’s go- — everything is on the table. We’re going to see what else we can do. But he also has spoken very truthfully and very honestly with the American people, which is: If we want to see Roe become the law of the land, we also have to act. We have to hold Congress accountable and make sure that they act and that that cannot happen. Then Americans need to go to the ballot box and that is — that is very different and to say — and to say that there is no difference, that is — that is just unbelievably wrong.

ATEBA: But is it a concern that a Supreme Court justice may be harmed?

To see the relevant transcript from July 5’s briefing (including American Urban Radio Network’s Ebony McMorris calling for the regulation of “military-style ammunition” and pleas from NPR’s Scott Detrow, freelancer Brian Karem, and The Washington Post’s Ashley Parker to address the “frustration” from liberals at the White House), click here.