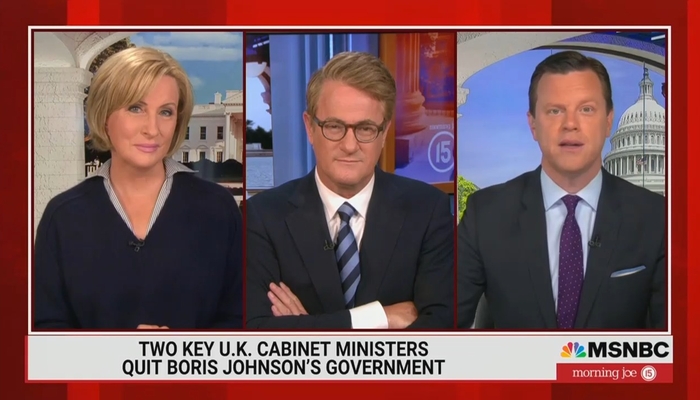 Morning Joe took some time on Wednesday to talk about the “scandal” surrounding British Prime Minister Boris Johnson regarding his parties during COVID lockdowns and almost, almost had a rational response before Willie Geist had to remind them that they work at MSNBC, thus January 6 was introduced.

Mika Brzezinski pointed out that “the Health Secretary and Finance Minister resigned within minutes of each other saying they no longer have confidence in Johnson’s leadership.” Many other officials have also called for his resignation.

This was a point she focused on despite the fact Johnson had already survived a confidence vote in Parliament.

After Brzezinski summed up the dilemma in Britain, main host Joe Scarborough had his own opinion to bring up. “I mean, yeah,” he started, “he had a party,” clearly shrugging off the events, “must be nice to have that as your greatest national scandal.”

And of course, Mika brought former President Trump into the mix by adding that he “had like several super spreaders,” with Joe adding that “he bragged about it.”

However, there was a once-in-a-blue moon moment where Joe actually wanted to make a fair comparison to Johnson’s situation. He recalled California Governor Gavin Newsom (D) and how he went “to the swanky restaurant in San Francisco” The French Laundry. Joe just put it plainly: “He went to it, got knocked around a little bit, and everybody moved on.”

He even called out the Brits by saying how unbelievable it is that they are all up in arms because their prime minister “had some party.” “I’m not saying it’s not bad,” Joe clarified, “it’s bad, but this is like six months, a year later? I mean, have a sip of tea and move on.”

Now, the phrase “have a sip of tea and move on” is so ironic for Scarborough and friends to say considering the things they freak out over. It is almost laughable to hear it come from the liberal media.

The Newsom example Joe gave was actually fair, and the fact that his fellow hosts agreed was even better. Does this mean that MSNBC is shifting to a more reasonable approach? Nope. That’s all thanks to Willie Geist.

Just when Morning Joe was so close to being spot-on, Geist decided to ruin it by steering to the left—no pun intended.

“Well, I think what you’re getting at is by comparison, our former President staged an attempted coup against the United States government—,” Geist pointing out the “Trump-endorsed insurrection” with Scarborough and Brzezinski agreeing.

Geist did say that the Brits calling for Johnson’s resignation over miniscule lockdown parties compared to what is going on in America “seems like small potatoes.”

But that got the bias ball rolling once again with Scarborough declaring: “Let’s compare. Attempted fascists overthrow of the federal government of the duly elected president.”

Brzezinski added: “Trying to change the votes.” Then both of them added in “COVID party,” and “shaking people down.”

They were so close to giving a fair assessment but they were back to their old and obnoxious tricks when all was said and done. Good going, Geist.

Swinging back to the bias was proudly made possible by Etsy and Liberty Mutual.

BRZEZINSKI: After two of his most senior cabinet ministers called quits, they quit. Both the Health Secretary and Finance Minister resigned within minutes of each other saying they no longer have confidence in Johnson’s leadership. Several other Tory lawmakers have made public statements demanding that he quit, an official close to Johnson said the Prime Minister will not quit.

Instead, he quickly appointed his education secretary as treasury chief. The resignations stem from a series of scandals notably over parties held at 10 Downing Street during COVID-19.

BRZEZINSKI: He’s got a lot of –

SCARBOROUGH: I mean, yeah, he had a party. Like on the roof at 10 Downing Street and their– the entire government is still rocked by this. I—I–

SCARBOROUGH: Must be nice to have that as your greatest national scandal.

BRZEZINSKI: Well, people know the difference between right and wrong, apparently over there.

SCARBOROUGH: Well, I mean yeah, you can know the difference between right and wrong but, but I mean my gosh.

BRZEZINSKI: I think Trump had like several super spreaders.

SCARBOROUGH: Yeah, well Tru—yeah but he– he bragged about it. I think—I think the parallel here, Willie, would be Gavin Newsom going to the swanky restaurant in San Francisco. He went to it, got knocked around a little bit, and everybody moved on.

But, again, they’re—they’re talking about—I mean– this is being the great political scandal because he had some party. I’m not saying it’s not bad, it’s bad, but this is like six months, a year later? I mean, have a sip of tea and move on.

WILLIE GEIST: Well, I think what you’re getting at is by comparison, our former President staged an attempted coup against the United States government—

GEIST: and tried to have the results of the 2020 election thrown out—

GEIST: so it does seem quaint by comparison. But yes, a lot Brits were upset about this because they had to stay locked in their homes, they couldn’t leave, they couldn’t see their family members, et cetera, et cetera. But you’re right to see the— effectively the government collapsing and calls—

GEIST: for the Prime Minister to resign by comparison to what we’re seeing here is–seems like small potatoes.

BRZEZINSKI: Trying to change the votes.

SCARBOROUGH: And a COVID party.

‘Banana Republic’: DeSantis and other conservatives sound off after Trump says the FBI raided his Mar-A-Lago home
Introducing MyCoffee From The Man With Legendary Energy — Mike Lindell!
Animal shelters nationwide report an increase in pet surrenders due to higher cost of living
CNN, CNBC and AP heads met with CCP propaganda group to “malignly influence” American politics
Libs of TikTok and Matt Walsh alert DEA about transgender individual who openly discussed an effort to give away prescription hormones