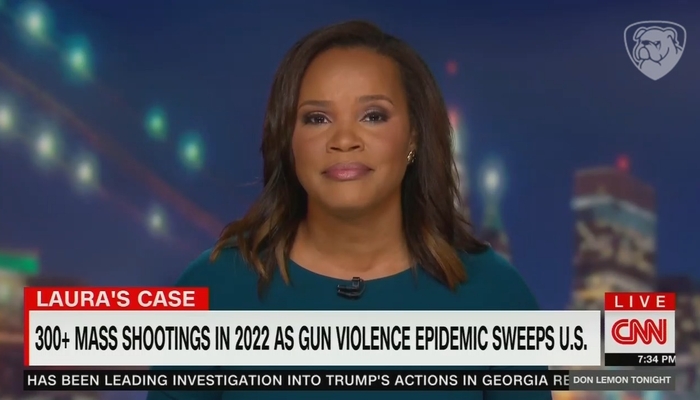 ‘Land of the Free and Home of the Brave?’ According to CNN fill-in host Laura Coates on Tuesday’s Don Lemon Tonight, it’s not so. “Because even on the day that we celebrated our nation’s independence… that was still not free from the terror of a mass shooting,” she proclaimed as she tried to whip the audience into a hysteria.

Coming from the Fourth of July holiday weekend with a shooting in Highland Park, Illinois, Coates states, “I remember when I first took my kids to watch the fireworks… we were watching our kids watch them… now when we go out, our heads are on swivels, assessing the continuous threat that is as unpredictable as it is everywhere.”

What else was hard to hear? How Coates encouraged the rage of fear throughout the audience in which the stand-in host detailed a purported conversation she had with her husband about backup plans and meeting spots if there was an active shooter at the neighborhood’s fireworks display.

“The agreement not to go back for one another and just get the kids to safety, maybe the hope that our children will remember to run if we, ourselves, are hurt,” she explained. Continuing to say, “all of this planning, all of these thoughts because of pervasive, frequent, unrelenting gun violence.”

As she pushed her personal overly concerned thoughts and phobias on the audience, Coates also introduced fabricated data from the anti-gun rights Gun Violence Archive to back up her opinions stating that “there have been 319 mass shootings just this year and 17 in the first four days of July.”

With those numbers, anyone would be scared; these numbers were created to push an agenda of fear in the nation, one that might lead to the end of the Second Amendment. When looking into real data, a different story is told.

A rise in guns over the past few years leading to more and more shootings? In a recent NewsBusters Blog, the founder of The Reload, Stephen Gutowski, stated that “most of gun recovered weren’t sold in the last two years.”

Why is the number so high?

James Alan Fox of Northeastern University, a credible and experienced mass kissing researcher for over 40 years, explained of the GVA’s data: “The kind of shootings that people really think about the public massacres – on average, there are about a half-dozen a year. In 2018, there were 10. And in 2019, I believe there were nine … in a population of 330 million people, you certainly can’t call the actions of 9 or 10 people an epidemic. It’s still a rare event.”

Thus, “people get the exaggerated view of the risk.”

This, of course, is evident in Coates’s rant.

This segment is sponsored by Starbucks and Southwest. Their contact information is linked.

LAURA COATES: Remember those days when going out just came down to figuring out if you wanted to deal with the hassle of being in public? Maybe the only kinds of questions you asked yourself were, do I feel like dealing with a crowd or looking for parking? I mean you expect some headache. Its part of the price you pay to make the memories, I guess.

But now millions of people are dealing with the reality that we have come to expect gun violence when we go out, or at least the potential for that gun violence. And frankly, it’s affecting the way that people even live their lives, the choices they make.

I can’t lie, it factors into my decisions about where to take my own children. It’s a struggle to not let the terror of it all win, to not have to revisit the plan that my husband and I had to lay out in case of an emergency. Which parent will take which child? What’s the meeting spot in case we’re separated? The agreement not to go back for one another and just get the kids to safety, maybe the hope that our children will remember to run if we, ourselves, are hurt. All of this planning, all of these thoughts because of pervasive, frequent, unrelenting gun violence. I remember when I first took my kids to watch the fireworks, and none of us parents were watching the fireworks as they were. We were watching our kids watch them, just to try to see what the world looked like through their eyes.

And now when we go out, our heads are on swivels, assessing the continuous threat that is as unpredictable as it is everywhere.

And last night I watched my own kids watching the fireworks, and they were naive to the fact that, well, places of worship and, to some extent, schools and grocery stores and theaters and now parades, they were no longer immune.

And the great, tragic irony of it all was that even on the day that we celebrated our nation’s independence, the land of the free and the home of the brave, that was still not free from the terror of a mass shooting.

And what’s bursting in air only gives proof through the night that our national epidemic of gun violence is still very much here. And this, by the way, is with the new legislation. So, what now? When will we feel that freedom?

I want to bring in CNN political commentators Paul Begala and Alice Stewart.

And I had to tell you both, we’ve all had these conversations in the past as well, and we continue to have them about these ideas of how we live under this constant sword of Damocles.

And, Paul, I mean, listen to this. Look at this picture of a Lake County police officer. He’s in Highland Park. He’s holding his head in utter shock and despair. I mean there have been 319 mass shootings just this year and 17 in the first four days of July.

I mean you’re talking about parades, bars, a hospital, a grocery store. I mean the violence, as I’ve talked about, it’s like it’s fundamentally altering how we live our lives.