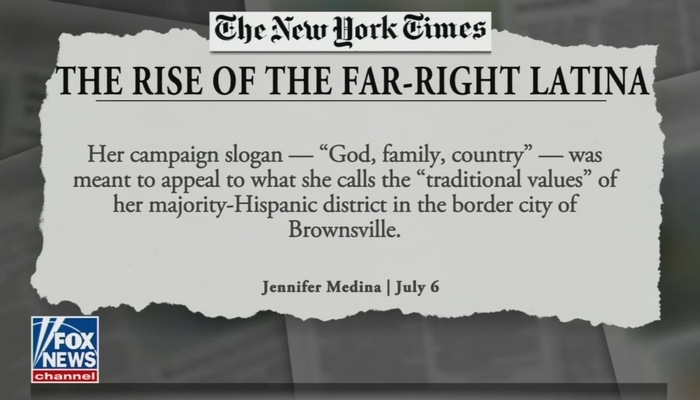 The purpose of yesterday’s disgusting New York Times hit job on Texas congressional candidates Cassy García, Mónica de la Cruz, and Congresswoman Mayra Flores (R-TX34), titled “The Rise of the Far-Right Latina”, was to signal them as race-traitors to the rest of the Acela Media, and have that as the frame of they are covered going forward. But such efforts are not likely to succeed.

Look at how national politics reporter Jennifer Medina characterizes Flores’ win in the TX-34 special election, and look at what is used in order to other Flores:

Representative Mayra Flores became only the second Republican to represent the Rio Grande Valley after she won a special election last month and flipped the congressional seat from blue to red. She also became the first Latina Republican ever sent by Texas to Congress. Her abbreviated term lasts only through the end of the year, and she is seen as a long shot to win re-election to a full one.

But what is most striking is that Ms. Flores won by shunning moderates, embracing the far right and wearing her support for Donald J. Trump on her sleeve — more Marjorie Taylor Greene than Kay Bailey Hutchison.

Her campaign slogan — “God, family, country” — was meant to appeal to what she calls the “traditional values” of her majority-Hispanic district in the border city of Brownsville. She called for President Biden’s impeachment. She tweeted QAnon hashtags. And she called the Democratic Party the “greatest threat America faces.”

In an interview in her still-barren office the day after her swearing-in ceremony, Ms. Flores was asked whether she considered Mr. Biden the legitimately elected president.

“He’s the worst president of the United States,” she said.

When asked three more times whether Mr. Biden had been legitimately elected, she repeated the same nonanswer.

Ms. Garcia, by contrast, said she has been a Republican her whole life. Raised conservative, she went to church three times a week and entered politics soon after college, working as the outreach director for Mr. Cruz in McAllen.

As a candidate, she has focused on religious liberty, school choice and abortion bans — issues on which she said the region’s Hispanic voters were increasingly like-minded.

Take notice of the things that are flagged for Times readers: adjacency to Trump (including a direct comparison to Georgia firebrand Marjorie Taylor Greene), the appeals to “God, family, country”, and policy specifics on abortion and school choice. These, in this order, are meant to represent to Times readers that the Texas Trio are well outside of the Hispanic mainstream (as imagined by the Times).

Because the Latino identity is primarily political (Mike Gonzalez’ scholarship on this is essential), any deviations from orthodoxy are considered race betrayals. The most obvious and obnoxious example of this happened in 2018, when Univision’s Jorge Ramos asked Beto O’Rourke whether Ted Cruz betrayed Latinos. O’Rourke, to his credit, refused the bait.

Consider also, as our friend Giancarlo Sopo noted, that there were no “rise of the far-left Latina” pieces written when Alexandria Ocasio-Cortez entered into national prominence. There was only elevation and star-making, because it is presumed that leftism is the default Latino political position.

The NYT piece creates a permission structure for the rest of the Acela Media and their customers to vilify and racially disqualify the Texas Trio, in a manner reminiscent of the vile treatment of Justice Clarence Thomas since the Dobbs ruling. But such efforts are likely to fail.

Univision and Telemundo, which have far greater reach in South Texas than The New York Times, made sure to run glowing “Latina Pride” stories when Flores won her special election. Immigrant success stories usually get top billing on these networks, and to hide the historic election to Congress of a woman born in Burgos, Tamaulipas, Mexico would have constituted a grave departure from their norms.

As the election heats up, you should expect more of these pieces to run in the Acela Media and on cable. But now you know why they run.

‘Asian pig’: 19-year-old female charged with hate crime; cops say she punched, kicked man for not giving up seat on NYC subway train, made anti-Asian statements
Is Trump Costing the GOP the Senate Seat in Georgia Again?
Video: Fugitive hiding under mattress opens fire on cops who were searching for him. It doesn’t end well for suspect.
FTX laundered money to Ukraine for biological weapons shelter funding
Actor Brad William Henke dies in his sleep at age 56