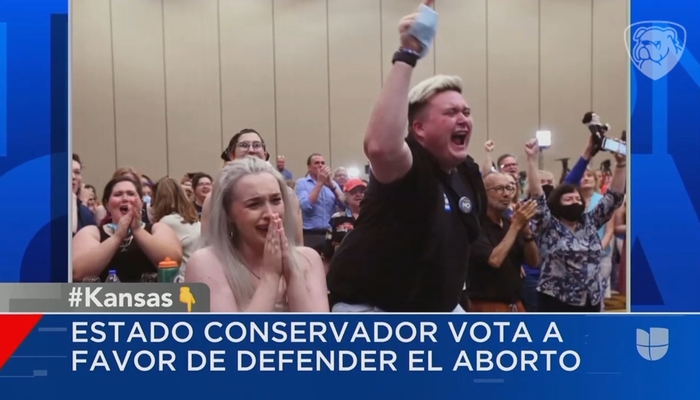 Univision’s report on the Kansas ballot initiative regarding abortion simultaneously managed to disinform viewers, promote a pro-abortion agenda, and undermine our democratic institutions. It is not surprising, then, that Hispanics continue to lose trust in corporate media.

Watch as Univision’s midday newscast needs no more than 30 seconds to make a hash of such things as basic facts and history:

CAROLINA SARASSA, UNIVISION: And speaking of abortion- Kansas, a deeply conservative state, voted in favor of defending the right to this procedure. We are talking about the first setback for the Supreme Court, which happens a month after the Court eliminated the right to an abortion throughout the country. Kansas, therefore, openly rejects a ballot initiative that would have allowed the state legislature, controlled by Republicans, to harden restrictions on abortion or simply ban them without exceptions.

After condemning Justice Samuel Alito’s opinion in Dobbs for sending abortion back to the states as an attack on democracy, the media (Univision included) take a triumphalist tone at Kansas’ choice on abortion. So, which is it?

But beyond that bit of dissonance, it is important to remember that this is Univision’s midday newscast, which is its own special circle of brain-rot Dantesque hell. One almost empathizes with anchor Carolina Sarassa, who in this cast has the unfortunate task of reading the garbage that chief newsroom editor Daniel Morcate puts on the teleprompter. Almost.

How, exactly, is the Kansas referendum a “setback for the Supreme Court” when the referendum is Dobbs’s intended outcome? Is Justice Alito on the ballot in Kansas?

Furthermore, no explanation is given with regard to the confusing ballot language, which was essentially a double negative and could’ve easily led a number of pro-lifers to believe that they were voting to ban abortion. Perhaps it was too much too much of an ask for a 30-second story framed to push a “conservatives love abortion” line.

Univision continues to carry water for the abortion lobby, and misrepresents the results of the Kansas referendum to its viewers. It is no wonder, then, that only 31 percent of Hispanics trust the media.

This pro-abortion propaganda was brought to you by Tide. Click here and let them know what you think.