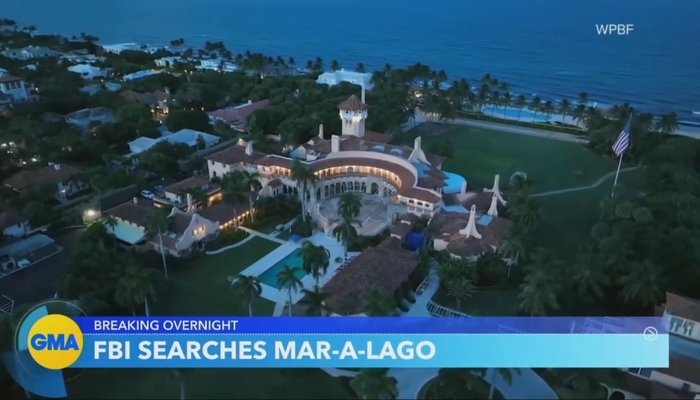 However, the liberal networks were surprisingly not ready to celebrate with ABC and CBS noting there’s been very little “transparency from the Justice Department or the FBI” and, if they had only sought boxes of presidential records, it would be correctly viewed as “overreach” by the Department of Justice (DOJ).

ABC’s Good Morning America co-host George Stephanopoulos called the raid “stunning” in a tease while chief Washington correspondent Jonathan Karl was even more direct: “This may be the most politically explosive raid ever undertaken by the FBI. It’s a stunning development.”

Speaking after Karl’s lead-off report to chief legal analyst (and NewsNation host) Dan Abrams, Stephanopoulos said viewers need to “kinda take a breath,” inviting him to walk everyone through the process so they understand what would have to happen for that FBI search to take place.”

After explaining how law enforcement (at any level) would go about getting a warrant, Stephanopoulos opened the door to skepticism:

We — we believe they took documents away from — from Mar-a-Lago. There are questions about mishandling of classified information. That, of course, is a crime. It could prevent the President from running again although that law is at issue but there has to be something more, right?

Abrams agreed, arguing that “there has to be something more than just a Presidential Records Act violation” with the DOJ and FBI “hav[ing] to know something that we don’t know about yet and I think that’s why it’s really important to pause here.”

He added that not only would it be a case of government “overreach” if it was only about “nothing more” than boxes of classified documents that shouldn’t have left the White House in January 2021, then “it would be a mistake on the part of the Justice Department.”

Over on CBS Mornings, co-host and Democratic Party donor Gayle King told chief investigative correspondent Catherine Herridge that the raid was “[s]omething that has not happened before in American history, so just take that in for just a second,” and the word “‘unprecedented’ gets used a lot, but searching a former President’s home really is an unprecedented move.”

Chief Washington correspondent Major Garrett served in Abrams’s spot on CBS to provide analysis and noted “what we don’t have is very much transparency from the Justice Department or the FBI” and instead “one statement from the former President[.]”

Garrett spoke in more dire terms than others on the broadcast networks, arguing that “this is a dangerous and unstable moment in American history” and that the reaction from “Trump supporters” to this raid could turn “combustible.”

He reiterated a few moments later that there’s still plenty we don’t know and that Trump himself could help by releasing the list the FBI had to have provided his counsel of what was taken (click “expand”):

GARRETT: We don’t know what the underlying facts are. We haven’t seen the affidavit. We haven’t seen the search warrant. And, as I understand it, because of this sensitivity, there would be a conversation between former President Trump’s lawyers on the scene about what was taken and why and a receipt given to the former President describing what federal authorities took and under what legal authorities. The President — the former President is in possession of that and could help explain to the public what happened. He could release that if he wanted to. So could the Justice Department. So could the FBI. What we lack here is real insight into the underlying justification for this search warrant, what it sought, and what the applicable laws that were possibly violated were. Until we know more about that, this feels deeply politicized, and the President is reveling in the atmosphere of victimhood, as he has many times before.

GARRETT: So we hear this said all the time, Gayle. The rule of law in our country matters and no one is above the law…[T]he country has this moment where it has to evaluate underlying evidence, and what the evidence is and what the possible crimes are, and without that, you have a very political atmosphere, one in which the former President currently has the upper hand.

NBC’s Today had the same aurora of caution, but they gave the Biden administration the longest leash. Co-host Savannah Guthrie announced in a tease:

The FBI descends on President Trump’s Mar-a-Lago home. An unprecedented move. Federal agents with a warrant reportedly tied to classified information taken from the white house. Trump from New York claiming Mar-a-Lago was under siege. Supporters gathering there in protest.

Longtime correspondent Kerry Sanders had little in the way of punditry or memorable notes (aside from a Trump supporter with a sign reading, “Fake News Is CNN”) aside from the end of his reports leading off each of the first two hours when he invoked Hillary Clinton as having been “repeatedly blasted” by Trump in 2016 “for mishandling information and e-mails.”

CIA puppet and Justice correspondent Ken Dilanian took the spot of providing analysis and, predictably, he gave his friends in the intelligence community the full benefit of the doubt (click “expand”):

DILANIAN: [N]ormally, if an ex-president has documents he shouldn’t have, the government would simply ask for them back. This move suggests something broke down in a big way between Trump and the Archives and that these documents may have contained some very sensitive information. This move doesn’t mean Trump will be charged, Savannah, but it’s a big deal.

GUTHRIE: Well, what would the FBI have to establish to get a federal judge to authorize a warrant of this nature?

DILANIAN: The FBI would have had to convince the federal judge that there was evidence of a crime inside Trump’s Florida home and that a search was the only way to retrieve it. And multiple people told us they were after — what — the FBI was trying to recover boxes of documents that may have included highly classified information and that they left there with lots of material.

GUTHRIE: How specific do they have to be about exactly what they’re looking for? In other words, can this be some kind of fishing expedition?

DILANIAN: It can’t be a fishing expedition. They have to tell the judge exactly what they’re looking for and they have to file a document with the court saying what they took. But it’s also true that, if they find evidence of other crimes, they’re free to seize that [sic] materials.

GUTHRIE: Is there any reason to believe this warrant and this search has anything to do with something other than the National Archives case which you just laid out and the 15 boxes that the Archives got and then they referred it to the Justice Department?

DILANIAN: [W]e’ve asked that question, Savannah and we’re being told you can’t really rule everything out. We have to be humble about what we don’t know here.

GUTHRIE: [T]he President has described this as a raid, said Mar-a-Lago was under siege, it was broken into. Do you have any information about how this search was conducted?

DILANIAN: Yeah. Officials I’ve spoken to have pushed back on describing this as a raid….[T]his warrant signed by a judge gave the FBI the authority to force its way into the house if that’s what agents needed to do.

To see the relevant transcripts from August 9, click here (for ABC), here (for CBS), and here (for NBC).