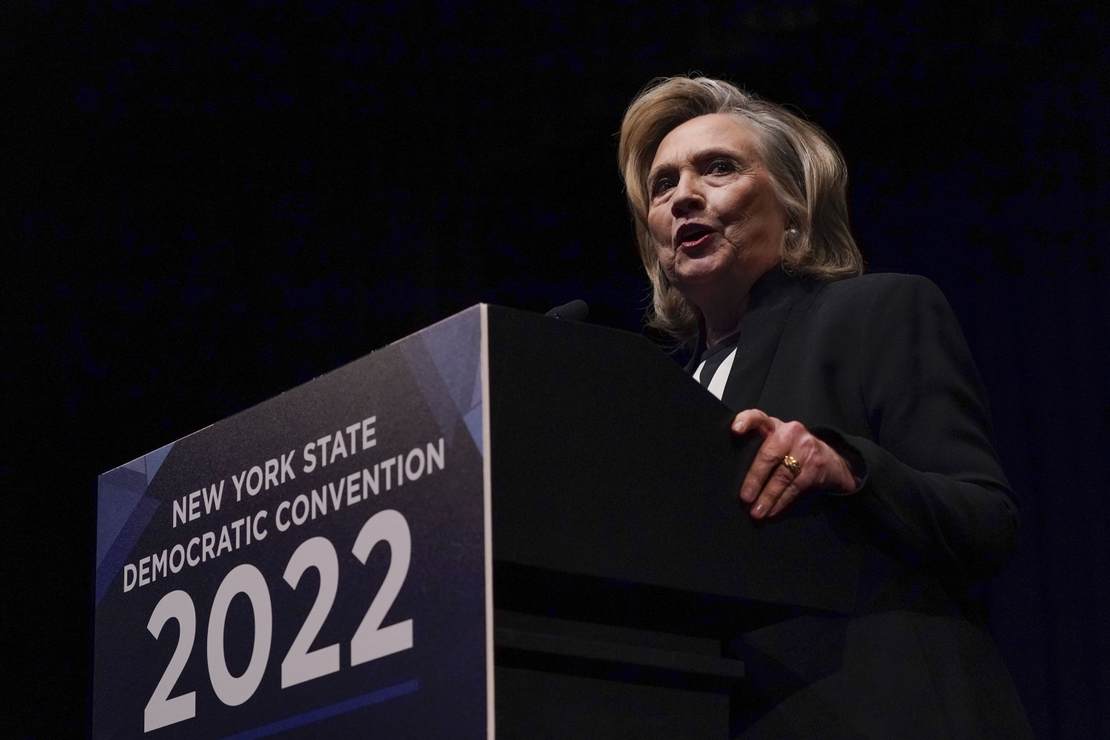 While pundits are still debating whether or not the FBI raid on Mar-a-Lago helps or hurts Trump’s 2024 chances (psst, it helps), no one seems to be talking about the one person with an actual ax to grind against 45 and a proven history of political monkeyshines intended to bring him down.

All of these things are true:

I can’t be the only person who noticed that the Hilldabeast immediately began pushing her hats for sale that read, “But her emails” almost at the moment the FBI was going through Melania Trump’s underwear drawer. A not-so-humble brag about being untouchable.

Notice the airbrushing on her face. Clearly, her server wasn’t the only thing to get an acid bath.

JUST IN: Oddly Enough, Hillary Clinton is Promoting the Sale of a Hat That Says: “But Her Emails” pic.twitter.com/OyI6Zcoy1C

FACT-O-RAMA! Hillary deleted 33,000 subpoenaed emails and got away with it. Now she is mocking the nation by selling these hats. Your progressive sister-in-law and her man-bunned, non-binary partner have probably ordered three, one for each of them and a third for their favorite abortionist.

If her hats sell as well as her 2016 book Stronger Together, you’re more likely to see a sasquatch at a Steak and Shake drive-thru than her narcissistic cap on some lib’s vacant noodle. It looks more like a middle finger to Trump than an actual fundraising gimmick.

Within minutes of Hillary tweeting about her hat, the liberal lickspittles in the commie media did their part. Google the words “Hillary Trolls” and see how many nearly identical articles appear, even one from India that claims Trump “threw a fit” in the headline but failed to back up the claim in a poorly translated article.

Hillary used her hat to try to troll Trump back in February 2022 when New York Times hatchet-harpy Maggie Haberman claimed the toilets at the White House were clogged with documents Trump tore up and flushed.

Trump got the last laugh when Special Counsel John Durham said Hillary’s people were involved in trying to link Trump with the Kremlin. Trump spanked Hillary with the following statement:

The latest pleading from Special Counsel Robert Durham provides indisputable evidence that my campaign and presidency were spied on by operatives paid by the Hillary Clinton Campaign in an effort to develop a completely fabricated connection to Russia. This is a scandal far greater in scope and magnitude than Watergate and those who were involved in and knew about this spying operation should be subject to criminal prosecution. In a stronger period of time in our country, this crime would have been punishable by death. In addition, reparations should be paid to those in our country who have been damaged by this.

Hillary gave a speech in February 2022, ostensibly for the New York State Democrat Convention, where she launched into national, rather than state, topics just after the three-minute mark. She kicked into her classic harridan mode. Gee, I wonder who she is talking about when she says, “Democracy needs champions.”

I suspect Hillary is running in 2024. Hillary has a history of trying to sink the USS Trump, and Durham has the receipts. Hillary knows she is untouchable (and she’s a narcissist) and will sell you a hat proving it for $30. Former Hillary attorney Marc Elias was quick to tweet that the Mar-a-Lago raid could keep Trump out of the 2024 election. Look, he even had the exact code ready to go.

The media is missing the really, really big reason why the raid today is a potential blockbuster in American politics.👇 pic.twitter.com/3BdI9NA9Az

Was Hillary in on this? Let me now in the comments.