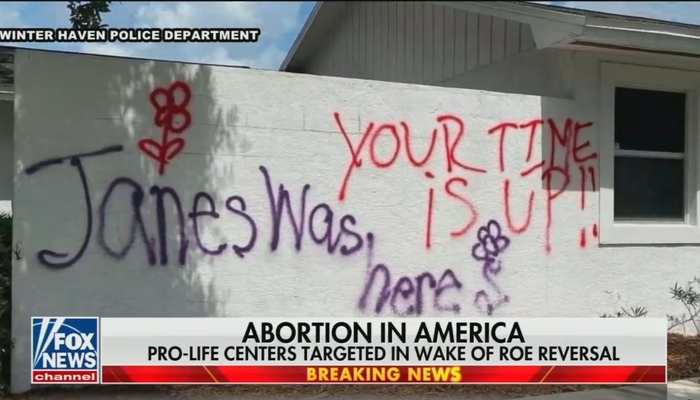 The Atlantic styles itself as the outlet for the more intellectual and sophisticated news consumer and on Friday it raised an important question “Just how meaningful is Jane’s Revenge?”

The question was raised by staff writer Kaitlyn Tiffany and the answer would appear to be self-evident as the article’s subheadline reads “A mysterious pro-abortion-rights group is claiming credit for acts of vandalism around the country, and right-wing activists and politicians are eating it up.”

In the article’s second paragraph, Tiffany continued with the “conservatives pounce” angle, “Right-wing media outlets have provided ample coverage of this new threat, and anti-abortion politicians have demanded government action to address it. But the group’s practical significance remains in question. Just how meaningful is Jane’s Revenge?”

Tiffany also cited how Jane’s Revenge has taken credit for acts of violence across 16 cities including “the offices of a Christian-fundamentalist lobbying group in Madison, Wisconsin.”

Still, Tiffany didn’t see what the big deal was, “But at this point nothing indicates that the authors of the anonymous blog posts have any real connection to the actions they cite.”

The story isn’t that pro-lifers are being targeted, it’s that Republicans are calling attention to it:

Erin Gallagher, a research assistant at Harvard’s Shorenstein Center… found major nodes of activity at the Twitter accounts of Senator Josh Hawley of Missouri … and the right-wing journalist Andy Ngo … In other words, Hawley and Ngo are among the figures driving the most discussion of the group. ‘I think it’s helpful to see whose voices are dominating a particular conversation on Twitter, especially when elected officials are prominent in the discussion,’ Gallagher told me recently. ‘Content about their ideological enemies doing evil things likely performs very well.’

Tiffany also noted that “news articles about the threat of Jane’s Revenge have also clustered at conservative sources.”

That would suggest that non-conservative sources are refusing to cover something that contradicts their narrative that violence is a pro-life or right-wing phenomenon, but Tiffany declared it actually proves conservatives are exaggerating:

That includes specific incidents of arson for which Jane’s Revenge has claimed credit in its blog posts, but also many other property crimes, such as smashed windows and pro-abortion-rights graffiti. One report on the list describes a fire at a Catholic bookstore that has not been ruled an arson, much less a politically charged attack. Eleven other instances of reported vandalism or suspected arson on the list have no obvious ties to Jane’s Revenge or the Dobbs decision.”

The media will tie every possible extremist to the GOP, but no less than 16 examples of left-wingers engaging violence:

does not imply the existence of a complex, coordinated campaign of violence. ‘Looking at the way in which the moral panic around antifa operated throughout the Trump years is a really good way of understanding what’s happening now with the Jane’s Revenge activity,’ Stanislav Vysotsky, a sociologist and the author of the 2020 book American Antifa, told me.

Ultimately, Tiffany decided to blame the victims, “A fixation on the threat of “Jane’s Revenge” may ultimately contribute to its spread, Vysotsky told me. Something similar happened with antifa: After the election of Donald Trump and the outbreak of violence at the “Unite the Right” rally in Charlottesville, Virginia, right-leaning media outlets kept talking about the group, and raised its profile among a certain segment of sympathetic listeners. All that publicity helped build support, Vysotsky said.”

No, that was all the comparisons to D-Day soldiers. Even if, for the sake of discussion, Tiffany is right about Jane’s Revenge, the story should still be about widespread pro-abortion violence, not how pro-lifers are reacting.