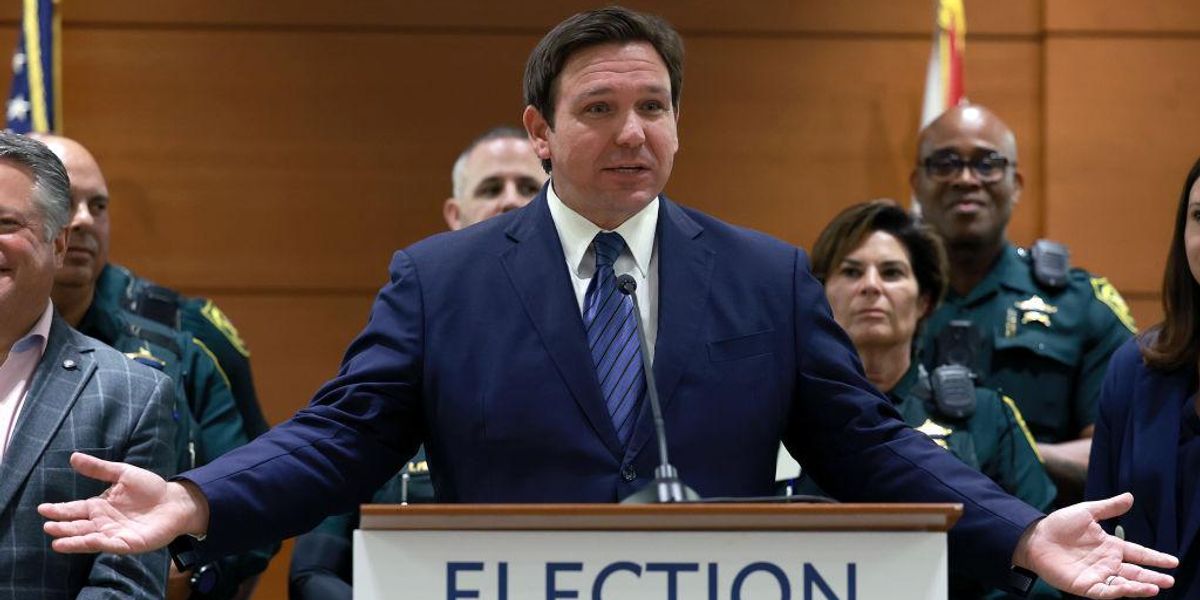 On Thursday, Florida Governor Ron DeSantis announced that 20 individuals are being arrested for alleged voter fraud. The governor said that, despite their felony records preventing them from legally being able to vote, they cast a ballot in the 2020 election.

DeSantis thanked the Florida Office of Election Crimes and Security and the Florida Department of Law Enforcement for conducting the investigation.

The 20 individuals were previously convicted of felonies, including murder or a sexual offense, removing their right to vote in elections. The suspects are now facing a third-degree felony charge for voter fraud that could result in a maximum $5,000 fine and a five-year prison sentence.

During a press conference on Thursday, Governor Ron DeSantis said, “In 2020, Florida ran an efficient, transparent election that avoided the major problems we saw in other states. At the same time, the election was not perfect, which is why we continue our efforts to ensure the integrity of our elections.”

“Our new election crimes office has sprung into action to hold individuals accountable for voter fraud. Today’s actions send a clear signal to those who are thinking about ballot harvesting or fraudulently voting. If you commit an elections crime, you will be prosecuted to the fullest extent of the law,” DeSantis continued.

Governor DeSantis announced last year that his administration would be taking steps to prioritize ensuring secure elections. In March, Florida passed legislation to create the Office of Election Crimes and Security, dedicated to securing election integrity through “pre- and post-election audits, continual assessment and strengthening of our elections cybersecurity, and developing partnerships.”

Thursday’s arrests marked the first investigation conducted by the department.

u201cIn 2020, FL ran one of the most secure & transparent elections in the US, but we have more work to do. That’s why I established an election crimes unit. nn@fdlepio has charged 20 murderers & sex offenders who weren’t eligible to vote w/ election fraud. They face 5 yrs in prison.u201d

Director of the Office of Election Crimes and Security Peter Antonacci said, “And you may think that 20 voters is not a lot, but you’re in Broward County, and you know that you just elected a person to congress here – this year – by five votes.”

“It’s not just going to be 20 arrests. This is the opening salvo of an office that was just set up on July 1,” DeSantis stated.

CBS News reported that some are concerned that DeSantis’ new election crimes office will intimidate voters. The president of the League of Women Voters of Florida, Cecile Scoon, told the news outlet that she is worried about how law enforcement will be utilized.

During the press conference on Thursday, FDLE Acting Commissioner Mark Glass assured the public that the voter fraud investigations protect law-abiding citizens. He said, “In Florida, your vote matters. To that end, we will do everything in our power to ensure those who cannot legally vote never cast a ballot.”

House Republicans push bill that would nix IRS funding from the ‘Inflation Reduction Act’ and reallocate it for CBP to hire agents to secure the southern border
Column: CBS Is Not ‘Going Rogue’ on January 6 Committee
UPDATE: Free Elections? Google-Owned YouTube CANCELS ‘Entire Day’ of Content from CPAC Texas
When the Washington Post Breaks Out ‘Both-Sidesism’ — Victims of Communism Museum!!
The Day the Vast Right-Wing Conspiracy Died