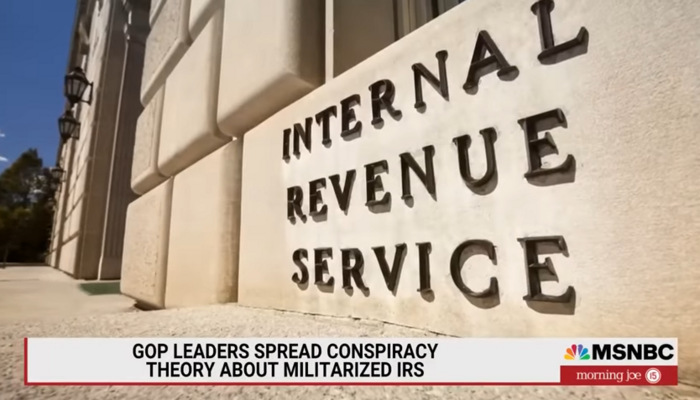 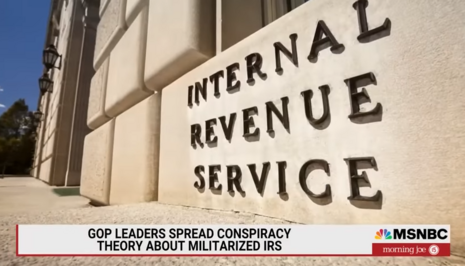 The New York Times’ Alan Rappeport and Tiffany Hsu devoted 1,500 words to dismissing conservative concerns over potential IRS overreach, after news the agency is hiring 87,000 new agents, at least some of whom will carry firearms. The headline on the front of the Business section Friday read “Right-Wing Fury at I.R.S. Overhaul.” The online headline was more specific: “More Money for I.R.S. Spurs Conspiracy Theories of ‘Shadow Army.’”

Typically, conservative concerns and predictions were dismissed by the paper as “conspiracy theories.” The Times has a history of bolstering the IRS and catching GOP tax cheats, in the name of fighting income inequality. As for empathy for taxpayers unfairly victimized by overzealous IRS audits? Never a priority.

It has been called President Biden’s “shadow army,” described as a strike force to shake down small businesses with assault rifles and likened to a militia of auditors on search-and-destroy missions.

After poormouthing the “beleaguered agency,” the Times mislabeled dire predictions from Republicans, who “have seized on the law to fan unfounded conspiracy theories about the threat that mom-and-pop shops and middle-class Americans will face from an emboldened tax collector.”

The reporters whined “Republicans have embraced the notion that a bigger I.R.S. is poised to be weaponized against them, often distorting facts to make their points….Republicans have amped up their efforts to demonize the I.R.S., including misconstruing how big it will grow and what new employees will be doing.”

And despite claims on social media that the I.R.S. hires will be heavily armed, a Treasury official said that just 1 percent of the new employees would be agents working in jobs that require carrying guns.

Eventually they had to deal with the inconvenient fact the IRS really did post a job stressing applicants must be “willing to use deadly force, if necessary.” (The IRS later deleted that line.) Even then, the Times let an IRS spokesman have the last, lame word on the matter.

To their credit, Rappeport and Hsu admitted:

The I.R.S. has acted inappropriately in the past, including unfairly targeting conservative groups that applied for tax-exempt status during the Obama administration. In 2013, the agency acknowledged that it had been singling out terms such as “Tea Party” and “patriot” as a shortcut for deciding if organizations were engaging in social welfare, which would qualify them for tax-exempt status, or if they might be political organizations….

But the following condescending, trust-the-government explanation was meant to soothe our ears: If you haven’t done anything wrong, why are you worried? In years past, the left would have surely mocked a defense of a government agency that assured citizens that agents won’t use their guns “without good reason.”

John Koskinen, who served as I.R.S. commissioner in the Obama and Trump administrations, said that he thought the attacks on the agency by Republican lawmakers were irresponsible and that he worried that they could lead to violence against members of the agency. He suggested that the only taxpayers who would end up having to pay more were those who were not paying their taxes, and said that agents do not wield their weapons without good reason.

STUNNING Report in The Atlantic: Did Famous Doctor’s COVID Shot Make His Cancer Worse?
Texas man hit and killed a pedestrian but didn’t realize it until he found the body later on the roof of his car, police said
Wimps: WaPo Urges Colleges To Provide Counseling Over ‘Climate Anxiety’
Insect-protein startup raises $250 million in funding
Biden’s Handlers Still Clinging to Iran Nuke Deal as Iranian Government Kills Its Own People