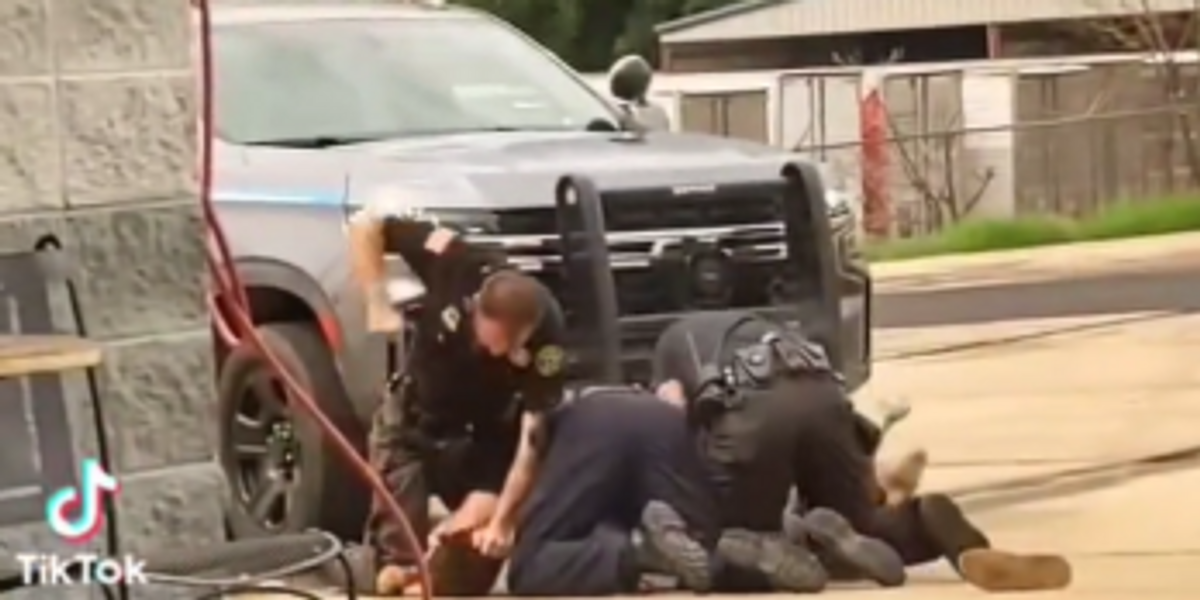 Three officers in Arkansas have been suspended after they were caught on video pummeling a man on the pavement.

Two Crawford County Deputies and a Mulberry Police officer were suspended after a video exposed a disturbing and violent arrest at a convenience store in Mulberry.

Around 10 a.m. on Sunday, authorities were notified that a man was making terroristic threats to a convenience store employee, according to Sheriff Jimmy Damante with the Crawford County Sheriff’s Office (CCSO).

KFSM-TV reported, “The suspect allegedly spit on the employee and threatened to ‘cut off their face.'”

Sheriff Damante claimed that the conversation began calm, but escalated after the man attacked one of the deputies. He allegedly pushed the deputy to the ground and punched him in the head.

A female is heard screaming at the cops, “Stop beating the s**t out of him!”

Another officer points a finger.

The police stop roughing up the man, and the video abruptly ends.

The three officers were suspended pending the outcome of the investigation, according to Damante.

Damante said on Facebook, “I hold all my employees accountable for their actions and will take appropriate measures in this matter.”

The Mulberry Police Department issued a statement on the incident:

The video of the excessive use of force raised eyebrows among many of those who viewed it online, and there were numerous accusations of police brutality.

The name of the suspect has yet to be released.

He was reportedly booked into jail and then taken to a local hospital.

Sheriff Damante said the man faces charges of terroristic threatening, resisting arrest, 2nd-degree battery, trespassing, aggravated assault, and being in possession of an instrument of crime.

Arkansas Gov. Asa Hutchinson said, “I have spoken with Col. Bill Bryant of the Arkansas State Police and the local arrest incident in Crawford County will be investigated pursuant to the video evidence and the request of the prosecuting attorney.”

12-year-old girl allegedly shoots her father and herself as part of a murder pact with another girl
Could the Red Wave Actually Be a Tsunami?
Texas sheriff won’t investigate voter fraud allegations against Democrat candidate leveled in police bodycam video
Google co-founder’s flying car startup is shutting down
Florida in PANIC ahead of Hurricane Ian making landfall: Grocery shelves EMPTY