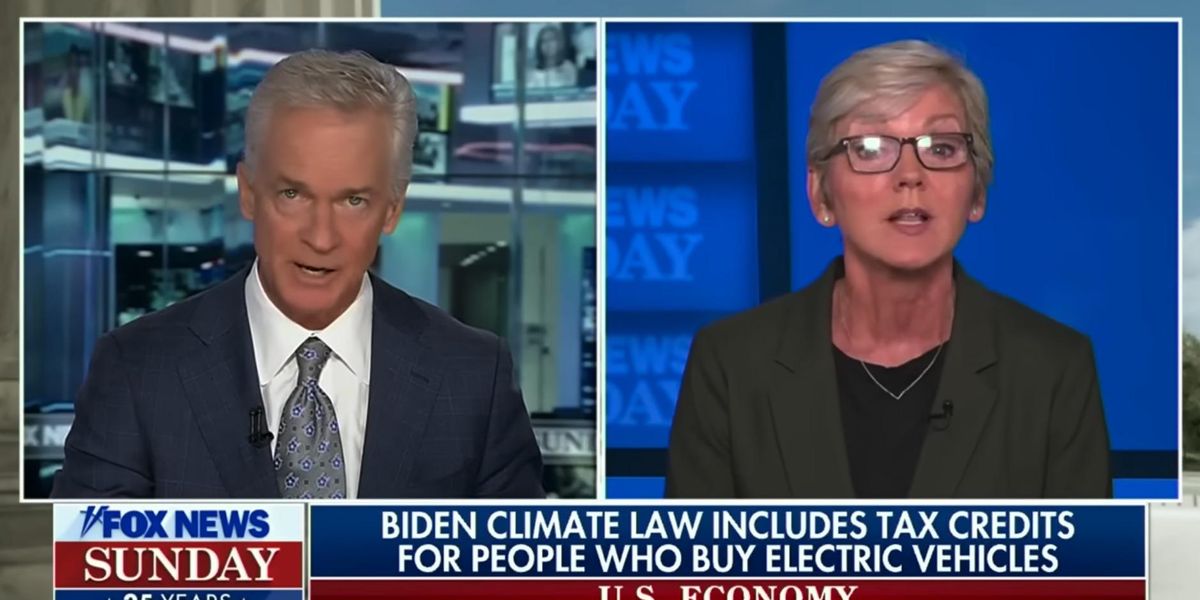 Energy Secretary Jennifer Granholm claimed Sunday that low-income Americans can rely on the Inflation Reduction Act to help them because the law provides tax incentives for installing clean energy features.

What did Granholm say?

Speaking on “Fox & Friends,” Granholm responded to criticism that tax credits built into the Inflation Reduction Act only financially benefit Americans who can afford clean-energy items like solar panels and energy-efficient appliances.

Shockingly, Granholm claimed even low-income Americans, those with the least disposable income, also benefit — by spending imaginary money they probably do not have.

“If you are low-income, you can get your home entirely weatherized through the expansion from the bipartisan infrastructure laws, a significant expansion — you don’t have to pay for anything,” she said. “If you want heat pumps, insulation, new windows, that is covered.

“If you are moderate-income, today you can get 30% off the price of solar panels. Those solar panels can be financed, so you don’t have to have the big outlay at the front,” she added. “If you don’t qualify for the weatherization program, you will be able to, starting next year, get rebates on the appliances and equipment that will help you reduce your monthly energy bill by up to 30%. That is all about reducing costs for people.”

There are several critical problems with Granholm’s response, underscoring how out of touch her comments are with the everyday realities of most, and especially poorer, Americans.

First, low-income Americans, precisely because they are stuck in poverty or cannot get better-paying jobs, are less likely to own a home. Thus, if they are renters, they probably do not have the option to significantly modify their landlord’s property by installing solar panels and other “weatherizing” features. And even if their landowner installs such items, they would not benefit — their landlord would.

Second, solar panels, for example, are not cheap. According to Consumer Affairs, installing a 6-kW system will cost most Americans between $13,000 and $17,000, depending on where they live. Windows, appliances, and other green-energy “weatherizing” features are not cheap, either.

Third, Granholm oversold the benefits of the law.

The rebate portion of the law (“High-Efficiency Electric Home Rebate Act”) sets a maximum rebate amount at $14,000, the majority of which goes toward heat pump upgrades. The rebate for appliance upgrades, like the heat pump for a dryer or an energy-efficient stove, is set at a maximum of $840. And only those items that “meet or exceed the highest efficiency tier” as established by the Consortium for Energy Efficiency qualify for the benefit.

Meanwhile, the rebate for “weatherizing” your home by making improvements to insulation, air sealing, and ventilation maxes out at $1,600, while the credit for expensive Energy Star-approved windows maxes out at $600, and the benefit for installing energy-efficient exterior doors maxes out at $500.

Regarding solar panels, the Residential Clean Energy Credit provides a tax credit of 30% of the cost associated with installing solar energy equipment. This is only a 4% increase over the previous tax credit amount.

Finally, with an overheated economy and sky-inflation that decreases the purchasing power of every dollar, most Americans have fewer dollars to spend on energy-efficient items and electric vehicles.

Instead, they’re most concerned with paying rent or their mortgage, putting food on their tables, and making ends meet in general — not using what little extra money they have to install solar panels or expensive new windows.

The Day the Vast Right-Wing Conspiracy Died
WATCH: Levin Torches ‘Dummy’ Biden Forcing U.S. to Commit ‘National Suicide’ Over Climate Change
Biden Administration Keeps Negotiating With Iran Even as Protesters Are Gunned Down in the Street
Gavin Newsom warns Democrats that Fox News hosts are dominating politics: ‘We are getting crushed’
Nets Yawn at Bloody Violence in Soros-Backed DA’s Philly