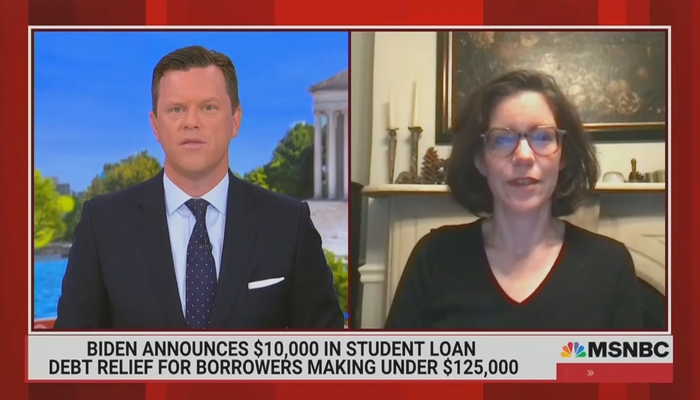 There was a host of criticism, starting with Geist himself, and even including “MSNBC Republican” Elise Jordan, who normally sides with the Democrats. “I guess what I find annoying about it, is that it doesn’t address the higher-education cartel. And it basically is infusing money into a higher-education system that is basically just corrupt at this point,” she said.

Various former Democrat officials were also quoted in opposition. And former Obama car czar Steve Rattner, Morning Joe‘s economic analyst, spoke against the proposal. “I think, by far, the biggest issue is the issue of fairness (…)  People like your family that worked hard, took an extra job to put their kids through college so he didn’t have to graduate with debt don’t get anything from this,” he said.

Perhaps most amazingly, the show had as a guest Megan McArdle, an actual unreconstructed libertarian, who of course was very critical of the proposal.

The only defenders of the proposal on the panel were Al Sharpton, who said he actually wanted $50,000 in forgiveness rather than the $10-20,000 Biden’s plan provides, and Mike Barnicle, who said Republican criticisms should be completely ignored, calling them “preposterous.”

But, contrary to Barnicle’s claim that Republican criticisms are “preposterous, those criticisms focused on the issue of fairness. And that is the root of most of the criticism, coming from across the political spectrum. As Geist put it: 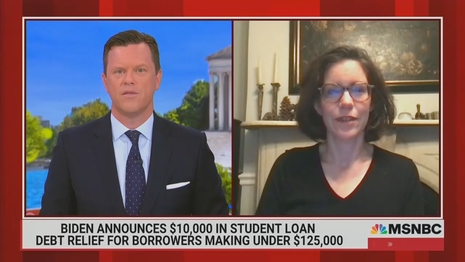 And Rattner suggested that the fairness backlash to Biden’s plan could lead to the creation of something similar to the Tea Party. Rattner recalled that the Tea Party was created in 2009 after CNBC’s Rick Santelli went on an epic rant over the unfairness to people who had been responsible for their home borrowing, in contrast with the huge government bailout of people who had defaulted on their mortgages.

So, when Joe and Mika are away, will Willie play, and be more evenhanded on the issues?

Then again, at the conclusion of the segment, Geist did salvage some liberal street cred, saying: “at the end of the day, 43 million people will have a little bit easier time getting through their day.”

Morning Joe being surprisingly critical of Biden’s student-loan forgiveness plan was sponsored in part by Abbott, maker of Rinvoq, and Subway.

JOE BIDEN: Independent experts agree that these actions, taken together, will provide real benefits for families without meaningful effect on inflation.

ELIZABETH WARREN: Let’s just celebrate because, understand, 20 million Americans got the news today that they will never have to pay another nickel on student-loan debts.

RO KHANNA: Young people, people who are trying to make end’s meet, they as it is are struggling. And so to ask them to be paying back their student loans right now with a difficult economy is just wrong.

AYANNA PRESSLEY: This is an unprecedented step to alleviate the burden that people are feeling.

MITCH MCCONELL: I think it’s a bad idea. I’m sure the people who will benefit from it will love it. The question is, is it fair to everyone else?

J.D. VANCE: That’s exactly what this is, a massive bailout for people who have made bad decisions and are doing very well economically.

MARJORIE TAYLOR GREENE: It’s completely unfair. Hard-working people, they shouldn’t have to pay off the great big student loan debt for some college student that piled up massive debt going to some Ivy League school.

AL SHARPTON: Definitely was a campaign promise, and it definitely will be a relief for millions of people. And it definitely is a step in the direction that we wanted this president to go. And many of us voted for him to go. Now, did we want him to go further? Yes. Will we always want him to go further? Yes. But he’s gone further than anyone else has gone . . . I wish we could have done $50,000, but I’m glad we got $10,000.

GEIST: It’s not just Republicans who have criticisms of this. It’s a lot of working people, Democrats, independents who feel like they’re footing the bill.

MIKE BARNICLE: Given the divisions in this country today that exist, it’s amazing that he did it yesterday. In the face of all the clamor that will surround it, no doubt. The first thing that should really consider do is just to completely ignore the criticisms of people like J.D. Vance, who we saw in the clip, and Marjorie Taylor Greene. They are preposterous in their criticisms of it.

ELISE JORDAN: I guess what I find annoying about it, is that it doesn’t address the higher-education cartel. And it basically is infusing money into a higher-education system that is basically just corrupt at this point. You look at how much tuition has just skyrocketed —

JORDAN: And that’s just absurd. And it doesn’t do anything — that’s not accessible for the majority of Americans. It’s just, it’s absolutely obscene.

GEIST: And the other thing is, a lot of these schools we’re talking about have billions and billions of dollars sitting in endowments.

GEIST: Collecting interests for generations . . . Well, there are economic, there are moral, even legal arguments against forgiving student debt in this way. Last year, even Speaker Nancy Pelosi said, the President of the United States does not have the authority to cancel debt.

NANCY PELOSI: People think that the President of the United States has the power for debt forgiveness. He does not. He can postpone. He can delay. But he does not have that power. That would, that has to be an act of Congress.

GEIST: That was in July of last year. A former top lawyer at the Department of Education under Barack Obama telling the Wall Street Journal, it is, quote, doubtful the courts will let this stand.

And a former economic adviser for President Obama tweeted this, quote, pouring roughly half-trillion dollars of gasoline on the inflationary fire that is already burning is reckless.

The Wall Street Journal editorial board calls it a moral hazard, writing, in part, those who will pay for this write-off are the tens of millions of Americans who didn’t go to college, or repaid their debt, or skimped and saved to go to college, or chose lower-cost schools to avoid a debt trap. This is a college graduate bailout, paid for by plumbers and FedEx drivers.

STEVE RATTNER: I think, by far, the biggest issue is the issue of fairness that you alluded to in various of the other conversations. Half of Americans who don’t go to college don’t benefit from this. People like your family that worked hard, took an extra job to put their kids through college so he didn’t have to graduate with debt don’t get anything from this. There are substantial questions of fairness here in terms of who’s going to benefit and who’s going to be left without really getting any benefit from this?

GEIST: Megan, your piece in the Washington Post is titled “Biden’s student loan fix: It’s perfect for making the problem worse.” There certainly are a lot of people out there this morning who feel like suckers for having worked a second job or having paid off their student loans or gone to a college maybe they thought they could afford versus one they’d have to pay off for, you know, 20 or 30 years. So what’s your, let’s break down your piece a little bit. What’s at the core of your argument against this?

MEGAN MCARDLE: Look, I agree with Mr. Rattner. There are a lot of reasons this is problematic. It causes fairness problems for people who worked hard to pay off debt, or to put kids through school without debt.

But it also is going to create pressure for future such bailouts. You look at the graduates, the people who are enrolling in college next year, right? They are getting the reduction to a 5% rate on their income-based payment. But they’re not getting the $10,000. And they’re going to look at that and say, look, tuition’s still going up. Why-this is unfair. And they are going to say to the administration, what about me?

You’re kind of creating this pressure to keep doing this over and over again, and it’s not fixing it. It’s not only not fixing the problem of rising college costs, it’s actually making that problem worse.

GEIST: So Rev, what about the fairness question? I’ll let you take it to Megan. But people, the majority of Americans don’t have a four-year college degree. Andd they’re saying, wait a minute, why am I paying for people who went to college, took out big loans, and then got that wiped out in tax increases, in this half a trillion dollars, potentially, that is going to have to be spent to cover it. What do you say to that?

SHARPTON: I mean, I think you understand that feeling. But at the, in the same way, I think that a lot of people would say, I’m glad to see people may not have to go through what I went through.

RATTNER: You’ll remember, back in 2009, we passed $75 billion of homeowner relief as part of the response to the financial crisis. As a result of that, literally the day after, Rick Santelli went on the floor of the Chicago MERC, a CNBC reporter, and started a rant that turned into the Tea Party. And it was all over these fairness issues. It was all over the question of someone who had bought a house he couldn’t really afford, put on too much mortgage debt, gone to Disney World, whatever, and now is being bailed out by the government. Versus someone that acted responsibly.

I agree with what the Rev said, that this is a different issue in the sense that people are borrowing this money to go to college, and that’s a responsible thing to do, in a way. But this basic issue of fairness that gave rise to the Tea Party, in fact, is going to be something I think we hear an awful lot about in the coming days.

GEIST: We’ll see how it plays out. But at the end of the day, 43 million people will have a little bit easier time getting through their day.

MSNBC Admiral’s Weird Metaphor: Putin’s Draftees for Ukraine Are Like NYC Bartenders
White House expected to publish privacy-focused executive order next week
After tweeting ‘We should use they/them pronouns for hurricane Ian to annoy DeSantis,’ Rachel Vindman deletes her post ‘because it was offensive to the trans community’
Matt Walsh Holding ‘Rally To End Child Mutilation’ in Tennessee
Bill Gates Now Shilling ‘Magic Seeds’ Made with His Foundation’s Funding