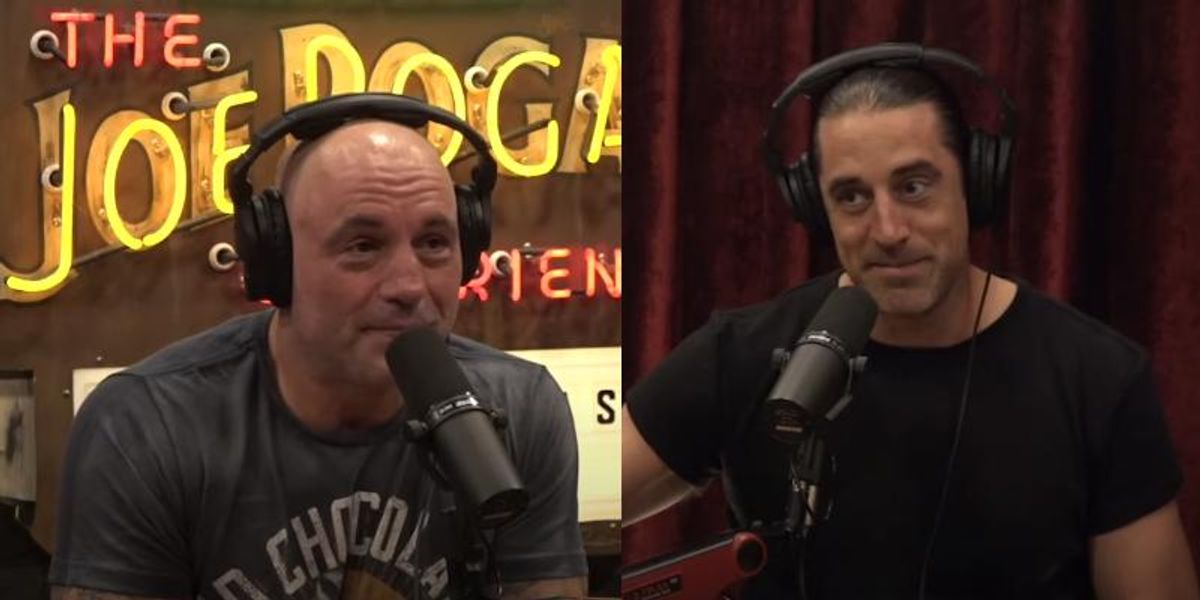 Aaron Rodgers delivered attention-grabbing details of the saga he endured with the NFL after he refused to get the COVID vaccine during a 3-hour interview with Joe Rogan. Rodgers said that the NFL discriminated against unvaccinated players in the latest episode of “The Joe Rogan Experience.”

Rodgers said that he is allergic to polyethylene glycol — also known as PEG — which is an ingredient in the Pfizer and Moderna COVID-19 vaccines. The Centers for Disease Control and Prevention (CDC) recommends that people allergic to PEG not take the mRNA vaccines. Rodgers passed on the Johnson & Johnson COVID-19 vaccine because of blood clot issues.

Rodgers said he would wear a yellow wristband that signaled that he was unvaccinated. He also had to wear a face mask at all times – whereas vaccinated players did not.

“There was a lot of public shaming that was attempted to coerce people to get vaccinated because not only are you wearing a yellow wristband, you’re the only ones wearing masks,” Rodgers noted.

“I think now we all realize these were crazy policies,” he said.

Rodgers pointed out how players on the bubble who were unvaccinated had an “almost 0% opportunity to get a workout.” He said that unvaccinated NFL players had a “very low percentage not just of keeping a job but even getting a job.”

“Look how righteous our league is, we have 95% compliance with the vaccine,” Rodgers mocked the NFL. “If you don’t, we’re going to send a stooge to your team to show you graphs of your vaccination percentage of your team compared to the rest of the league, which actually happened.”

On the third day of training camp, Rodgers asked the “stooge” about liability from vaccine injuries, which was answered, “Oh, I’m not a lawyer.”

Beasley – an outspoken critic of COVID vaccines and NFL pandemic protocols– said, “Same ‘stooge’ came to the Bills along w/ Bruce Smith telling us we didn’t care about winning or our teammates if we didn’t get the vaccine. I didn’t get Covid until the NFL stopped testing all the vaxxed players because they all were getting it.”

u201cSame u201cstoogeu201d came to the bills along w/ Bruce smith telling us we didnu2019t care about winning or our teammates if we didnu2019t get the vaccine. I didnu2019t get Covid until the nfl stopped testing all the vaxxed players because they all were getting it.u201d

Rodgers had a game plan for when the NFL officials were going to ask about his vaccination status.

“So I’ve been ready the entire time for this question, and had thought about how I wanted to answer it,” the Green Bay Packers quarterback said. “And I had come to a conclusion as to what I’m gonna say, ‘I’ve been immunized.’ And if there’s a follow-up, then talk about my process.”

Rodgers said there was no follow-up question about specifically being vaccinated against COVID-19.

“They didn’t follow up,” he revealed. “So then I go to season them thinking, some of them that I was vaccinated.”

Rodgers said that NFL officials were “basically asking me to rip on my teammates,” by revealing if they weren’t vaccinated.

“I said it’s everybody’s own decision with their body and we’re super healthy individuals, we take care of ourselves, we understand what goes on our bodies, and I don’t have any judgment on any decision that a guy makes,” the legendary football player noted.

Then the media found out that Rodgers had not been vaccinated against COVID.

“And that’s when the s**tstorm hit because now I’m a liar,” Rodgers said, calling it an “attempted takedown of me and my word and my integrity.”

Rodgers recalled contracting COVID-19, and he was feeling “amazing” within 36 hours. He credited Rogan for helping him with effective treatments.

“So I’m super healthy and take care of myself really well,” Rodgers declared. “And oh, by the way, I just went from really bad symptoms to 36 hours later feeling great.”

“I didn’t like the characterization that I put people in danger, that I endangered my teammates, I lied to my teammates,” the legendary QB stated. “I said from day one, they knew medical staff, everybody in the organization, everybody knew I’m wearing a yellow wristband. Everybody knew my status.”

Rodgers presented the NFL with “500 pages of research from a number of people that put together case reviewed studies around homeopathy and immunizations and safety in them and also the efficacy of them.” An NFL official allegedly called Rodgers a “conspiracy theorist.” Rodgers rebutted, “No, I just think I’m a realist. I’m just looking at the facts here.”

Rodgers highlighted that the media lied and said Rogan was taking “horse dewormer.” He also laughed that Rogan “mopped the floor” with the CNN medical analyst Sanjay Gupta.

Rogan said at the height of the pandemic, the persecution of unvaccinated people “was like McCarthyism.”

“It was like a Red Scare – like everyone was looking for communists,” Rogan remarked. “They were just looking for non-vaxxers. It was like a fever in the air because people had been convinced that this was the thing that was going to get us out of the pandemic and if you didn’t follow that thing that you were the enemy of it.”

Rodgers talked about people like Keith Olbermann, who would demand, “Just get the damn jab and I’m like.” Rogan said Olberman is the “gift that keeps giving” and he is “f***ing hilarious, unintentionally.”

Rogan pointed out how Dr. Deborah Birx – COVID-19 response coordinator under former President Donald Trump – changed her tune and said last month, “I knew these vaccines were not going to protect against infection. And I think we overplayed the vaccines, and it made people then worry that it’s not going to protect against severe disease and hospitalization. It will. But let’s be very clear: 50% of the people who died from the omicron surge were older, vaccinated.”

The prolific podcast host and football player also recalled how President Joe Biden tried to terrify Americans about the pandemic in December 2021 by saying, “We are looking at a winter of severe illness and death for the unvaccinated, for themselves, their families, and the hospitals they’ll soon overwhelm.’

Rogan joked, “Yeah. It’s like they were ‘Game of Thrones.’ They were talking about the f***ing white walkers coming, a winter of death.”

u201cu201cLetu2019s not revise history on what actually happened and what was said.u201dnnJoe Rogan and Aaron Rodgers discuss how the Mainstream Media and The Biden Administration doubled down on COVID vaccine misinformation.u201d

Rodgers said questioning the official COVID narrative was “not allowed,” and anyone who did was branded as an “anti-vaxxer, flat-Earth, crazy rightwing conspiracy theorist.”

Rodgers slammed the government for closing small businesses – and bankrupting many of them,

u201cu201cHow many thousands of small businesses closed and never opened again?u201dnnAaron Rodgers and Joe Rogan discuss how the COVID lockdowns ruined the small businesses in America.u201d

Rogan and Rodgers expressed their concern with the plans of the World Economic Forum.

u201cu201cYou will own nothing and be happy.u201dnnJoe Rogan and Aaron Rodgers mock the insanity of the World Economic Forum.u201d

Rodgers revealed that he has played NFL games while under the influence of Percocet because of injuries.

“The pain management, especially with our sport, is fascinating to see how things are ‘treated.’ I use quotations on treated because, up until probably a decade ago, it was easily accessible to get oxy, Percocet, Vicodin, whatever you wanted. … you played [on painkillers], definitely,” Rodgers said.

“[I played] on Percocet,” he admitted. “It was more for pain management, so I wasn’t taking any high dosage, but stupid, ultimately.”

You can watch the entire “The Joe Rogan Experience” interview with Aaron Rodgers below.